Anthony Garnica: I’m the type of fighter that isn’t afraid of anybody 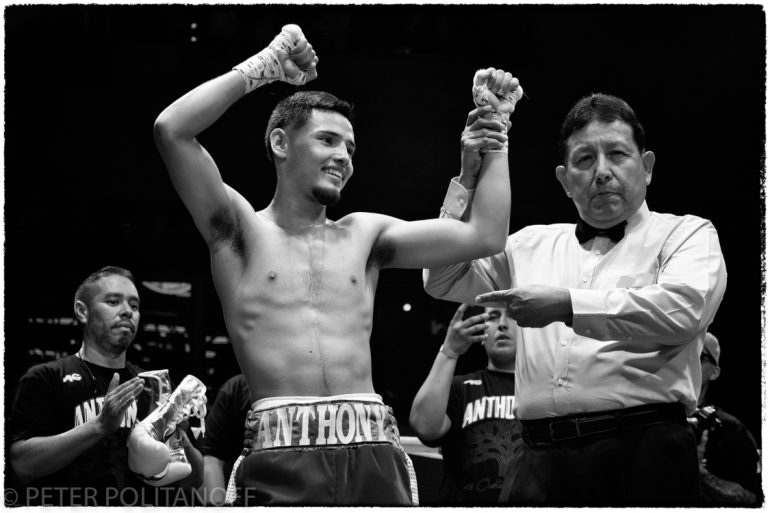 Anthony Garnica kicked off his professional career by putting Obed Fernandez to sleep in less than one round.

And just days after he picked up his fourth victory in as many bouts, Golden Boy Promotions came knocking on the door of the junior featherweight prospect.

Garnica was introduced to the sport at the age of seven, when his father took him to the gym for the first time.

“Believe it or not, my dream since I put on gloves for the first time was to be a Golden Boy fighter and it happened. I’m very excited.”

His first bout with the company, however, didn’t go exactly as planned. But he got the win nonetheless, netting a four-round majority decision over previously unbeaten Luis Alvarado, last February.

That said, Garnica explained why he deserves more credit for his performance.

“It was not ideal. He was already the naturally bigger guy, so he came out in the first round trying to bully me. It was tough but I pulled it off.”

What does that say about Garnica’s character? He essentially moved up two weight classes in just his fifth professional fight due to a situation that was completely out of his hands.

Garnica told The Ring that the risk was well worth it.

“I have confidence in my abilities,” he continued. “I’m the type of fighter that isn’t afraid of anybody.

“I don’t stand down. I take fighters apart. I’m more of a counterpuncher and I have a good jab.”

Garnica will fight on the undercard of a nine-bout Iron Boy Promotions card, on October 29, at WestWorld, in Scottsdale, Arizona, where he will battle fellow undefeated Travon Lawson (3-0, 2 KOs) in a scheduled four-round contest.

Garnica admits he knows next to nothing about his adversary but he’ll be in for a surprise in the ring.

“All I know about the guy is his name and that he’s 31 years old,” he stated.

Is it safe to say that Garnica isn’t a fan of watching tape?

“I’m not into that. I need to be focused on what I’m going to do in the ring, not what this guy may or may not do.”

When asked to provide a prediction for his upcoming fight, Garnica offered a coup d’œil into the action.

“You’ll have to wait and see,” Garnica said. “If I can win outside of my weight division, just imagine what I can do at my actual weight class.

“It’s going to be a good fight and you’re going to see me win in impressive fashion.”