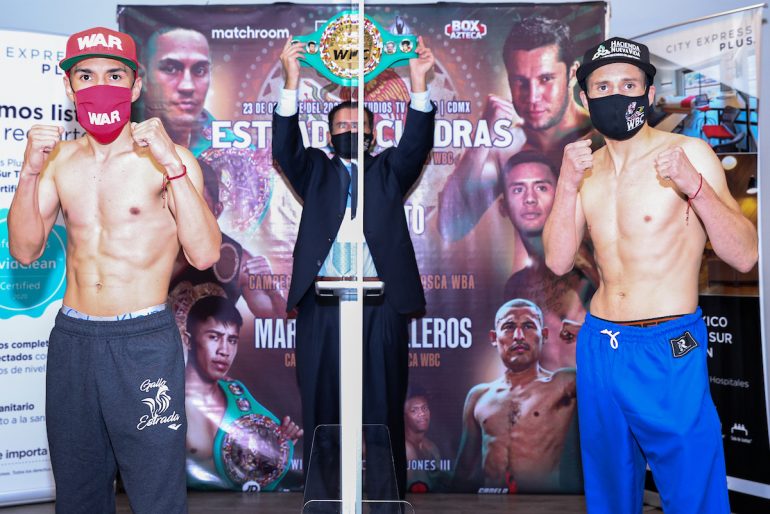 Juan Francisco Estrada and Carlos Cuadras pose after weighing in for their junior bantamweight championship fight. All photos by Ed Mulholland/Matchroom
22
Oct
by Ryan Songalia

The fight is a rematch of their 2017 fight in Carson, California, when a tenth round knockdown by Estrada was the difference in a one-point win on all three scorecards. The fight was threatened by a positive Covid-19 test for Cuadras, but a subsequent test, and negative tests for his entire team, showed the initial test to be a false positive. 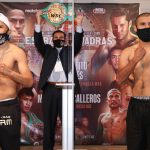 Julio Cesar Martinez and Moises Calleros pose after weighing in. 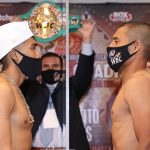 Julio Cesar Martinez and Moises Calleros pose after weighing in 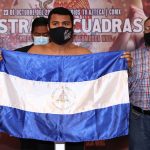 Roman Gonzalez shows the flag of his native Nicaragua 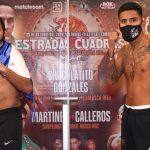 Roman Gonzalez and Israel Gonzalez pose after weighing in. 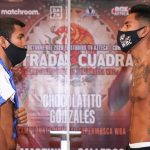 Roman Gonzalez and Israel Gonzalez pose after weighing in 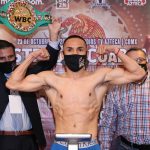 Juan Francisco Estrada weighs in for his rematch with Carlos Cuadras. 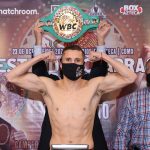 Cuadras steps on the scale for his second showdown with Estrada. 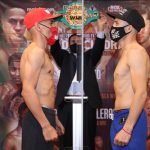 Juan Francisco Estrada and Carlos Cuadras pose after weighing in. 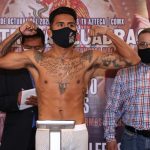 Israel Gonzalez steps on the scale to weigh in

The same was not the case for Maximino Flores, whose shot at WBC flyweight titleholder Julio Cesar Martinez (16-1, 12 KOs) was canceled due to a positive test. Martinez will instead face Moises Calleros (33-9-1, 17 KOs).

Yet, even after the WBC granted emergency sanctioning for the unranked Calleros, the Monterrey, Mexico native blew the 112-pound weight limit by several pounds, checking in at 117.4 pounds, while Martinez came in at 111 pounds. Calleros had accepted the fight on about a week’s notice.

A Matchroom Boxing source tells The Ring the fight will go on as a 12-round non-title fight.

Former pound-for-pound champion Roman “Chocolatito” Gonzalez weighed in the same as his opponent Israel Gonzalez – 114 pounds – for the first defense of the WBA junior bantamweight title that he won in February with a stoppage of Khalid Yafai in Frisco, Texas.

Gonzalez (49-2, 41 KOs) of Managua, Nicaragua has fought in Mexico six times before, but is making his first in-ring performance there since 2014. The mandatory challenger Gonzalez (25-3, 11 KOs) of Los Cabos, Mexico is challenging for a world title for the third time, having been stopped by Jerwin Ancajas in ten rounds in 2018, and losing a controversial decision to Yafai later that year.