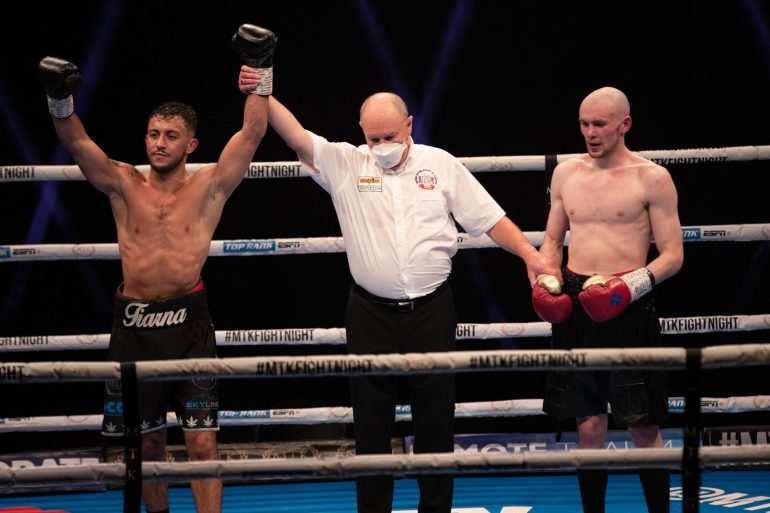 Michael McKinson outboxed Martin Harkin to win a 10-round unanimous decision at the Production Park Studios in Yorkshire, England.

The 26-year-old southpaw scored a scrappy first round knockdown and then dropped his off-balance opponent in the second and used his skills to build a sizable early thereafter.

McKinson (19-0, 2 knockouts) dropped Harkin for the third time in the fifth but to the Scottish fighter’s credit he charged back to land his own shots. However, Harkin (13-1, 5 KOs) was never able to make significant inroads into McKinson who controlled the fight. McKinson claimed a wide decision: 100-88, 99-88, 97-91.

“[Harkin’s] a dangerous guy, he’s an unbeaten fighter, that’s what I do for fun, take their 0’s,” McKinson said in a post-fight interview. “Granted he ain’t Chris Kongo, Josh Kelly but I believe I can compete with them guys and that’s who I want next.

“I’m beating these guys with ease; I just want the big names. These big names they don’t want to fight me but these are the one’s I’m hungry for. I believe I’m the best welterweight in the U.K., I just want to prove it. They can’t ignore me forever.”

Jay Harris got back to winning ways with a good 10-round unanimous decision over Marcel Braithwaite.

Harris, who gave a good account of himself in a losing effort against WBC flyweight titlist Julio Cesar Martinez in February, was the busier fighter throughout but was made to work for it in every round.

“It’s good to have a fight like that,” Harris said in the post-fight Interview. “I don’t think I boxed 100 percent [of my capabilities]. I was a bit sluggish, I got caught with a lot of over-hand rights which I shouldn’t have really got caught with. Credit to Marcel, he was as game as they come.

“It was a good shot [in the fourth round], I felt it, it buzzed me a bit, I worked through it and composed myself and got back in the next round.

“I had to move past Marcel but I’m looking to push for world title [fights]. I have to perform better than that to mix at world level.”