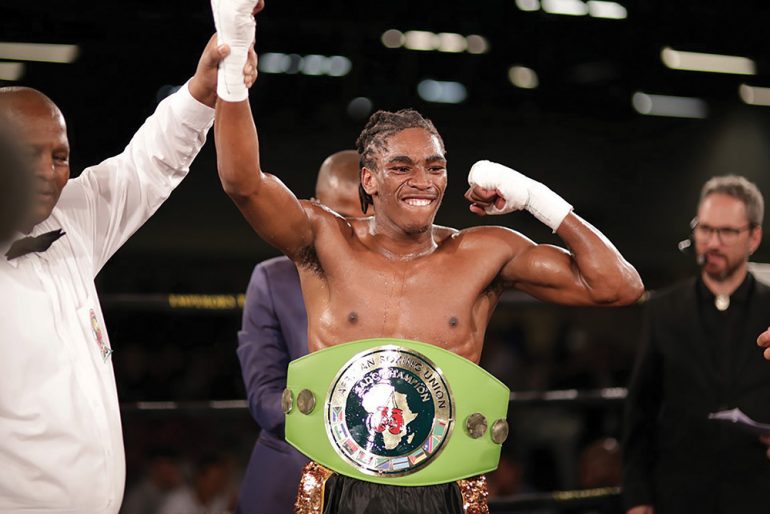 Topping the bill, welterweight Thulani Mbenge returned after more than a year’s absence, going the full ten round distance ni outboxing Kuvesa Katembo by scores of 100-91, 98-92 and 98-93 to capture the ABU title.

Mbenge started the fight by boxing well behind his solid jab.  His opponent, who hails from the Democratic Republic of the Congo, came alive in the second round, coming forward and throwing punches, but Mbenge timed him well with straight rights and uppercuts. Katembo continued to crowd Mbenge as the fight went on, landing two good uppercuts towards the end of the third.

Katembo was gutsy and tried hard but his punches couldn’t budge Mbenge who landed a big right hand followed by a double left hook that had Katembo hanging on in the fourth round. That set the pattern for the rest of the fight, with Mbenge boxing steadily behind a power jab and landing the harder punches, while Katembo responded with ineffectual flurries.

It was far from an impressive performance by Mbenge, who also holds wins over Diego Chaves and Miguel Vazquez, but he got the job done and got back in the win column after suffering his first loss, a close decision to Sebastian Formella in Germany that some thought should have gone his way.

In an absolute shocker, Xolisani Ndongeni, making his debut as a junior welterweight, was knocked out at the 1:48 mark of the sixth round by journeyman, Prince Dlomo. Ndongeni’s only loss had been a decision to current WBC lightweight champion, Devin Haney, in 2019. By comparison, his opponent entered the fight with a 11-10-1 record and many criticized the fact that the fight was even allowed to take place.

Ndongeni started off well, boxing behind an educated jab that he varied to the body and head, driving in a straight right at the end of the first round. What appeared to be a head butt in the second round opened a cut on the right eye of Ndongeni. The doctor being called onto the apron to examine him. Dlomo tried to rough up Ndongeni who took back command of the fight by landing left hooks to the body and head and nailing his opponent with a right.

The cut started bleeding in the third but Ndongeni landed some good body shots while Dlomo would land the odd right hand and left hook. Ndongeni had a good fifth, snapping Dlomo’s head back with a left hook. A straight right to the body, followed by another double left hook to the body and head sealed the round for Ndongeni.

Ndongeni seemed in control in the sixth, landing straight rights and uppercuts but then disaster struck. Just as he seemed to be dominating his opponent, Dlomo uncorked a left hook to the chin during one of their exchanges and Ndongeni landed flat on his back. How he made it back to his feet is anyone’s guess, but he didn’t have his legs under him and fell into the ropes where he was counted out by referee Eric Khoza.

HUGE upset and HUGE KO in Gauteng, South Africa🔥!Prince Diomo (12-10-1, 5 KO’s) with the brutal TKO-6 of Xolisani Ndongeni (26-2) in their lightweight contest pic.twitter.com/osNmsP1anR

Ndongeni drops to 26-2 with 14 knockouts and he has a hard road ahead of him if he wants to rebound from a stay busy bout that went horribly wrong.

In a contest scheduled for ten rounds, Khaya Busakwe, a protégé of Norman Hlabane who trained the likes of Dingaan Thobela and Lehlohonolo Ledwaba, served notice that he is one to watch when he scored a third round stoppage over Kabelo Bikitsha for the Gauteng lightweight belt.

The fight was contested at a fast pace, with both fighters having their moments but when Busakwe hurt Bikitsha with a straight right-left hook combination in the third the writing was on the wall. The follow up barrage had Bikitsha staggering into the ropes and referee, Simon Mokadi, waved it over at the 2:37 mark.

Busakwe improves to 6-1, all his victories coming via the short route, while Bikitsha drops to 4-3.

The card was presented by Joyce Kungwane of TLB Promotions.