Elvis Rodriguez highlights the Navarrete-Villa undercard with a knockout 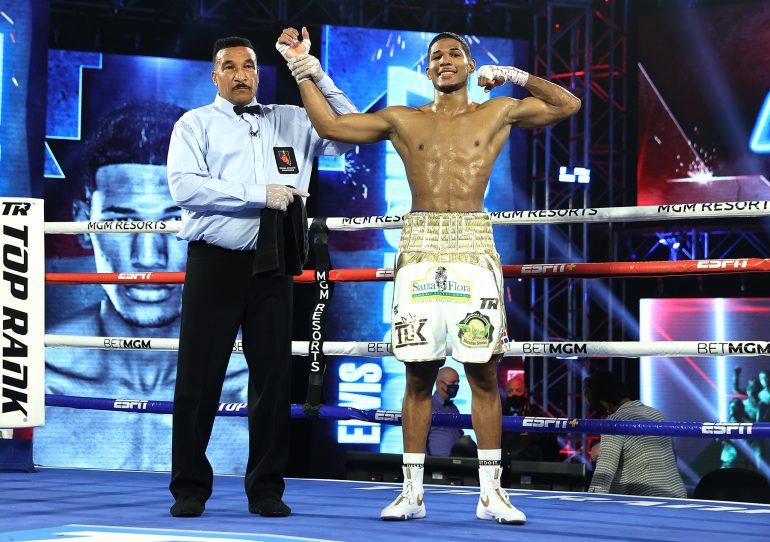 The arc Elvis Rodriguez continues to climb is promising. The 24-year-old junior welterweight from the Dominican Republic seems to like the precipitous ascent.

Although Cameron Krael carried a mediocre record, it did not mean the 26-year-old veteran was an easy out.

Rodriguez made it look easy, stopping Krael at :53 of the third round of the scheduled eight-rounder on the undercard of the Emanuel Navarrete-Ruben Villa featherweight title fight from the MGM Grand Conference Center in Las Vegas.

A sharp-looking 5-10½ southpaw, Rodriguez dropped Krael, who had only been previously stopped once six years ago (by Jamal James), with a right hook. Rodriguez (10-0-1, 10 knockouts) has won each of his fights within the distance. Krael (17-17-3, 4 KOs) lost for the fourth time in his last five fights.

Leading up to the finish, Rodriguez had hurt Krael with a right hook inside of a minute left in the second. Another vicious Rodriguez body shot had Krael backing up as the round was nearing an end.

“I feel very happy with this performance,” Rodriguez said. “This was my first eight-round fight, and things went way better than expected. I knew that I was facing a tough opponent who had only been stopped once, but I also knew that I had put all the hard work in the gym.

“My goal is to keep bringing up the flag of the Dominican Republic. That’s what I sacrifice for. I do it for my people. This was a big win, and there will be more to come.”

Judges Tim Cheatham and Max De Luca each had it 78-73 for Simpson, while judge Chris Migliore scored it 79-73 for the 20-year-old from Baltimore, Maryland. 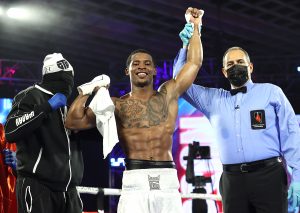 Lorenzo “Truck” Simpson survived a disputed knockdown to come away with an unanimous victory (Photo by Mikey Williams/Top Rank).

As the fifth round was winding down, Duversonne connected with a right hand that appeared to knock down Simpson. Truck argued with referee Mike Ortega that the knockdown was caused when his feet were tangled with Duversonne, forcing Simpson to use his right hand to keep him up.

It was the first knockdown of Simpson’s young pro career. 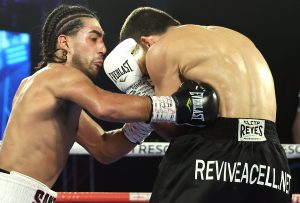 “I am grateful for that I had a great camp,” Elliott said.  “I was looking to go more rounds, but I will take it. Just being out there. I have been looking forward to this my entire my life.  I was poised, and now I am 1-0, and there will be a lot more to come. I knew that I was going to stop him. I wasn’t chasing it, but my punches have bad intentions.”