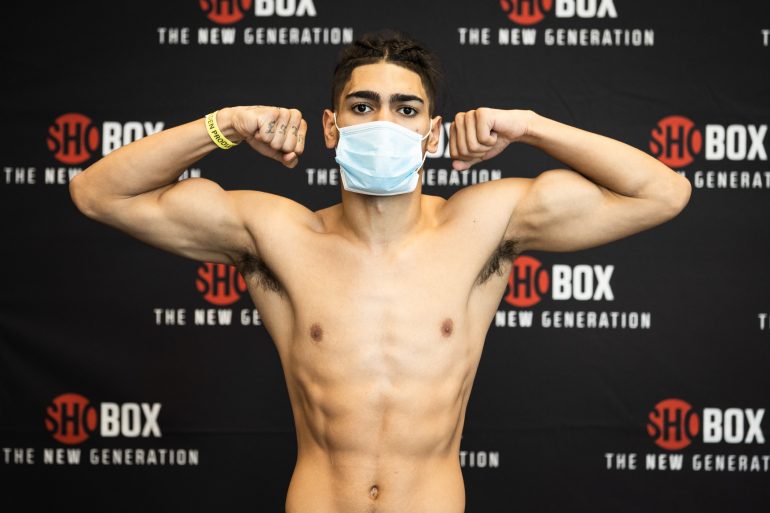 For Bocachica, it only makes sense he’d be a part of this card. Despite being less exposed than the two other “A-side” fighters on the card, Charles Conwell and Brandun Lee, Bocachica has wins over them in the amateurs.

“I’m excited though because there’s a lot of people that get more play than me on TV. They get put up there and praised so much like they’re so good and whatever but these people get dropped by me in sparring and they lose their matches with me,” said Bocachica (15-0, 10 knockouts), in a possible reference to Teofimo Lopez, whom Bocachica knocked down in a sparring video he had posted some time back.

🤯 Janelson Figueroa (14-0 welterweight) has posted a video of himself dropping Teofimo Lopez in sparring. Lopez's father says his son was only 15 at the time and has bitten back by uploading additional footage in which Figueroa hurls Lopez to the canvas out of frustration. pic.twitter.com/jVKq1v3t7W

“All through the amateurs I only fought good opponents and these guys are on TV when little does everybody know, these undefeated fighters were getting beat up by me. Now people finally get to see what’s up.”

The Detroit native hopes to give people something to talk about when he faces Nicklaus Flaz (9-1, 7 KOs) of Vega Alta, Puerto Rico in an eight round welterweight bout.

Growing up in Southwest Detroit, the 21-year-old Puerto Rican comes from a family where both sides are into horse racing. His dad’s side was tall and involved in horse training, while his mom’s side of the family is short and includes top jockeys Arnaldo Bocachica and Orlando Bocachica.

After picking up baseball, Bocachica became intrigued by boxing at age 8. From the early goings, it was a natural fight.

“My dad [and current trainer Nelson Figueroa] took me and he was like, ‘let’s see how it goes,’” remembers Bocachica. “I ended beating the shit out of all the little kids in the gym that was going around to tournaments.”

Among his amateur highlights include a 2012 National PAL Championship title and several other titles in the junior olympics ranks. 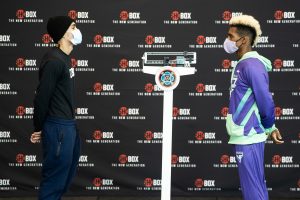 “I beat the shit out of Brandun Lee, then no one in California wanted to fight me,” says Bocachica. Is it awkward to see an amateur rival on the same card as himself? “I think it’s a blessing because hopefully I can get that [fight]. We can make money off that one.”

Aside from prestige, boxing brought the young Bocachica discipline, and helped keep him away from all the trouble that is easily found in his neighborhood, if one was interested in finding it.

Should Wednesday be Bocachica’s coming out party, it’ll come at the expense of the 24-year-old Flaz, whose only defeat was a decision loss to one-time top Uzbek amateur Hurshidbek Normatov. The matchup has generated lots of feedback, and some criticism, back home in Puerto Rico, as some questioned why Bocachica have to fight a fellow Puerto Rican. But he reminds people that it’s his management team that picks his opponents, he just fights them.

“He’s a brawler, so he says. He says he’s a brawler, but everybody says they’re this and they’re that until they hop in the ring,” said Bocachica. “If he wants to brawl he can get it, and it’ll be a short night for him, But I’m gonna do a lot of boxing in there, and I’m gonna do a lot of messing around in his head, because if you think you’re brawl with me, that’s the first mistake you’re making. If I punch you in your mouth, the game plan’s gonna change.”

Bocachica keeps that same energy when he looks even higher up the welterweight ranks, and hopes being seen by a national audience for the first time can earn him bigger opportunities down the line.

“I think some guys are overrated, I think I can take them out now,” said Bocachica. “Keith Thurman, I think he’s overrated, I have to say it. I don’t know how Keith Thurman got up there. I know he’s powerful and people don’t give him the credit for his movement, his movement is pretty good but his boxing? His boxing is not really what people make it out to be.

“I just hope with this fight, I get the eyes of these people. I hope I get the opportunity to get bigger fights and people won’t be scared like they were in the amateurs.”