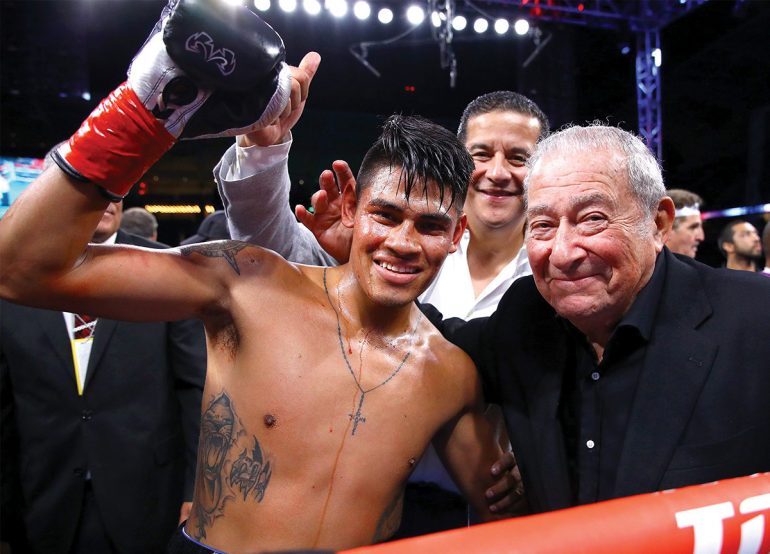 There is a burgeoning confidence about Emanuel Navarrete. You can’t really blame him. There should be.

Navarrete comes at opponents like a tsunami–with an attitude that says ‘Here I am, stop me.’ He is the former WBO junior featherweight titlist. He’s an action fighter who’s run through the 122-pound division.

The 25-year-old Navarrete (32-1, 1 NC, 28 knockouts) is on a 26-fight winning streak that dates back to 2012. He’s beaten Isaac Dogboe twice, once by stoppage that won him the WBO junior featherweight title. He’s stopped his last five opponents within the distance.

The last time Navarrete lost eight years ago Villa (18-0, 5 KOs) was a 15-year-old amateur who was showing signs he could be a quality pro.

So, who is carrying more pressure to win?

“I think the pressure is on both of us, because I’m coming from 122 pounds and won the division and that’s not easy to do, but I made it look easy,” the 5-foot-7 Navarrete said. “(Villa) is facing that type of fighter that basically ran through that division, but Villa is a boxer who has a lot to prove. I really don’t know if he’s going to be the bigger guy entering the fight, because I am a tall featherweight.

Navarrete, from San Juan Zitlaltepec, Mexico, promised that he will have a belt at 126 pounds. He said he won’t change his tactics. He plans on being the same advancing, in-your-face fighter he was in his previous 34 fights.

“I want to run through my opponent and look for a knockout, which isn’t really anything new for me,” Navarrete said. “I’m always looking for the knockout, and always look to entertain fans with exciting fights.”

Navarrete admitted he doesn’t know much about the 23-year-old Villa, other his distinguished amateur career. Navarrete fights with an aggressive style that screams ‘I’m coming to knock you out!’

But will Villa be there for him to hit?

“I have no worries in facing (Villa),” Navarrete said. “Everyone knows Villa is a fast fighter, but everyone also knows that I’m a ferocious fighter. Everyone knows I’m always pushing forward, and whatever he brings, I’m going to be ready for.

“But I don’t think I have much on him when it comes to experience. We balance each other out pretty well there. He has a great amateur career, but I really believe I have the advantage when it comes to power and how ferocious I can be in the ring.”

As for the size difference, considering Navarrete is moving up, Villa is 5-foot-6, with a 66½”-inch reach, which is an inch shorter than the 5-7 Navarrete and almost six inches in difference in reach (Navarrete has a 72”-inch reach).

But Villa is the natural featherweight.

“Size isn’t going to make a difference,” Navarrete said. “It was getting difficult for me making 122. It was getting tougher and tougher. I was taking a toll on my body, but I wanted to get the big fights at 122.

“After I went through the division and no one wanted to face me, I wanted to make the move to 126 and here we are.”