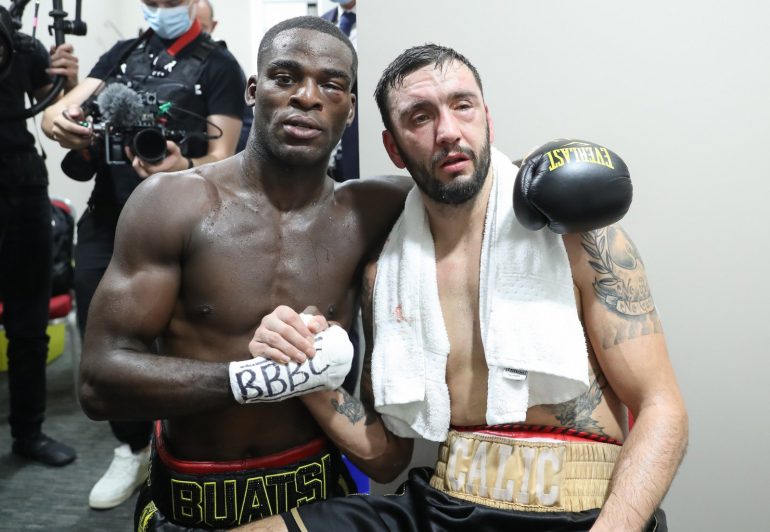 Joshua Buatsi got past the first gut check of his professional career vs Marko Calic. Photo / @MatchroomBoxing
04
Oct
by Anson Wainwright

Buatsi 13-0 (11 knockouts) overcame some testing moments, notably in the third round when he was backed up by a right hand and forced to cover up along the ropes. The shots left the 27-year-old Londoner marked up under the left eye.

To his credit, Buatsi took the challenge and rebounded with a solid fourth round and continued to build on his momentum, hurting the 33-year-old late in the fifth round.

Over the next two rounds Buatsi slowly broke down Calic (11-1, 6 KOs) until he landed a big right hand midway through the seventh round that hurt his rival. The 2016 Olympic bronze medalist jumped on Calic and floored him soon afterwards with a relentless combination.

Calic found his way to his feet and was allowed to continue but his corner quickly intervened with their man looking weary and spent at 2:09 of the seventh round.

It was the most difficult night of Buatsi’s professional career but ultimately, Ghana native showed his pedigree to fire back and overcome some adversity.

“Props to Calic, he told me his jaw was broken,” Buatsi told Sky Sports shortly after the fight. “I had to dig deep. I got a thump [in the eye] in the third round, but we bite down and fight.

“He was tough, he was competitive each round. 400 days out of the ring, first one back is quite different, but I enjoyed it. I’m excited and happy to have got the win. If this [the eye injury] goes down, I’ll be more than happy to fight in December.” 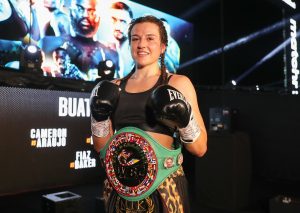 Cameron (13-0, 7 KOs), The Ring’s No. 5-rated junior welterweight, used her skills and impressive movement to bamboozle the Brazilian who won bronze at the 2012 Olympics. Cameron posted a shutout unanimous decision on the scorecards (three tallies of 100-90). Araujo, who weighed in nearly six-pounds over the 140-pound division limit drops to 6-1 (1 KO).

“I can’t put it into words, it’s emotional,” Cameron said. “I wanted this belt and just had to keep my head on it. She wasn’t professional enough to make the weight. I knew I would get the win, I just had to take it in my stride.

“I could feel the weight difference, she was really heavy, her punches were carrying a bit of meat.

“It means the world to me and I can’t wait to come back to Northampton. I want all the belts.”

Rising heavyweight hopeful Alen Babic (5-0, 5 KOs) stopped the more experienced Niall Kennedy (13-2-1, 8 KOs) in three rounds. The aggressive Croatian dropped Kennedy and quickly jumped on him to impressively finish him at 0:34 of the third round.

Super middleweight ​John Hedges successfully turned professional with a four-round decision against Jan Andon (2-5). Referee Ian John Lewis was the sole scorer of the fight and turned in a scorecard of 39-37.