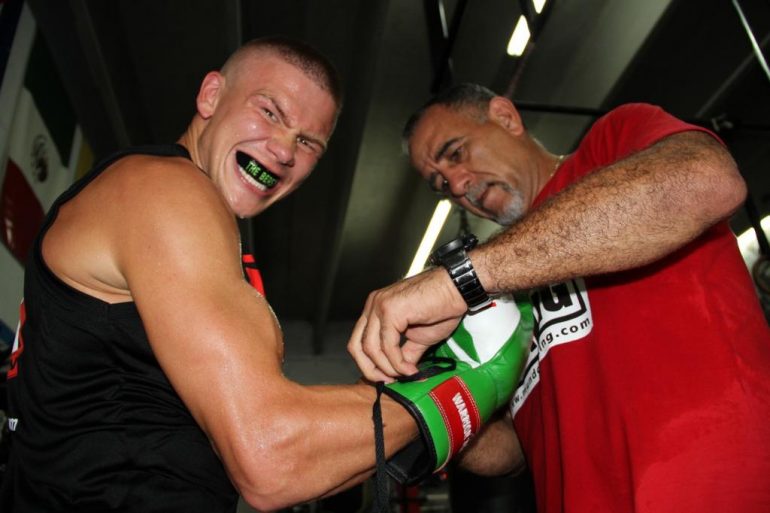 Now fit to fight, Baranchyk is ready to resume hostilities in an eagerly anticipated crossroads matchup that will have significant ramifications for the talent-laden division and position the winner closer to world title opportunity.

“It is a tough fight,” Baranchyk (20-1, 13 knockouts) told The Ring through co-promoter Max Alperovich of Fight Promotions from his Miami training base prior to leaving for Las Vegas. “He’s not an easy opponent, but I am ready to fight with anybody.

“It’s not 50-50, I am very confident. I will break him (laughs) towards the middle of the fight with pressure.

“After this fight, I hope to face [WBC and WBO titleholder Jose] Ramirez for the world title.”

The stocky 27-year-old pressure fighter has had a good training camp with Pedro Diaz and feels that the acclaimed trainer has helped him improve.

“He’s the best coach I have trained with and I like his style,” said Baranchyk. “We spend a lot of time on technique and strategy, something I think I needed to improve on, and the Cuban school of boxing helps a lot.”

Alperovich, who first spotted Baranchyk in the amateurs, feels his fighter has grown from the loss to The Ring Magazine, WBA and IBF titleholder Josh Taylor last May.

“He has settled down to a point where he knows exactly how to strategize the fight,” said the promoter. “I think he’s finally learned how to be patient instead of coming in trying to take somebody’s head off. Unfortunately, it took a loss to realize that.

“Zepeda is dangerous, but we’ve prepared very well. I think we’re going to see a new Ivan this time. Ivan is going to make a big statement and it’s going to be the beginning of a new journey for him. I think the time has come where he’s gonna go forward and win every fight and not stop until he gets the world title.”

Zepeda (31-2, 25 KOs) turned professional in 2009. The Mexican-American sharpshooter won his first 23 fights before suffering a dislocated left shoulder against Terry Flanagan in a bout for the vacant WBO lightweight title. Flanagan was awarded a second-round TKO victory.

After recovering, Zepeda worked his way toward a WBC 140-pound title shot against Ramirez. He gave a strong account of himself but dropped a close decision. The 31-year-old rebounded strongly with a hard-fought win over former two-weight world titleholder Jose Pedraza and most recently Kendo Castaneda.

The Baranchyk-Zepeda bout will be televised on ESPN+