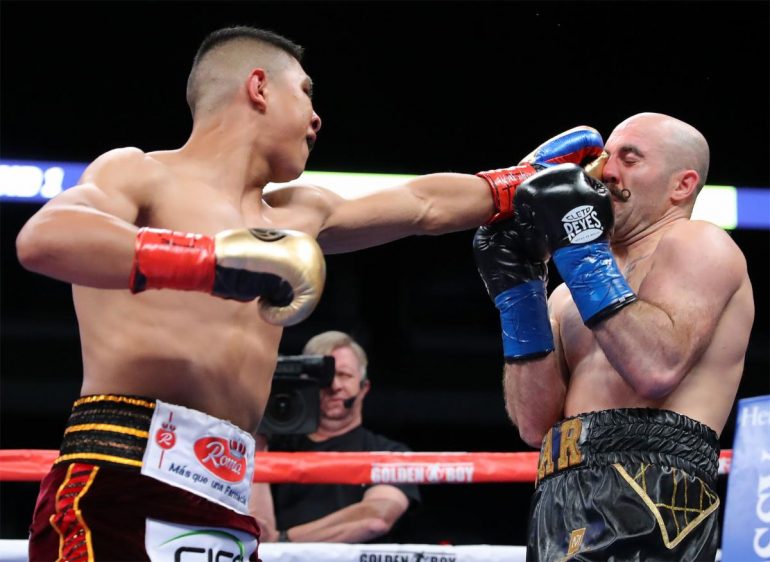 The 12-round bout will take place at the Fantasy Springs Resort Casino in Indio, California and will stream live on DAZN.

Munguia (35-0, 28 knockouts), who resides in Tijuana, last fought on January 11 in San Antonio, Texas, when he stopped Gary “Spike” O’Sullivan in Round 11. The victory over O’Sullivan was Munguia’s first as a middleweight after having successfully defending the WBO junior middleweight title five times over two years.

The 23-year-old is likely to face a stern test from Johnson (21-2, 15 KOs), a 2008 Olympian who represented the Bahamas. Johnson has not fought since July 18 of last year, when he stopped Jason Quigley in nine rounds. The win over Quigley took place over five months after Johnson fought to a draw against journeyman Fernando Castaneda of Mexico.

Despite Johnson suffering knockout losses to Sergey Derevyanchenko and Curtis Stevens, Oscar De La Hoya believes the fringe contender will bring the best out of Munguia.

“Jaime Munguia has all the qualities to become Mexico’s biggest boxing superstar,” said De La Hoya, who is the Chairman and CEO of Golden Boy. “He’s tough, charismatic, and has the physique to win world titles at both middleweight and super middleweight after a successful reign at 154 pounds.

“However, Tureano Johnson is coming off an impressive knockout win against Jason Quigley in which he handed him his first loss, something he definitely wants to do against Munguia as well. This is a veritable crossroads fight, and the winner will cement his case for a world title opportunity and be a threat to any of the champions.”

The 23-year-old Munguia has recently worked with former world champion Erik Morales, who also resides in Tijuana. Despite the ongoing COVID-19 pandemic, Munguia has been anxious to get back in the ring.

“It’s a great honor to be returning during these tough times,” said Munguia, who is co-promoted by Zanfer Promotions. “I hope to deliver excitement and entertainment to the fans as the world begins to slowly make its return to normalcy. At the same time, I have been training and improving my skills with my team at the Ceremonial Center in (the) Otomi (Mountains in Mexico), and I will show everyone that Jaime Munguia is ready for the best in the division.”

Between the losses to Stevens, in April 2014, and Derevyanchenko, in August 2017, the 36-year-old Johnson won six fights in a row against modest opposition. He believes he can pull off the upset win and put himself in line for an even bigger fight in 2021.

“I am excited about the opportunity to fight Jaime Munguia,” said Johnson. “The setbacks I have had in my career have only made me stronger. Munguia is a tough undefeated fighter, but I will hand him his first defeat as I pursue my quest to be the middleweight champion of the world.”