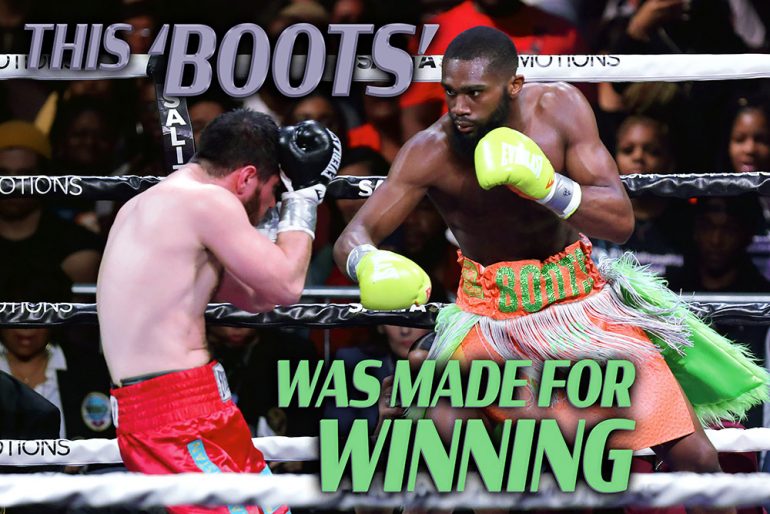 Who wins between Jaron Ennis and Jamal James at this point? – Kevin Key, Duluth, MN 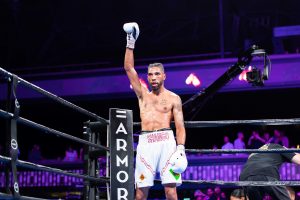 James also presents challenges with his height (he’s 6-foot-2), durability (he’s never been stopped), and high workrate. However, despite his youth and (comparatively) lesser pro competition, Ennis appears ready for the likes of James and world-class welterweights rated in The Ring’s top 10. 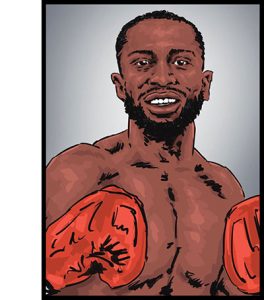 Jaron Ennis. One of the “Honor Roll” up-and-comers featured on the April 2020 cover of The Ring. Art by KronkAAArt

As busy and furious as James can be on the inside, he simply can’t match the speed, power or precision that Ennis regularly displays (vs. admittedly lesser accomplished welterweights). If Dulorme was able to put hands on James’ head and body, I have to image that Boots would tee-off with his blazing combinations. Shango’s best bet would be to employ a disciplined stick-and-move game, however it should be noted that while Ennis is four inches shorter, his wingspan is four inches longer than the Minnesota beanpole. He might be able to walk James down with his quicker jab if he’s able to cut the ring off (and I think he can).

I’d favor Ennis by unanimous decision and I think James, who holds the WBA’s interim belt, is a good target for him. A victory would garner Ennis a high ranking by the WBA, which would get him closer to a showdown with Vergil Ortiz Jr., who holds the sanctioning body’s “gold” title.

I believe an eventual showdown between Ortiz and Ennis could be this generation’s Chavez-Taylor.

Considering the lack of activity for months, and fight schedule reduction for the near future caused by the Covid-19 pandemic, which fighter’s career worries you most?

Do you think we could have lost the opportunity to see something close to peak version of certain fighters? I am thinking of people like GGG or even Usyk, that maybe up to longer inactivity than usual, which maybe particularly damaging at these point of their careers. – Jon 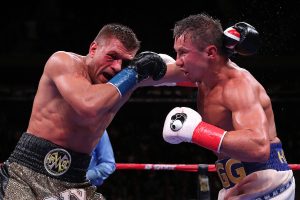 In Golovkin’s case, I don’t think the pandemic is preventing us from seeing “something close to his peak version” because I believe the former unified middleweight champ peaked in 2014-2015. The 38-year-old hero of Kazakhstan is what he is now, a fading-but-still dangerous veteran. The time away from the ring in 2020 due to COVID-19 restrictions could even be a blessing in disguise given the grueling nature of his last bout, the 12-round Fight of the Year candidate with Sergei Derevyanchenko.

The same could be said about Aleksandr Usyk, who has been hampered with injuries following his banner 2018, which ended with him as the undisputed cruiserweight champ and the consensus choice for Fighter of the Year. A right biceps injury delayed his anticipated pro heavyweight debut until October of last year, and his pedestrian stoppage of Chazz Witherspoon was his only bout of 2019. A left elbow injury (suffered before his Ring Magazine cruiserweight title-winning victory over Murat Gassiev in 2018) was re-aggravated this year, which has pushed his showdown with Dereck Chisora back. So, maybe the corona-cleared boxing schedule from March to August was a good thing for some of these veterans who needed time to mend. 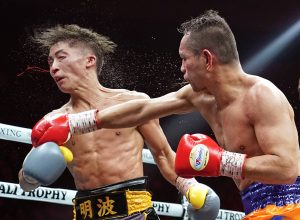 Inoue absorbed his share of punishment vs. Donaire. Photo by Naoki fukuda

The same goes for young pound-for-pound studs like Naoya Inoue and Errol Spence Jr. Inoue was scheduled to return in April, vs. John Riel Casimero, but maybe postponing his Las Vegas debut to October 31 (Vs. Jason Moloney) was a blessing given the severe facial injuries the Ring Magazine bantamweight champ sustained during the 2019 Fight of the Year with Nonito Donaire (which included fractures to his right eye socket and nose). Earlier in the year, Spence was talking about returning to the ring in September or October, but there’s no doubt that the IBF/WBC welterweight titleholder needed extra time off to completely recover from his sports car crash last October (especially since he’s coming back against a real foe, Danny Garcia on November 21, and not a journeyman or mid-level fighter).

The only elite-level boxers in their primes who are missing out this year are Canelo Alvarez, Terence Crawford and Juan Francisco Estrada, but the sad truth is that the Mexican star may not have fought in 2020 anyway due to his legal issues with DAZN/GBP, and Bud remains isolated from the other welterweight titleholders due to his promotional/network affiliation. Thankfully, it looks like Estrada, the Ring Magazine junior bantamweight champ who had a bout with COVID-19 in July, will return to action vs. familiar foe Carlos Cuadras in Mexico City in late October.

The fighters who are really impacted by the pandemic are the high-level prospects that are almost ready to graduate to world-class status, like Boots Ennis and Vergil Ortiz Jr. Had COVID-19 not crashed the party both welterweight up-and-comers may have fought three-to-four times this year, and could have been knocking at the door of a mandatory title shot going into 2021. As it is, Boots is lucky to have fought twice, so far. Ortiz, the 2019 Prospect of the Year, is fortunate to have gotten one fight in this year. We’ll see if either can get another bout in before the end of the year.

PATTERSON VS. THE LIGHT HEAVYWEIGHTS

Today is the anniversary of Ali vs Patterson rematch. Somehow, I always feel that people tend to underrate him.

Any update on Canelo? Do you think that GBP and DAZN will be able to come to a settlement? Regards. – Saurabh

I hope they can come to an out-of-court settlement. Nobody but the lawyers “win” a lawsuit.

I’m not sure what you’re asking me in regard to Floyd Patterson’s mythical matchups with the former light heavyweight champs, Saurabh. Are you asking me who would win if those 175-pound champs faced the heavyweight champ version of Patterson (who weighed between 182-188 pounds)?

If that’s the case I think he would stop Foster, Jones and Saad Muhammad; outpoint Ward and Qawi, but still lose to Charles (by late stoppage) and Spinks (via decision).

If you’re asking me how a 175-pound Patterson with the form and maturity of the heavyweight champ version would fare against your selection of light heavyweight champs, I think they would all beat him in competitive fights (perhaps a couple of shootout thrillers). Charles and Foster would stop him by the mid-to-late rounds; Spinks, Jones, Ward, Saad Muhammad and Qawi would outpoint him.

Quick question: What happened to the cross-armed defense? I see it all the time when I watch the old fighters on Youtube but I never see contemporary boxers use it. George Foreman employed it and Holyfield but that is already some time ago, isn’t it?

Is it just that I don’t watch enough modern boxers or has that form of defense died out? If so, how come?

Anyway, thanks for the mailbag! And best of luck and lots of love to the U.S. in these troubled times! – Hans from Hamburg

Thanks for the kind words, Hans.

I wouldn’t say that the “cross-armed” defense has completely died out, but it’s not practiced by top-tier fighters on a regular basis any more, and it hasn’t been a common form of boxing defense since the 1950s. 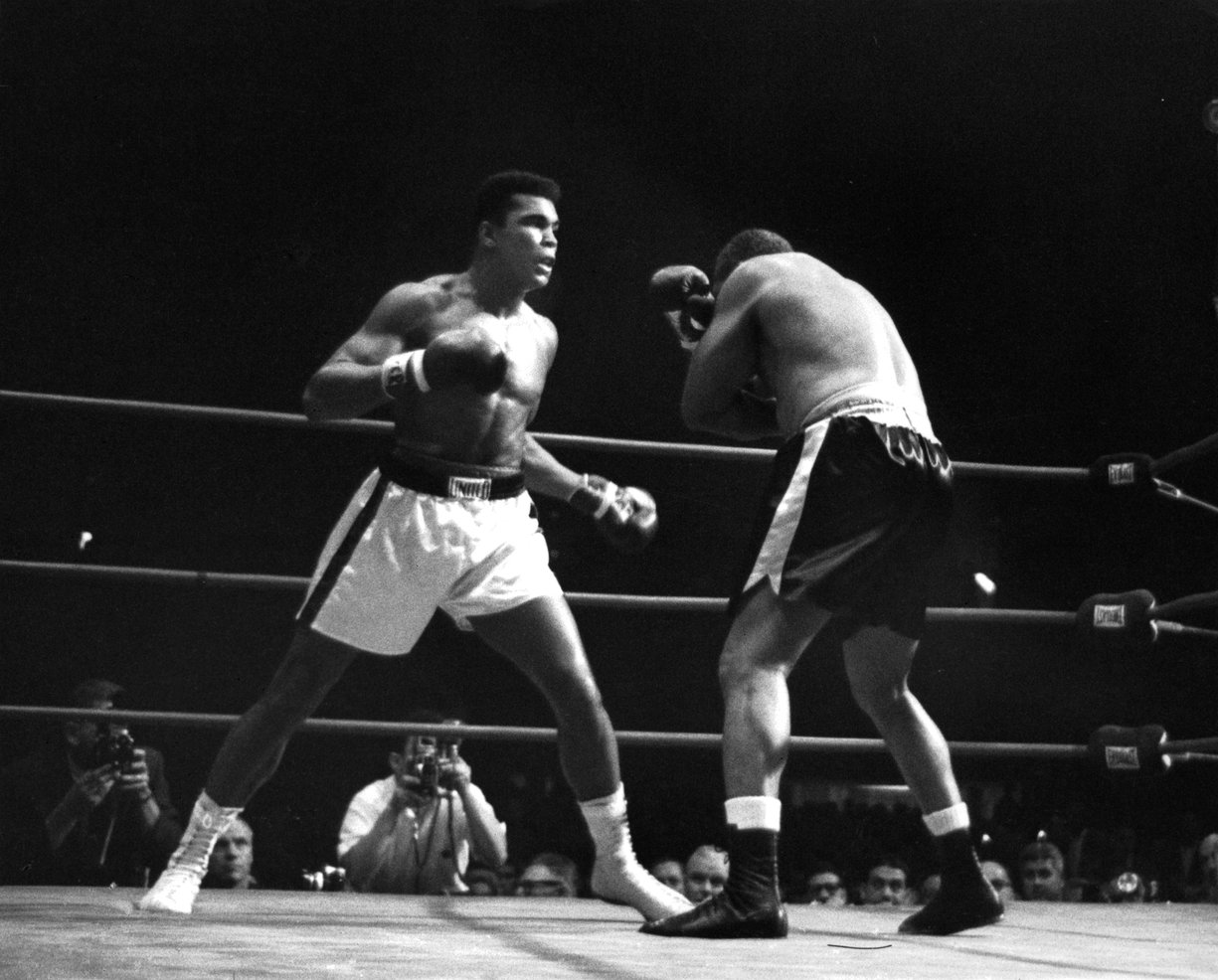 The 49-year-old Moore’s cross-arm defense was not much use against young Cassius Clay. Photo by THE RING

The great Archie Moore was the most respected and recognized practitioners of the cross-armed defense, but even in the ’50s the “the Old Mongoose” was a throwback fighter, having turned pro in the mid-1930s. Foreman mastered the cross-armed defense during his comeback in the late 1980s/early ’90s when he brought Moore in as one of his trainers and cornermen. He learned a lot “old-time” techniques and methods from Moore, just as Holyfield learned throwback tactics from his old-school trainers – George Benton, a crafty former middleweight contender who fought during the ’50s and ’60s, and Lou Duva, who learned the finer points of training by hanging around (and serving as an assistant) the best New York City trainers of the 1940s and ’50s. Duva was also a good friend of Rocky Marciano, who sometimes employed the cross-arm defense while he walked his opponents down. One of the early champions of Duva’s promotional stable was junior lightweight Rocky Lockridge, who had his own version of the defense technique.

Ken Norton adopted it when he changed trainers from Eddie Futch to Bill Slayton. If you watch his 1976 rubbermatch vs. Muhammad Ali and his epic 1978 showdown with Larry Holmes, you’ll see Norton’s version of the cross-arm defense. It wasn’t like Moore’s or Forrman’s, they stacked their forearms in an almost horizontal/parallel formation. Norton held his forearms at a diagonal angle, with his left glove down by right rib cage and his right glove up by the left side of his jaw. The right hand was in position to block and parry incoming punches, while the left was sporadically fired from his chest in the form of a quick and sneaky jab.

I don’t think it’s a secret or mystery why the cross-arm defense is no longer prevalent in boxing. A) there weren’t many boxers-turned-trainers to begin with who used it during their fighting days and were willing to pass it on to a new generation; and B) it’s a risky and potentially painful form of defense. The fighters that excelled at it were usually durable, physically strong stalkers with heavy hands. Most human beings lack the beefed-out-Popeye forearms that Moore and Foreman wielded in the ring. Hey man, trust me, it hurts to get hit on your forearms.