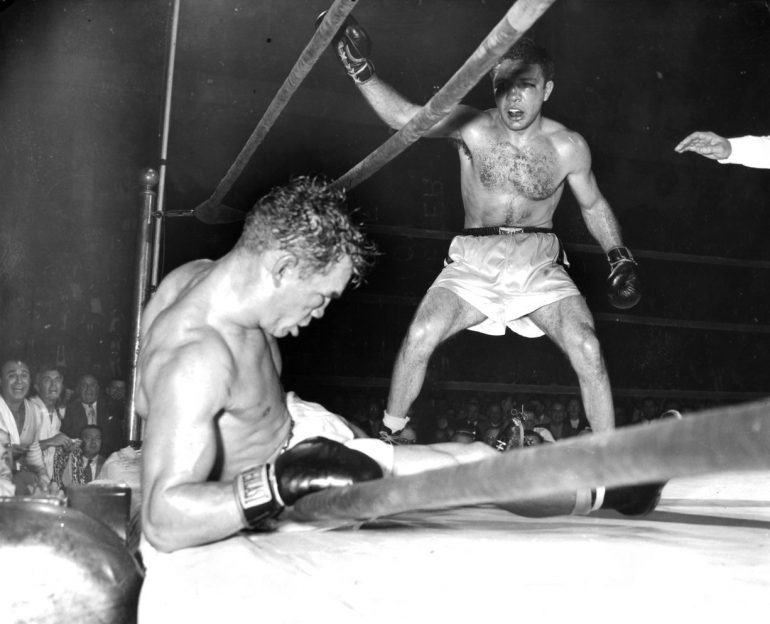 Jake LaMotta (right) knocked out Laurent Dauthuille in the final seconds of Round 15. Photo by The Ring/ Getty Images
13
Sep
by Bernard Fernandez

The term “Hail Mary” has become a familiar part of the lexicon of sport, dating back to the 1920s but most widely associated with Dallas Cowboys quarterback Roger Staubach, who came to be known as “Captain Comeback” for his penchant for leading fourth-quarter rallies occasionally capped by long, low-probability touchdown passes to win games with time running out. The most celebrated of the miraculous endings authored by Staubach came in an NFC Divisional playoff game on December 28, 1975, against the Vikings on a muddy field in frigid Bloomington, Minnesota.

In describing his desperation, 50-yard scoring heave to Drew Pearson with just 23 seconds remaining, which erased a 10-7 Vikings lead and gave the Cowboys a 14-10 upset victory, devout Catholic Staubach said, “I closed my eyes and said a Hail Mary.”

Such bolts from the blue can and sometimes do happen in other sports, but even Staubach was incapable of throwing a 22-point touchdown pass on the final play if his team was behind by three touchdowns. For such a prayer to be answered in football, the trailing squad has to be close enough to not only close the gap, but overcome it with a bold, single stroke. 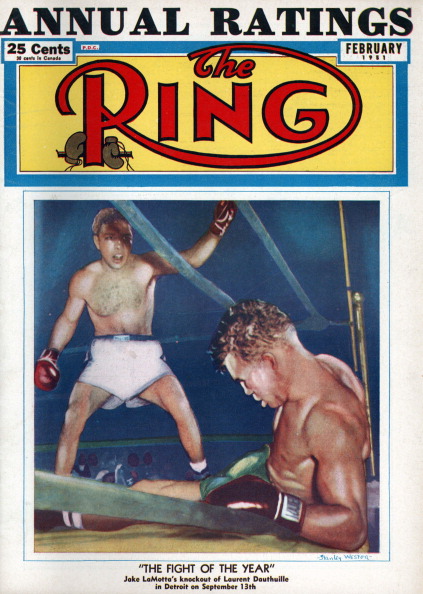 The February 1951 cover of Ring Magazine featured an illustration of the dramatic climax of the Jake LaMotta-Laurent Dauthuille middleweight championship, which was The Ring’s 1950 fight of the Year. (Photo by: The Ring Magazine via Getty Images)

No one could ever confuse legendary former middleweight champion Jake LaMotta, a rough-hewn, warts-and-all customer if there ever was one, with a Goody Two Shoes such as Staubach, but the “Bronx Bull” demonstrated that he did indeed have a prayer as the closing seconds ticked off in the 15th and final round of his second title defense, in a rematch with France’s Laurent Dauthuille on September 13, 1950, in Detroit’s Olympia Stadium, the 70th anniversary of which was on Sunday, September 13.

Too far behind on points to win on the scorecards, LaMotta offered up an entire Rosary’s worth of Hail Marys in a span of mere seconds when he convinced Dauthuille into thinking he was hurt, in trouble and on the verge of being knocked out himself. The challenger, who foolishly had elected to go hard at LaMotta when the prudent strategy would have been to sit on his presumed lead and play keep-away, was met with a barrage of blows from the possum-playing Bull. Dauthuille, whose nickname was “The Tarzan of Buzenval,” went down along the ropes and was struggling to rise when he was counted out by referee Lew Handler. The official elapsed time was 2:47.

Although the score-by-rounds cards submitted by Handler (8-6) and judges Joe Lenahan (6-4-4) and Jack Aspery (7-6-1), all for Dauthuille, indicated the action had been reasonably close, BoxRec.com lists wide points advantages of 74-66, 72-68 and 71-69 for the Frenchman, and the account of the fight in The Ring – which would later name it Fight of the Year – read that “all Dauthuille required when the bell sounded for the final round was to play safe, and had he boxed he would have come through triumphantly.”

Although nobody, with either camp or with the media at that time, apparently used the term “Hail Mary” to describe the way LaMotta-Dauthuille II ended, the term had become so popularized by Staubach that there were at least some mentions of it after Julio Cesar Chavez’s 12th-round TKO over Meldrick Taylor with a mere two ticks remaining in their welterweight unification showdown of March 17, 1990, and Mike Weaver’s 15th-round knockout of WBA heavyweight champ John Tate at the 2:15 mark on March 31, 1980. There have been other instances of all-but-assured defeats being reversed by late knockouts for fighters far behind on  the scorecards, but for a “Hail Mary” to be fully authenticated such a conclusion should be accompanied by an exclamation point not only in the final round, but preferably in the final scheduled minute. 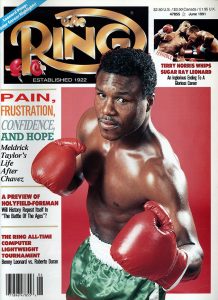 Meldrick Taylor wasn’t done after the Chavez loss. He lifted the WBA welterweight title from an undefeated Aaron Davis in January 1991. However, he would never again display the elite-boxing form he previously exhibited.

The ramifications of such radical 180-degree momentum shifts, for both the winner and the loser, cannot be overstated. Dauthuille, who had previously registered a 10-round, unanimous decision over a yet-uncrowned LaMotta in Montreal on February 21, 1949, never got another shot at the title he had come so tantalizingly close to winning; Taylor, although he did rebound to capture the WBA welterweight championship, was never the same fighter after his epic first showdown with Chavez (which was named The Ring’s Fight of the Year), and it can be argued that his spirit was forever damaged by the controversial outcome as well as the heavy toll exacted on his body; and Tate, who was already pegged for a multimillion-dollar defense against Muhammad Ali had he won as he appeared en route to doing, was knocked out in his next fight by Trevor Berbick, and, dejected, he ballooned to over 400 pounds, became addicted to cocaine and spent time in jail before dying at the too-young age of 43 when he suffered a massive stroke while driving, precipitating his fatal, one-car crash.

In recalling the stunning defeat against Weaver which began his downward spiral, Tate said, “Everywhere I went, it tormented me the way I lost to him.”

So how did the winners reap the rewards of their “Hail Mary” victories? Well, maybe not so much for the spectacularly muscled Weaver, who, although he followed the upset of Tate with victorious defenses against Gerrie Coetzee and James “Quick” Tillis, was then starched in one round by Michael Dokes and is now regarded as a good but hardly great fighter, little more than a place-holding alphabet titlist. But Chavez’s incredible escape, which boosted his record to 69-0 with 56 KOs, is a cornerstone of “JC Superstar’s” legend, and LaMotta’s closing magic against Dauthuille is a featured component of Raging Bull, the justly celebrated cinematic biography of his turbulent life and career. The movie, with Oscar-winning Robert De Niro as LaMotta, likely would have been made in any case, but its dramatic impact resonated more because of the scenes depicting him pulling a rabbit out of his hat against the rugged Frenchman.

There is much about LaMotta, who was 95 when he passed away on September 19, 2017, that had to be included in director Martin Scorsese’s film, not the least of which was his six-fight series with the great Sugar Ray Robinson. But upon further reflection it is obvious that Jake’s rematch with Dauthuille, if not worthy of its own movie treatment, at least could qualify as an ESPN “30 for 30” or like documentary.

Although he customarily had difficult paring down to the middleweight limit of 160 pounds, LaMotta – who once estimated that he had gained and lost 4,000 pounds during the course of his boxing life, which might be only a slight exaggeration — came in for the Dauthuille do-over at a taut 159½  pounds, arguably his best fighting shape in some time. It was with undisguised pleasure that LaMotta chided Dauthuille for coming in a half-pound over, requiring him to shadow box for 20 minutes in the corridor of the hotel where the weigh-in was conducted before he made 160 on the nose. 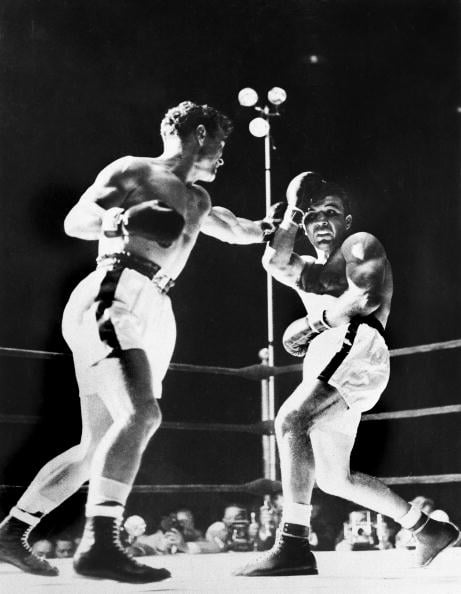 Lamotta blocks a hook from Dauthuille at his “lucky” venue and city, Olympia Stadium in Detroit. (Photo by Keystone-France/Gamma-Keystone via Getty Images)

“Let him break his neck and get that weight off,” LaMotta said of a task the other guy had to do for once. “Boy, what would they do to me if I had come in over the limit?”

The Dauthuille rematch was of particular significance to LaMotta, and not just because of his previous loss to the Gallic Tarzan. It would be his 17th ring appearance in Detroit, which the New York City native called his “lucky city,” having previously gone 15-1 with seven KOs there, including his title-winning turn against another Frenchman, the great Marcel Cerdan, via ninth-round stoppage on June 16, 1949, in Briggs Stadium. Not only that, but LaMotta’s only win in six tries against Robinson also came in Detroit, a 10-round UD on February 26, 1943, in Olympia Stadium.

Since his conquest of Cerdan, LaMotta had gone 4-1, including a 15-round points defense over Tiberio Mitri, and as the reigning champion on comparatively home turf he went off as an 11-5 wagering choice. But Jake’s typical pre-fight swagger might have been misplaced, and his ultimate salvation denied had not there been a miscommunication between Dauthuille and his corner team prior to the decisive 15th round.

Dauthuille had arrived with his French manager, Andre Barraut, with American Hymie Balustein serving as his trainer. With Dauthuille seemingly only three minutes from victory, the fact that he did not speak English, nor Blaustein French, became an issue as Blaustein tried to convey what he wanted done by his fighter with non-verbal gesticulations. To Dauthuille, it seemed as if his trainer was advising him to go right at LaMotta instead of adopting evasive tactics.

Twice before, in rounds 12 and 13, LaMotta had feigned grogginess to try to lure Dauthuille in, but on both occasions the challenger, correctly believing himself to be ahead on points, failed to bite on the charade. But, perhaps believing that LaMotta – who said that from the fourth round on he had fought with an injured right hand – really was on the hook and ready to go, he again ventured into the danger zone with under a half-minute remaining in the 15th. Then again, it might not have been an entirely reckless miscalculation by the challenger; he was there in no small part because of LaMotta, who apparently realized he could no longer wait on Dauthuille to be compliant to his wishes. 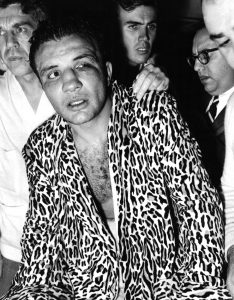 LaMotta after his “Hail Mary” effort vs. Dauthuille. Photo from The Ring archives.

After he had taken Dauthuille out, LaMotta, not surprisingly given his unwavering belief that somehow, some way, he would always prevail, said he had been patiently expecting Dauthuille to fall into his trap.

“He’s faster (than Cerdan), but he doesn’t hit as hard,” opined LaMotta, who came away with an ugly, purple hematoma nearly closing his left eye. “I didn’t think he would show the speed or stamina he had.

“I knew he’d drop his hands sooner or later. I waited and waited, but he just refused to tire. Then I chased him into my own corner and I saw his hands drop. Obviously he was hurt then. I knew I had him.”

Back in his dressing room, Dauthuille sobbed as the realization of his lost opportunity began to sink in. He had come ever so close to being a world champion, but in boxing no fight is ever truly over until the last punch is thrown or the last prayer offered and sometimes answered.