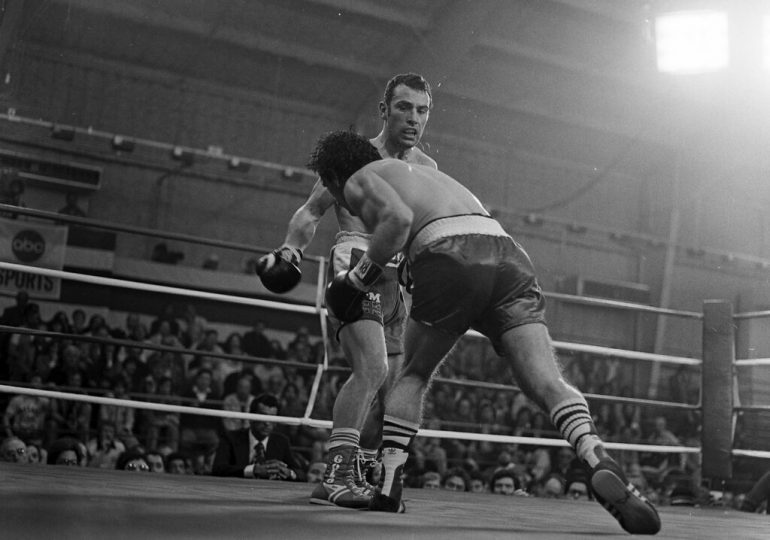 Minter looks to score against Vito Antuofermo in the first of their two undisputed middleweight title fights. Photo from The Ring archive
10
Sep
by Tom Gray

Minter, who also claimed British and European championships during the course of a nine-year professional career, scored a 15-round split decision over Vito Antuofermo in March 1980 to claim Ring Magazine, WBA and WBC 160-pound titles in Las Vegas. However, controversy erupted when the British judge awarded the Englishman 13 of 15 rounds following a close and competitive fight. Minter took out his frustrations on Antuofermo in a direct rematch, halting the Italian-American inside eight at Wembley Stadium.

Following a successful amateur career that culminated in Olympic bronze at the 1972 games in Munich, Minter turned professional in November 1971. The clever southpaw from Crawley in Sussex had mixed success domestically before picking up the vacant British title at the expense of Kevin Finnegan whom he outpointed in November 1975. Minter would ultimately score three 15-round decisions over Finnegan in two years.

Minter’s time at the top would end brutally at the hands of boxing legend Marvelous Marvin Hagler, who cut him to pieces inside three rounds in September 1980. Following a savage, race-fueled evening at Wembley Stadium, the winner was showered with debris by home fans who were aghast by the result. It is a night that will forever live in infamy.

Back-to-back losses to Mustafa Hamsho and countryman Tony Sibson signaled the end of Minter’s career in September 1981. However, it is the brace of triumphs over the super-tough Antuofermo for which he should be remembered. Since the advent of governing body titles, Minter is the only British fighter to hold the undisputed middleweight championship. That is a legacy to be proud of.

Minter’s son, Ross, competed as a welterweight in the early 2000s and had some success domestically.

All of the staff at Ring Magazine would like to extend their deepest condolences to the family and friends of Alan Minter.