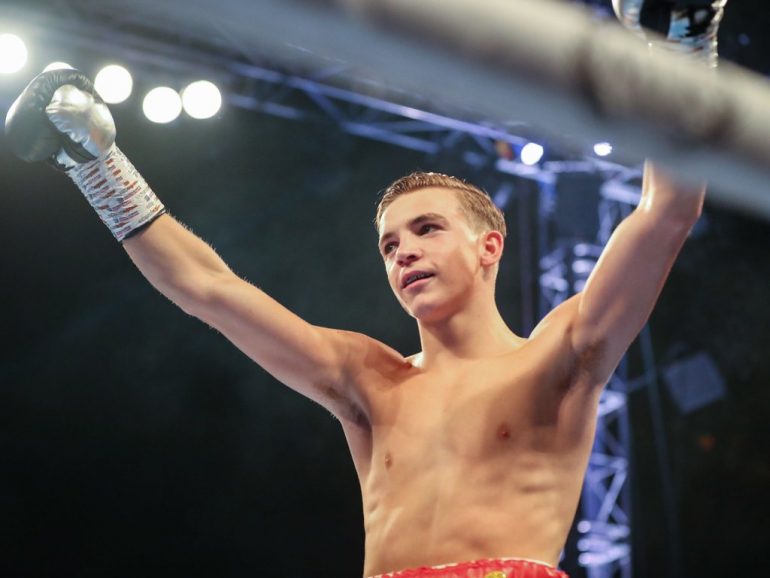 Best night of pro career and why: His professional debut against Kamil Jaworek on May 18, 2019 on the undercard of Billy Joe Saunders successful attempt at becoming a two-weight world titleholder.

“You only get one debut,” McCann told The Ring. “That night was brilliant. A traveler like myself and like Billy Joe Saunders, who was having a world title fight on the card. There must’ve been a thousand people there for me and it was wild and electric. Obviously, I was a bit nervous because I never fought without a headguard before. I was used to fighting with 10-ounce gloves and I had a transition over to 8-ounce gloves. All it takes in those small gloves is one shot and it is game over.

Worst night of pro career and why: McCann couldn’t think of an example, but he did reference a fight where he tuned a negative into a positive.

“I’ve dominated my opponents. In my fight against [Pablo] Narvaez I wasn’t too pleased about it, but I hurt him to the body in the fourth five times, so, overall, not really.”

What’s next: McCann’s eighth fight will take place on October 10 inside the BT Sport television studio in London. The card will be headlined by middleweight contender Liam Williams defending his British championship against Andrew Robinson. McCann’s promoter Frank Warren believes that his rising star, one of many in Queensbury Promotions stable tipped for world honors, could win the British title right now.

“He’s got a tremendous eye; his defense is good, and he’s got all the things that remind me of Naseem Hamed,” Warren said.

“I’m not saying he’s a copy of a Naz but the confidence, the hand speed and all that movement and power, he’s got all of those things. My only doubt because I’m not aware of it yet is how he’s going to be over 12 rounds. I think he’ll be okay, but we’ll find that out in time. Is he good enough to win a British title now? I think he is.”

Warren is no stranger to guiding young talent to the very top of boxing, but within the next 12 months we’ll find out if the team want to pump the southpaw’s brakes ever so slightly or go full steam ahead with a career that both fighter and promoter believe will travel through multiple weight classes. Right now, McCann is hungry for titles.

Why he’s a prospect: “The Menace” has been described as the future of British boxing by some experts. There are stories of him sparring fighters three or four weights above him and hurting them, but while the youthful, almost choirboy looks may fool those on the outside, there is a bit of the devil in McCann. In his professional debut it looked like someone had pressed the fast forward button such was his speed. And once a telling punch has landed there is a ruthlessness to him that isn’t just down to youthful exuberance to get the job done quickly. What he enjoys most about boxing is the opportunity to inflict pain on his opponents.

“I know it sounds silly, but I like hurting people. I don’t know why. I like seeing blood. I get a bit of a thrill out of it,” said McCann, who cited Edwin Valero as his favorite fighter to watch. “He could box, he could fight and he had heavy punches, which, in my eyes, I do the same thing. He wanted to hurt people and I’m the exact same.”

McCann may only be 19 but he has already settled down. He’s married, he has a desire to have children and his love for boxing ensures that at an age when others may be drinking, smoking, putting away as much junk food as possible and making the most of being single, McCann has already found what he is looking for.

Why he’s a suspect: It comes down to the unanswered questions that will be addressed soon. Can he go 12 rounds? What happens when the opposition is stepped up? What happens when someone takes his best shot and comes back with their own?

Storylines: McCann hails from a family who are no stranger to boxing themselves. His older brother was a former national amateur champion, their father boxed, as did one of their cousins too. McCann has been around boxing his whole life and has been in the gyms since he was five. “Punching bags and terrorizing people,” as he put it.

McCann left school at just 10 years old to box. He would travel for a few hours on the train from Birmingham to Bethnal Green, train in a gym for two and a half hours and then travel home. He would do that four times a week.

“I’m small now but could you imagine what I was like at 10?”

It appears McCann has grown up quickly, and from the conversation he had with The Ring you sense that he would not have had it any other way. Boxing has been in his blood since the beginning, filled his eyes from a young age and become his life as soon as he reached double figures. No wonder he finds it hard to switch off when he gets home at the end of the day.

“I get home and I watch boxing videos on my phone,” he said. “I struggle to switch off because I always want to train. My coaches have got to hold me back sometimes because I can over-train. I’m training mad. I’ve got so much hunger and fire in my belly and I believe in myself so much. I need to be held back.”