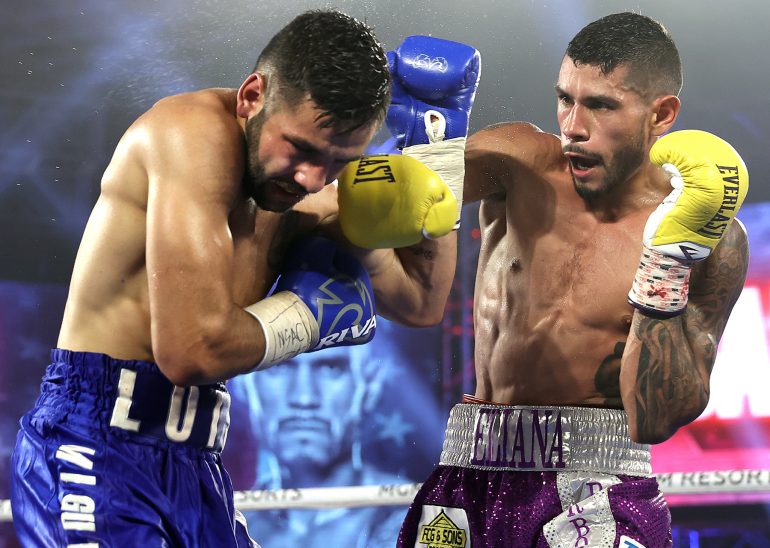 Junior welterweight contender Arnold Barboza Jr. kept the chains moving on what he hopes is a path to a world title opportunity on Saturday night.

Barboza dominated Tony Luis en route to a shutout decision in the co-feature of the Top Rank Boxing on ESPN+ card headlined by the Jose Ramirez-Viktor Postol unified junior welterweight world title bout inside “the bubble” of the conference center at the MGM Grand in Las Vegas.

All three judges scored it 99-90 for Barboza, who punched his way into a possible fight with former world title challenger Alex Saucedo (30-1, 19 KOs) on the undercard of the Vassiliy Lomachenko-Teofimo Lopez Jr. lightweight unification fight on Oct. 17.

Barboza (24-0, 10 KOs), 28, of South El Monte, California, controlled the action for entire fight. He used his jab and footwork to keep Luis off balance and his steady shots led to Luis bleeding from his mouth in the third round.

Barboza also connected with several hard body punches that took a lot of stream out of Luis (29-4, 10 KOs), 32, of Canada, by the time the fight hit the second half.

Barboza occasionally switched to a southpaw stance to further baffle Luis, who did very little. The only negative for Barboza came in the seventh round when referee Michael Ortega docked one point from him for a shot that strayed below the belt.

Barboza would have preferred to score a knockout but chalked his lack of one up to rust.

“To be honest, I haven’t fought since last November. I haven’t went 10 rounds in a while,” Barboza said. “He was a tough guy. I needed the rounds. I showed a little bit of what I’ve been working on, going southpaw and all that. I give my performance a B. I wasn’t really satisfied because I didn’t get the stoppage. It happens. 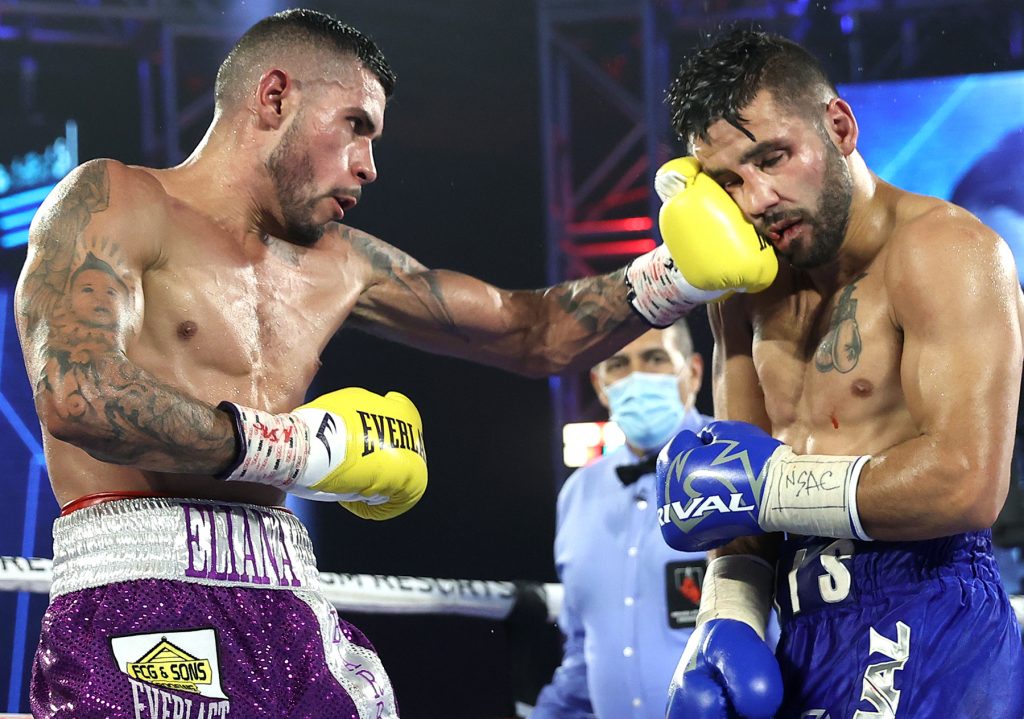 “Now I got the rust out. I feel like I’m ready for the next step. I want Saucedo. I think me and him would be a great fight. I know he wants it. I want it, so we could probably get it on soon. If he’s ready, I’ll be ready.”

Wilson (9-3, 6 KOs), 26, of Fairmont, West Virginia, came into the fight having won four bouts in a row but Rodriguez, a southpaw trained by Hall of Famer Freddie Roach, utterly outclassed him and then dedicated the win to his mother on her birthday.

Rodriguez (9-0-1, 9 KOs), 24, of the Dominican Republic, took control immediately, dropping Wilson with a clean straight left hand midway through the first round. He continued to dominate Wilson in the second round as he landed powerful uppercuts and even knocked his mouthpiece out in the final seconds.

In the third round, Rodriguez flattened Wilson with a crushing left hand that left him flat on his back in a corner as referee Robert Hoyle waved it off without a count at 1 minute, 3 seconds. Rodriguez, who was fighting for the third time in the MGM Grand bubble since July 2, then dropped to his knees and began strumming an imaginary guitar in celebration. 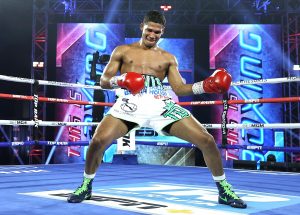 “I knew I had to be patient, but I knew I could set up that knockout. I knew I was smarter, I knew I was quicker and more powerful, and it was only a matter of time,” Rodriguez said through a translator.

Lightweight Raymond Muratalla (10-0, 8 KOs), 23, of Fontana, California, suffered a knockdown but otherwise dominated Cesar Valenzuela (15-7-1, 5 KOs), 30, of Phoenix, in earning a seventh-round knockout victory in his first scheduled eight-rounder and first bout under the promotional deal he recently signed with Top Rank.

Both fighters were coming off layoffs as Muratalla was in the ring for the first since November and Valenzuela for the first time in 14 months, but they got off to a quick start.

Muratalla landed a clean right hand on Valenzuela’s chin a minute into the fight, dropping him to a knee. But Valenzuela got it back in the second round, dropping Muratalla with a right to the head with 25 seconds left.

From there it was all Muratalla. He had a big fourth round, blasting Valenzuela with numerous punches during a sustained onslaught late in the round that had referee Michael Ortega seemingly close to stopping it.

Muratalla continued to break Valenzuela down with numerous right hands in the sixth round, when it again appeared that Ortega was close to stopping it. Before the seventh, Ortega told Valenzuela he needed to show him something or he would stop it.

Muratalla continued to press the action and continually forced Valenzuela back with precise punches and Ortega stepped in at 2 minute, 24 seconds.

The fight began with a bang as Bland (2-1, 0 KOs), 22, of Brooklyn, New York, dropped Muratalla, in his third fight in the bubble since June 11, with a right hand in the opening seconds. But he also landed another right hand while Bland was down, so referee Hoyle ruled it a knockdown and docked Bland one point for the accidental foul. From there the fight provided non-stop action with both fighters having their moments.

The Robert Garcia-trained Martinez was a 2020 U.S. Olympic trials champion, a five-time national champion and the No. 1-ranked fighter at 165 pounds in the USA Boxing rankings before signing with Top Rank in late June.

A southpaw, Martinez turned 25 last week, made his pro debut on July 14 and cruised to a shutout four-round decision over Jonathan Burrs. He did more of the same against Ward, who took a many heavy shots as the punishment mounted in the final two rounds. Martinez mixed up his punches, landing an assortment of punches, including many hard body shots.