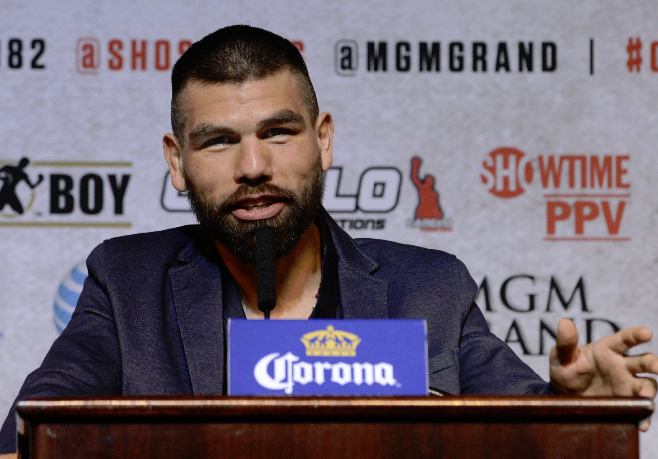 Defense was not on display as Alfredo Angulo and late replacement Vladimir Hernandez went to war.

But it was the southpaw Hernandez who came away victorious in a unanimous decision.

All three judges scored it a surprisingly wide 98-92 for Hernandez.

The super middleweight fight served as the chief support of the WBA junior middleweight title fight between Erislandy Lara and Greg Vendetti.

Hernandez connected with 33 punches in the opening round, including combinations to the head and the body, as the notoriously slow starter Angulo took some damage.

By the end of the first round, Angulo’s left and right cheekbones were visibly swollen.

The southpaw Hernandez, who took the fight on just a couple days’ notice, controlled the third round as Angulo’s face continued to balloon. However, at the end of the round, Angulo backed up Hernandez with a solid right hand.

#AnguloHernandez is a dogfight. These two are trading combinations, standing toe-to-toe, and the pace is slowing down. #PBConFOX pic.twitter.com/9X5trNkkpA

The fourth round was close as Angulo moved Hernandez towards the ropes. At the end of the frame, he connected with a right hook that backed up Hernandez.

The bout shifted in Angulo’s favor in round five. He again backed up Hernandez with a short right hook. It was a typical performance for Angulo. Take an absorbent amount of punches, keep coming forward, and land solid leather.

The former junior middleweight champion Angulo (26-8, 21 KOs), 38, of Mexico, invested heavily in the body in the sixth round. He landed a career-high 57 punches in the frame, including a hard left hook to the body. But Hernandez came back and connected his own series of hard shots, including a three-punch combination that Angulo walked through.

Referee Jack Reiss warned Angulo in the eighth round for a low blow, but that didn’t take away from the fact that Angulo connected with the more telling shots in the round. He moved Hernandez into the ropes and was ripping him with hard lefts and rights downstairs.

Hernandez (12-4, 6 knockouts), 31, a Mexico native based in Denver, dug deep in the 10th round, clipping Angulo with combination after combination. Both men threw it down to close the bout. Angulo knocked Hernandez back with a left hook before they traded lefts and rights until the sound of the bell.

The loss snapped a two-bout winning streak for Angulo. Last September, he scored an upset victory over former middleweight champion Peter Quillin in a split decision.

Two unbeaten fighters beat the brakes off one another in Saturday’s PBC on FOX opener.

And they both remained unbeaten. Junior welterweights Luis Arcon and Abram Martinez each scored a knockdown in the fight as they battled to a split decision draw at Microsoft Theater in Los Angeles.

In the second round, Arcon buckled Martinez’s legs with a powerful left hook. Martinez smiled and stuck his tongue out at Arcon, who then went for the kill. Both fighters then engaged in a furious exchange of blows, but it was Martinez who floored Arcon for the first time in his career with a counter left hook.

With about 1:20 remaining in round three, Martinez hurt Arcon with a five-punch combination, including a right hand that snapped his opponent’s head back.

Martinez was warned late in round 4 for landing a low blow.

In the sixth round, Arcon (10-0-1, 10 knockouts), 28, a Venezuela native training out of Coachella, California, landed with a right hand behind the head, which clearly angered Martinez. At this point in the fight, it seemed that Arcon had made some solid adjustments. He was controlling the pace of the fight, stepping back, and countering effectively.

Late in the frame, Arcon connected with a one-two combination that knocked Martinez back to the ropes, a blow that was acknowledged by his counterpart, as he nodded at him following the connect.

In the seventh round of their scheduled eight-round affair, Martinez (8-0-1, 6 KOs), 24, of Dallas, landed with an overhand right that seemed to bother Arcon, who initially looked to hold, then immediately shifted to the outside of the ring and recovered quickly as both fighters’ work rates diminished.

With two seconds left in the fight, Arcon and Martinez both threw left hooks, but it was Arcon’s that landed clean, dropping Martinez on his butt.