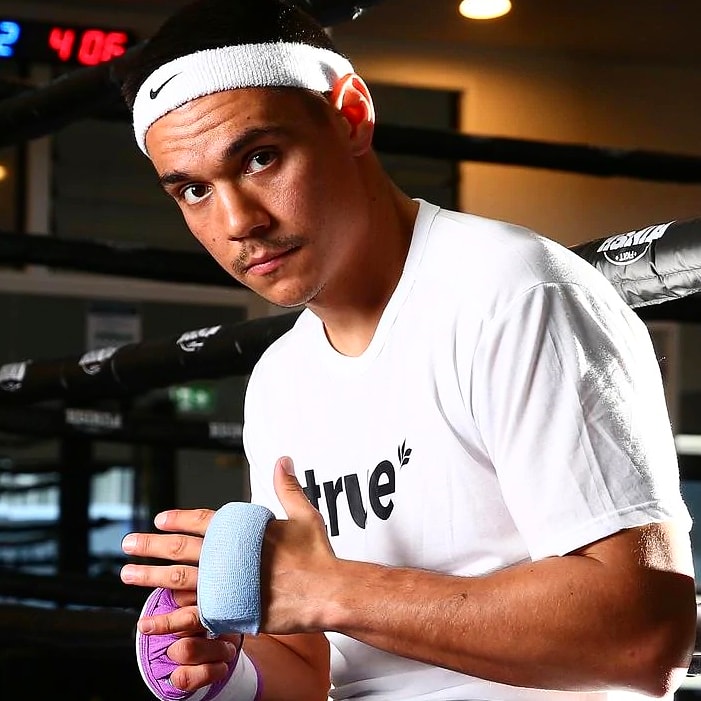 Tszyu, the eldest son of Hall of Famer Kostya Tszyu, steps out of his father’s considerable shadow against the former welterweight titleholder in front of what is expected to be a sizeable crowd.

“It’s a big fight, to have the whole world watching,” Tszyu told The Ring last Thursday. “This brings me closer and closer to the goal of a world title. To be fighting in front of 16,000 fans is an honor. To bring boxing back to life in Australia, because it’s been dead for quite some time now.”

The 25-year-old Tszyu (15-0, 11 knockouts) appreciates Horn will be a difficult assignment, but the boxer-puncher see’s areas he can exploit.

“He’s strong, he comes in awkward angles,” Tszyu explained. “To become a world champion and do what he did, you have to have strength. That’s what he does and he does it well.

“He makes a lot of mistakes and it was proven in the two loses he’s had. As much as he likes to rush in and be aggressive and awkward. there is a time you’re going to be vulnerable and I’m going to exploit those possibilities.”

Tszyu was born and raised in Australia after his father moved there in 1992. He grew up in the public eye and has had to deal with the pressures that come from having a famous father. He took them in his stride and decided to embark on his own professional career in December 2016.

Since then he’s worked his way steadily up the ranks and notably scored solid wins over Dwight Ritchie (UD 10) and Jack Brubaker (TKO 4). Showing considerable promise along the way.

“It’s really reached that point in his career, where he gets a good reception everywhere he goes,” said Glen Jennings, who has guided Tim since he turned professional. “He’s well and truly stepped out of his dad’s shadow as a professional fighter and this fight will elevate him even further. The reality is Tim is his own man. He has his own style and he’ll do whatever it takes (to reach the top).”

The promising Australian is pleased with how his pro career has panned out so far.

“It’s gone well,” Tszyu said. “I like the fact you’re able to extend the rounds and break your opponent. In the amateurs you can come out swinging for three rounds and finish the fight. In the pros, you have that time to break someone down, to see their weaknesses and go for the kill.”

Tszyu, who began his training camp in Sydney before moving to Queensland a month ago when some of the state borders were closed, has enjoyed a productive training camp. Though, he admits, due to the COVID-19 pandemic, things have not been as smooth as his team would have liked.

“It’s been up and down as every training camp is,” he said philosophically. “It’s never easy. Through the hard times, you’re able to push. It’s all going to show on fight night.”

Tszyu and Horn have exchanged words on social media and through the press but the younger man is refusing to be drawn any further.

“I’ve got nothing bad to say,” Tszyu said, before offering a thinly veiled dig. “He’s been talking a bit of smack. I just think he’s an unhappy guy, when you’re an unhappy guy, you’re going to say unhappy things.

“He’s clearly self-conscious about something. I don’t worry about that. I focus on one thing and that’s to train hard and then let my training show in the fight.”

Victory is a must if Tszyu is to move closer to his ultimate goal in boxing.

“I want be in with the top contenders in the weight division,” he admitted. “I’ve got a bit of a road to get there, but I’m nearly there. I feel this is going to wake up everybody in the division if I beat Jeff Horn, who is a former world champion.

“(I’m about) two, three fights (from being ready to fight for a world title). I just want to fight the best out there.”

Jennings echoed his charges thoughts on the bigger picture.

“It’s time for him to step up to the next level and he’s taking it with both hands,” the manager said. “He’s very excited. This is what being a professional boxer is all about. You’ve got to take these challenges. Tim’s one of those gifted athletes, he can’t keep still.

“He always wants to be better, every fight come out better on the other end. These sort of challenges against quality opponents like Jeff, that’s what Tim’s about.

“I would imagine moving on post-Horn. Everything we do is going to be a forward step. God willing, you’ll see Tim’s name up in the big lights and we keep focusing on exactly that. Let him grow with the sport, but let him do with in a manner where he challenges all comers.”

Horn was a talented amateur who represented Australia at the 2011 World Championships and 2012 Olympics, before turning professional the following year.

His crowning moment came when he stunned Manny Pacquiao to win the WBO welterweight title in July 2017. After one successful defense, he lost to Terence Crawford. He returned with a first-round stoppage over Anthony Mundine, before splitting two fights with Michael Zerafa up at middleweight. At 32, Horn (20-2-1, 13 KOs) knows that if he ever wants to fight on a larger platform again beating Tszyu is imperative.