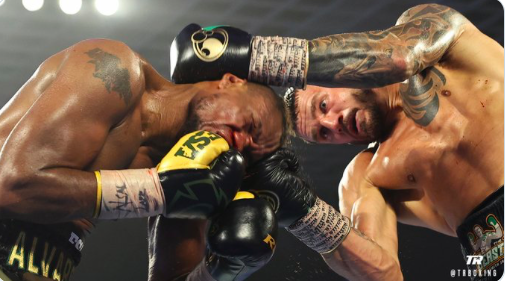 Smith looked comfortable and focused from the get go. His heavy hands bothered Alvarez. Here, in this Mikey Williams pic, Alvarez feels the effects of both.
22
Aug
by Michael Woods

Joe Smith had a rep for having hands of stone, but he could be out boxed. He knew that was the rap on him, and he wanted to change that. It didn’t hurt at all that he went from being a guy in his 20s, to a 30 year old, and he realized that he had to work his tail off, all the time, not so much pick and choose. Maturity, I guess that’s what it can be boiled down to.

Light heavyweight Smith is what they used to call a “lunchpail guy,” someone who doesn’t look fancy, but gets the job done usually. It might be time to widen out that tag, because he boxed smart, and took it to Eleider Alvarez in a WBO title shot eliminator which served as the main event on Top Rank’s ESPN+ show in Las Vegas Saturday evening.

The 30 year old Smith (26-3 with 21 KOs; promoted by Joe DeGuardia and Star Boxing) listened to corner men Gerry and Phil Capobianco in between rounds. The Capobiancos, not the trainers who ESPN production chose to spotlight with a pre-fight piece shown before the 12 rounds or less clash. Marc Ramsay got the love from production, but maybe before the next fight, the memos will go out. His trainers aren’t high profile guys but apparently have skills….and Joe Smith isn’t “just” a blue collar brawler, he can box a little bit, he has solid stamina, and as Alvarez can attest, he can crack. 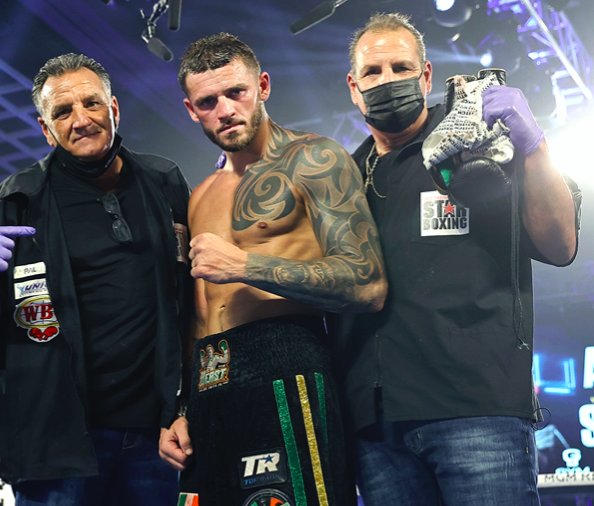 The end came in round nine. A straight right hand, a lead right, sent the Montreal resident Alvarez down, under the ropes. The Colombian native’s nose had started to gush some a few rounds before and you wondered if he was an old 36, if his body could obey his brain if called to transition to a higher gear. The ex 175 titlist Alvarez paused, then tried to slide out from the ropes and beat the count. Too late; Tony Weeks reached the count of ten. 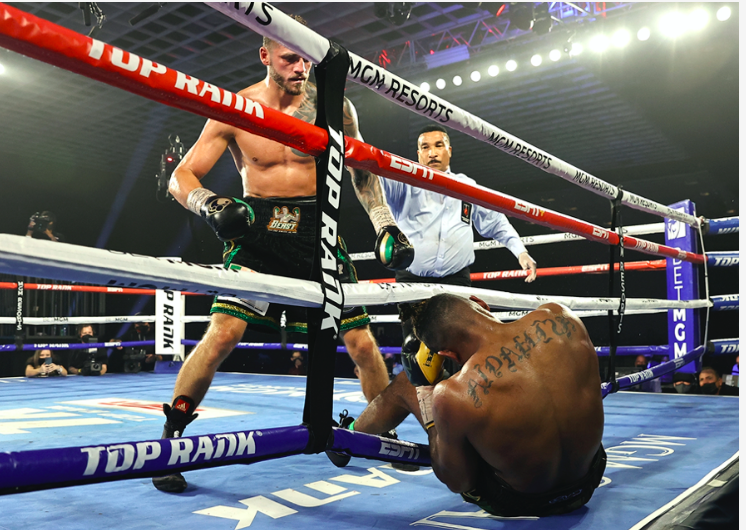 Through the ropes, again. This is becoming a Joe Smith trademark. Alvarez didn’t tumble to the floor, like Hopkins did, though. (Mikey Williams photo)

Smith didn’t whoop or holler, you get the sense he’d be chill even if he hit a fat lotto payday. Dude runs a tree servicing business as his 9 to 5, and he stayed even tempered talking to Bernard Osuna at the MGM Bubble after the conclusive finale.

I’m not just a hitter, that’s what he wanted to prove coming in to the fight. I think I did so….And guess what, I got the KO as a bonus, he said, almost chuckling. “Coming into this camp, I knew I had to work on my boxing,” he said after the ending. “I wanted to be sharp, throw a lot of straight punches. I watched his fight with {Sergey} Kovalev, and Kovalev kind of set the way to beat him. So we watched that and worked off of it. I knew coming in today I had to box a little more because he’s got that great right hand. He caught me with it a couple times, but I can take a punch, too.”

Numbers, from the CompuBox crew.

We all know that title shot eliminators are not often set in stone. Right now the WBO title is vacant. But if a Joe Smith vs Artur Beterbiev (IBF champ) clash gets made, it will be that much more anticipated after that solid triumph by Smith than most would have predicted coming in to the battle. 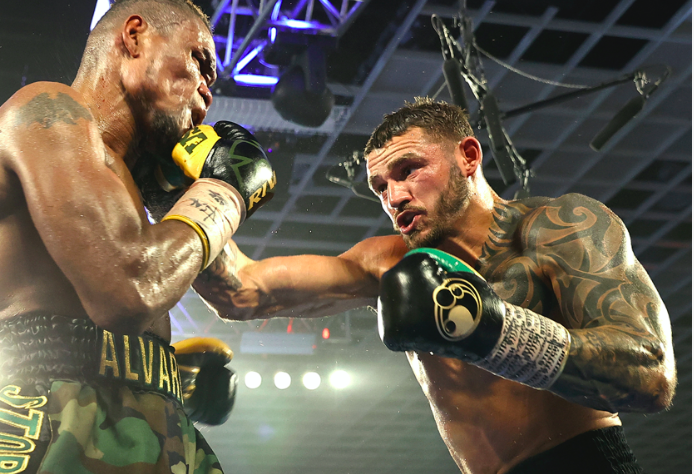 The power and the pressure sapped Alvarez. (Photo by Mikey Williams for Top Rank)

Rob Brant, who held a middleweight crown, would like to get one back in his possession. The Minnesota native, to that end, latched on to Team Bomac, and did a three month camp with Terence Crawford’s tutor Brian McIntyre. It showed, in the support scrap that saw Brant stop out Vitaliy Kopylenko. After the fifth round, ref Jay Nady went to the corner of the 36 year old. How you feeling, he asked. The corner made it clear, their guy wasn’t feeling great. His face bore the effects of Brant’s patient attack, and so Nady pulled the plug. 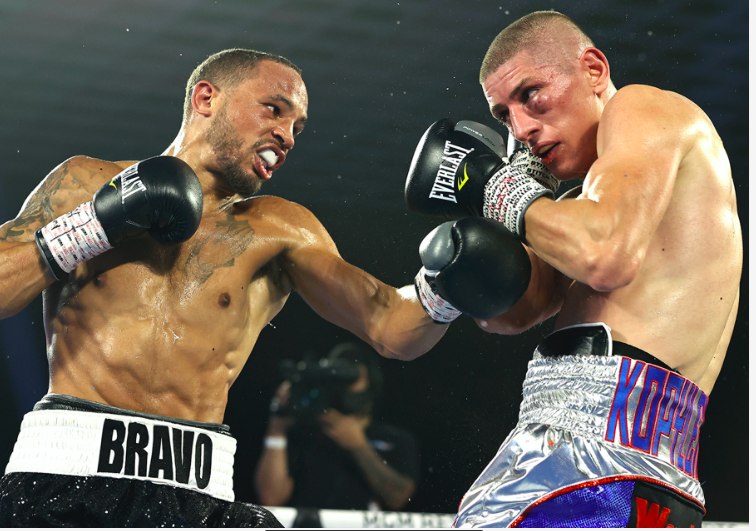 That left eye had the ref worried, so he went to the corner, asked about it, and Kopylenko’s corner said no mas. (Photo by Mikey Williams)

The 29 year old Brant, living in Texas, rose to 26-2, and his style will probaby clear into gear more, if he stays with McIntyre. The Ukraine born loser, living in Cali,  dropped to 28-3, and is on a two fight slide.

Quick, name all the fighters who’ve elevated themselves and their profile considerably during peak pandemic time. Not many, right? Clay Collard has to be near the top of your list. “Cassius” Clay Collard (below) got his fifth win in 2020, he upped his record to 9-2-3, in taking out Maurice Williams in round two. 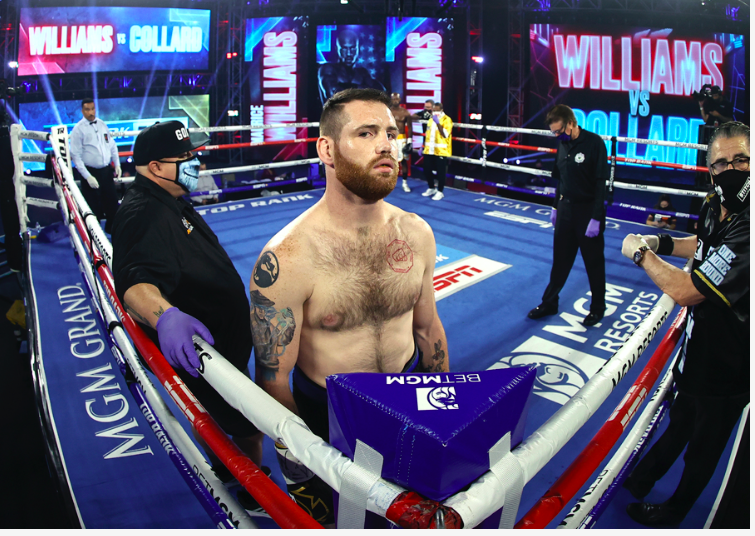 The ref, Tony Weeks, hopped in when Williams ate unanswered punches and he sort of turned away. A well timed right dropped Williams, out of Oklahoma, before that.

The loser came to Vegas 7-1, and seemingly thinking he’d show his skills against the sometimes awkward looking Collard. Nope; Collard does square up for many of his flurries. The 27 year old Idaho resident, now going more so all in after being an MMA guy, is patient and cool while in combat, and is pretty cerebral in the squared circle. The middleweight has earned his newfound minor celeb status.

He showed some of the demeanor that has helped him build his fan base. “I’m just a fighter,” he said to Osuna post-fight. “I like getting out there as often as possible and entertaining the fans. I appreciate all the love and support from the fans, and I enjoy putting on a show for them. I’ll fight as often as possible. I love fighting on these Top Rank shows, and I look forward to the next one. This has been quite the ride.”

Julian Rodriguez upped his record to 20-0 and at the expense of Anthony Laureano, who came in 13-0. The junior welter from Jersey Rodriguez has dealt with injuries and management issues, and he looked like he wanted to make up for lost time. 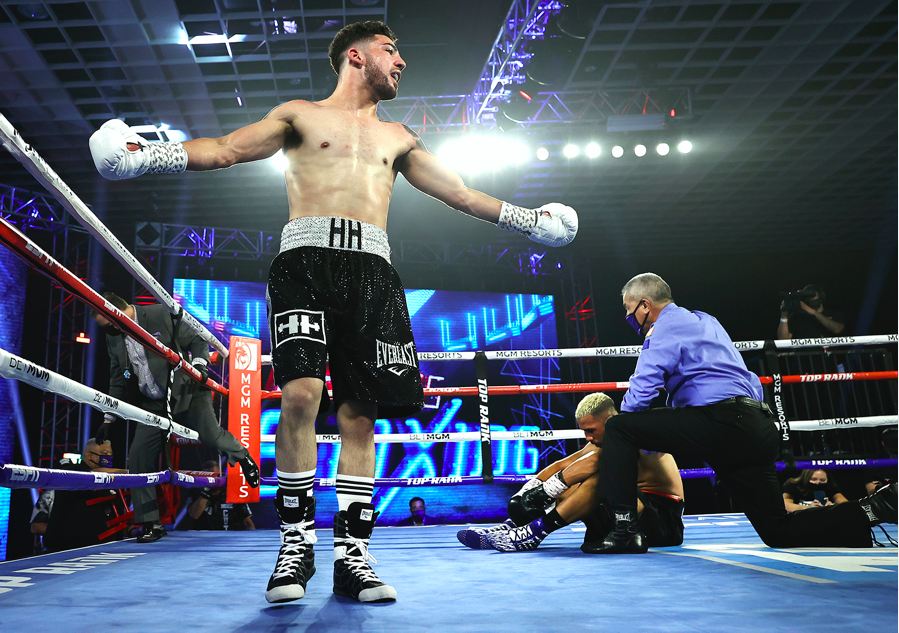 Rodriguez sure as heck looks like he’s primed to make a run at 140. (Photo by Mikey Williams)

He ripped to the head, he smashed to the body, he wanted to get Laureano out of there quick. He succeeded, too. The scrap didn’t get out of the first round.

The 25 year old Laureano, fighting out of Connecticut, had weight issues for this fight, and beefed about what gloves they’d use. All in all, the experience seemed to be downright horrid for him.