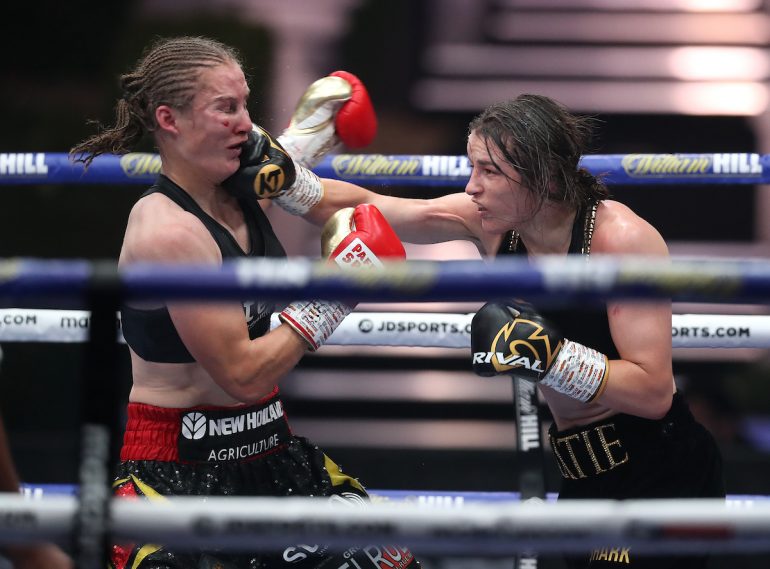 Katie Taylor was pushed to her limits again by Delfine Persoon, but this time around, she created enough space to deliver another close victory.

The bout was a rematch of their June 2019 bout, which some thought Persoon deserved to win.

However, the sequel ended with the same result as Taylor retained her undisputed and The Ring lightweight championship belts with a unanimous decision over a game, brave Persoon.

Judge Victor Loughlin scored it a wide 98-93 for Taylor. John Latham and Mark Lyson each had it 96-94 for the 2012 Olympic gold medalist, who remains undefeated.

Taylor (16-0, 6 knockouts), 34, of Bray, Ireland, was fighting smarter compared to her first outing against Persoon, but it was still a dogfight in round 7. Taylor was making Persoon miss and countering to the body, but Persoon continued to charge forward landing hard shots.

At the end of the frame, Taylor had a good-sized welt on her forehead.

With 30 seconds remaining in the eighth round, Persoon hurt Taylor with a big right hand. She followed up by knocking her back into the ropes with a left-right combo.

Taylor rebounded with a commanding ninth round. She nailed Persoon with a clean right hand. Then she boxed at distance beautifully as Persoon (44-3, 18 KOs), 35, a native of Belgium, charged in recklessly, connecting with a series of left hooks that opened up a cut over Persoon’s left eye.

Chris Kongo was tested by Luther Clay, but his power was the ultimate equalizer. 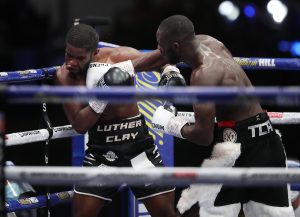 Kongo, who last fought 16 months ago, knocked out Clay with a counter left hook in the ninth round of their scheduled 10-round affair.

Kongo stunned Clay in the fourth round with a clean left hook. He feinted with the jab and lunged forward and found the target, causing Clay to hold on. At the end of the round, Kongo utilized the center of the ring, keeping Clay at bay behind his jab.

With about 1:40 left in the ninth round, Kongo badly hurt Clay with a left hook.

Clay rallied momentarily as he did in the fifth round, but Kongo feinted downstairs and flattened him with two counter left hooks to the head. When he went down, Clay’s corner immediately threw in the towel to save their fighter.

Heavyweight Alen Babic lived up to his “The Savage” mantra.

Babic remained undefeated with a second-round demolition of an outmatched Shawndell Winters.

Babic battered Winters throughout the first round, ripping the 39-year-old with hard lefts and rights to the body.

Babic hurt Winters with a massive overhand left and a follow-up flurry of punches dropped him against the ropes for a knockdown.

It was more of the same for Babic, who connected with a vicious left hook, but as Winters was on the way down, he pushed him. As a result, referee John Lathan ruled it a slip.

Latham picked Winters up off the canvas and allowed the fight to continue. Babic then picked up where he left off and finished Winters with a clean left hook to the head.

Winters (13-4, 12 KOs) has suffered back-to-back knockout defeats. On February 29, he was stopped in the fifth round by former heavyweight titleholder Joseph Parker on the undercard of Mikey Garcia-Jessie Vargas in Texas.

Babic, a native of Croatia, has won all four of his pro bouts by knockout.

It was a controversial start to Matchroom Boxing’s last of four Fight Camp cards on Saturday in Brentwood, Essex, England.

Middleweights Jack Cullen and Zak Chelli fought to a controversial 10-round split draw in a bout that Chelli appeared to have won clearly.

Ian Jon Lewis scored the fight 95-95, Victor Loughlin submitted a score of 96-95 for Cullen, and Mark Lyson had it 97-93 for Chelli. The Ring scored it 98-92 for Chelli, who landed the more damaging punches throughout the fight.

Chelli had Cullen in a bit of trouble late in the first round after connecting with a series of looping overhand rights.

Cullen backed up Chelli repeatedly with the jab and snuck in a pair of right crosses at the beginning of the fourth round. But with less than a minute in the round, Chelli surprised Cullen with a right to the body, causing his mouth to gasp for air. Chelli then followed up with a pair of big overhand rights, opening up a cut over Cullen’s right eye.

In the fifth round, Chelli battered Cullen almost exclusively to the body. He followed up with a slew of overhand rights that caused more damage to Cullen’s right eye.

During the break, Cullen was struggling for air and breathing heavy.

It was a bloody round for Cullen in round 7. A hard left jab from Chelli caused more blood to leak from his nose. But the mess didn’t end there, as a stiff right hand from Chelli re-opened the cut around his right eye.

Badly needing a knockout, Cullen went for the gusto in the final round, but it was Chelli who landed a big overhand right that caused Cullen to hold on.

Both fighters fought to the finish, but it was Chelli who appeared to emerge with a deserving victory. But the 22-year-old had to settle for the first draw of his pro career. His record stands at 7-1-1 with three knockouts.

“Little Lever’s Meat Clever” Cullen (18-2-1, 9 KOs), 26, was coming off a second-round TKO of Tomas Reynoso in March. Prior to that outing, he suffered an eighth-round stoppage defeat at the hands of unbeaten Felix Cash last November.