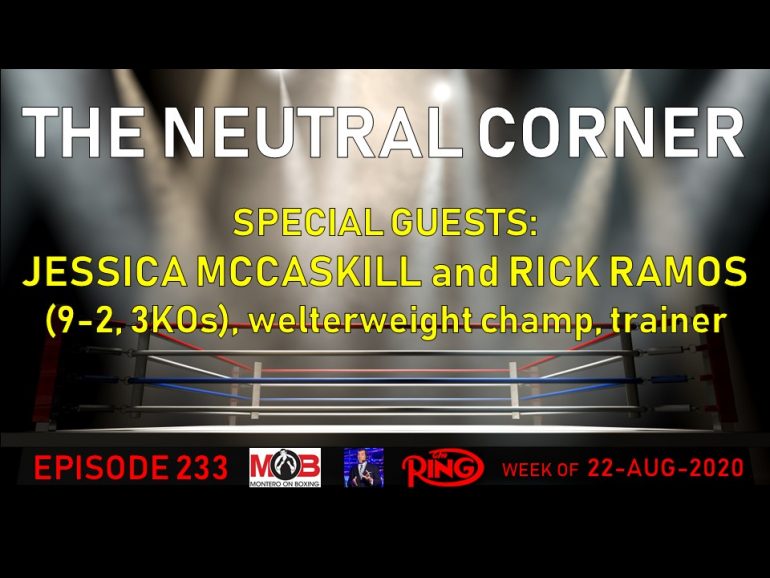 On episode 233 of The Neutral Corner boxing podcast, host Michael Montero was joined by Jessica McCaskill and her trainer Rick Ramos. McCaskill (9-2, 3 KOs) scored a historic, majority decision win over long-time welterweight champion Cecilia Braekhus in Tulsa, Oklahoma Saturday night. While most fighters would be away on vacation celebrating, Jessica was right back at the gym on Monday.

“Rick and I came back home to Chicago on Sunday,” she told the Ring. “I’m back at work today at my full-time job. I work from the gym. It’s no days off.”

Ramos not only trains McCaskill, but other young women out of Chicago like Summer Lynn (2-0, 1 KO). He’s quickly building a reputation for developing female boxing talent at his gym. The owner of the Body Shot Boxing Club says that’s just fine with him.

McCaskill first hit the conscious of the boxing public when she travelled to London to face Katie Taylor in 2017. Although she came up short and lost a unanimous decision to the former Olympic Gold Medalist, McCaskill was competitive and gained invaluable experience. While many other trainers would have protected their fighter from such a challenge in only their seventh pro fight, Ramos jumped at the chance.

“The Taylor fight was more of an opportunity play for us to get into the big leagues,” he said. “I thought we could go over there to England and make it rough on her. Jessica deserves a lot of credit, nobody wanted to take that fight. We played it right I think.”

The duo took lessons learned from the Taylor loss into subsequent fights, which included a move to junior welterweight, where McCaskill would unify two world titles, and then up to welterweight, where she challenged Braekhus for her undisputed championship. Coming into their fight Saturday night, Braekhus had reigned as the unified champ for more than a decade. But it would be the American’s night in Tulsa, she pressed the action from the onset.

“The plan was to see what she was going to come with in the first minute of the fight,” McCaskill said, “I thought she was going to move and jab a lot. Once I realized she was coming forward, giving herself to me, I turned it on and never looked back.”

The fight was close and some fans disagreed with the scorecards, meaning a rematch could be a lucrative option for both women in the future. However, Ramos made it clear he wants McCaskill to face the winner of the Taylor-Persoon rematch next.

“I think a rematch with Taylor next (should she defeat Persoon this weekend) makes sense financially for us, for Katie and for Cecilia,” he said. “Since we have all the welterweight belts, I say the fight should be at 147 and they (Matchroom Boxing) can pay us an extra $100,000 a pound, if they want us to go lower.”

Both McCaskill and Ramos will be watching closely as Taylor looks to silence the critics with a decisive victory over Delfine Persoon Saturday night in Brentwood.

@54:47 review of PBC on Showtime, including the Romero-Marinez robbery, Matchroom USA Fight Camp in Tulsa