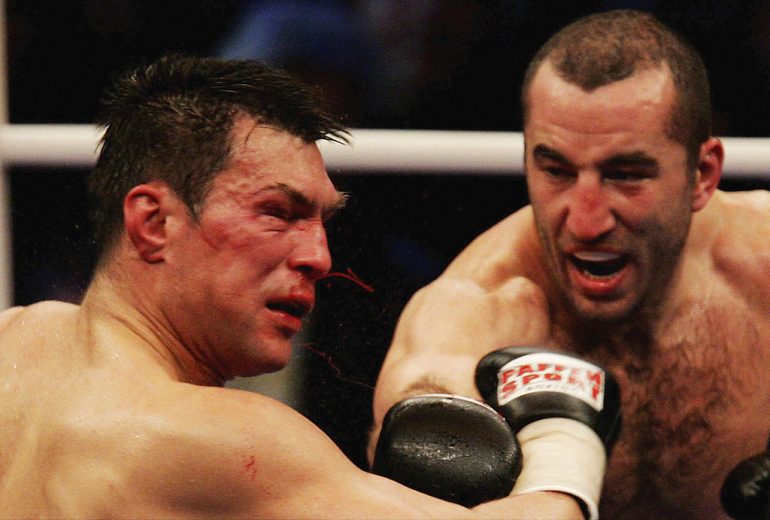 Underrated boxer-puncher Fabrice Tiozzo was a mainstay in the light heavyweight and cruiserweight divisions in the mid-to-late 1990s into the 2000s, during which time he captured three world titles.

Tiozzo was born in Saint Denis, a suburb in the north of Paris on May 8, 1969. He grew up in a boxing family and was the youngest of four children.

“I started at age 12,” Tiozzo told The Ring. “I went with my father to see my brothers training and fighting. I followed them into boxing.”

His eldest brother, Franck, competed sporadically at heavyweight, while Christophe went on to win the WBA super middleweight title.

After compiling an amateur record of 40-6, Tiozzo turned professional in New York in November 1989. However, the Frenchman quickly developed in his homeland, winning the national title against battle hardened former European champion Eric Nicoletta in June 1991.

Tiozzo had a record of 25-0 when his team brought WBA 175-pound titleholder Virgil Hill over to France to face their man in April 1993. “The Bear” made the worst possible start, hitting the canvas in each of the first two rounds. However, he slowly worked his way back into the fight before dropping a 12-round split decision to the future Hall of Famer.

It was a good learning curve for Tiozzo, who rebounded to win the European title at the expense of tough Eddy Smulders less than a year later. Two defenses followed and it was a more season version of the Frenchman that entered his second world title fight against another future Hall of Famer: Mike McCallum.

The bout took place in Lyon in June 1995 and the challenger got off to a good start, dropping the three-weight world titleholder in the second round. Tiozzo, 26, was able to impose his youth on the 38-year-old McCallum and stay a step ahead en route to a competitive unanimous decision win.

“I had come to my goal by beating a great champion,” he said of his title triumph. “That secured my future.”

In his only defense, Tiozzo bested the future WBC super middleweight beltholder Eric Lucas by wide unanimous decision. However, the struggle to make 175 pounds led to him vacating the title in order to pursue further glory at the old cruiserweight limit.

Tiozzo faced WBA 190-pound titleholder Nate Miller in Las Vegas on a Don King promotion in November 1997 and edged matters by hard-fought unanimous decision. He made three successful defenses – all inside the distance  – two in France and one on the undercard of the Lennox Lewis-Evander Holyfield rematch in Las Vegas.

Tiozzo was then given the chance to gain revenge on Hill, the only man to have beaten him as a professional. The pair met in Villeurbanne, France in December 2000, but things didn’t go as planned. The habitually durable fighter was dropped three times in a startling first-round TKO loss.

“Hill had canceled our fight several times and I got tired,” Tiozzo explained. “At the same time, my agreement with Don King and the TV [became poor]. I got tired of it. But I do not regret it because after that I became world champion again and that is the best moment of my career.”

Following just two wins in 27 months, Tiozzo made the surprising decision to drop back down to light heavyweight for a shot at WBA titleholder Silvio Branco.

“In 2004 I had to lose 23 kilos [50 pounds], whereas 10 years earlier I could not make the weight,” Tiozzo recalled. “By doing big diets my body was damaged and losing weight had become impossible.

“I did everything by pride and will. Twelve weeks before the fight I’m in the hospital because my stomach hurt. They gave me a treatment and said that I could not fight. I took two days of reflection and decided to still make the match.

In what was a close, physically grueling encounter, Tiozzo went down in the eighth and Branco in the 11th. Incredibly, the gallant Frenchman won a 12-round majority decision to claim his third world title.

The following February, Tiozzo took his title to Germany to face Dariusz Michalczewski, the man who had beaten his sole conqueror, Hill. Tiozzo stopped the rugged Pole in six rounds, but he didn’t fight again for almost 18 months.

“I tried to fight again in 2011. I was in great shape but suffered a detached retina three weeks before the match. I had an operation and two months off. After that I told myself that I really had to stop.”

Tiozzo, now 51, is divorced and has two children. He lives in Lyon and is a personal trainer to entrepreneurs and private clients. He also gives conferences to companies and works as a commentator for Canal +.

BEST JAB
Virgil Hill: A jab to show boxing schools. It is fast but, especially, very accurate and good timing.

BEST DEFENSE
Mike McCallum: I always found the flaw, even when I lost (laughs). McCallum had a good defense, good blockages but mostly recovered after blocking the shots.

SMARTEST
Branco: Intelligent and very professional. Nothing specific, but he was a boxer, always ready. He worked well on the faults of his opponent, a good professional.

STRONGEST
Eddy Smulders: My hardest fight, and yet it was not a world championship, it was a European championship. He was an undefeated boxer-puncher, and fast, but I won in round seven.

BEST PUNCHER
Nate Miller: He really hurt me. It was not a crazy fight, but all his shots were hurting me. Hill’s power? No, the first fight I was very young and he was in top form, and the second I had not trained.

BEST CHIN
Tim St. Clair: A madman. It was in 1994, I hurt my hands, I could not take off my gloves off because my hands had swollen. I won by KO to the liver.

BEST BOXING SKILLS
McCallum: Because he was always there at the right time and fired back after blocking your shots. A lot of experience and hard-headed.