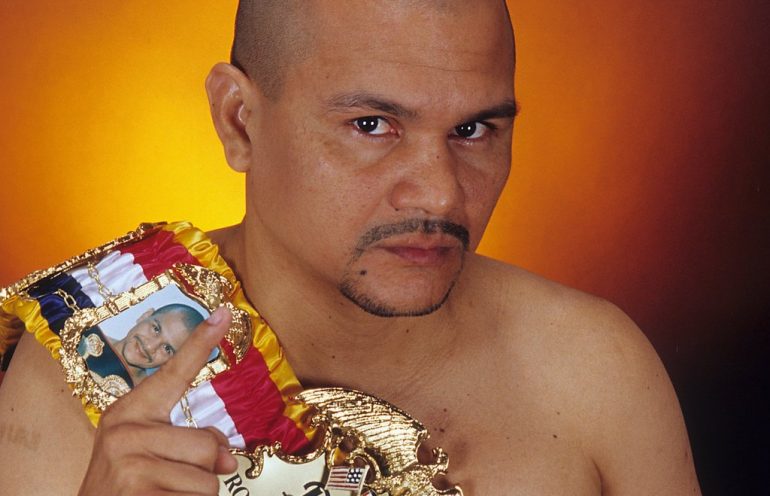 Photo from The Ring archive
04
Aug
by Anson Wainwright

Alvarez was born in Ciudad Sandino, a municipal of the Nicaraguan capital Managua, on May 6, 1970. He was the last-born child of seven and his early years were difficult in the war-torn country.

When he was nine years old his father and brother were killed in the Nicaraguan Revolution. The young child saw things that nobody ever should when he accompanied his mother to look through the bodies in the pastures.

“Life hit me harder than boxing because I enjoyed boxing, and my life was very sad without the warmth of my father and my brother,” Alvarez told The Ring. “My mother cried every day and I consoled her.

“Together we started a new life. She never remarried and dedicated herself to giving me the best she could. I would consider her my hero.”

A difficult start to life helped Alvarez form the toughness that would serve him so well in his boxing career.

“I learned to defend myself because I did not have a father or a brother to defend me from the constant abuse of children bigger than me,” Alvarez explained. “That gave me a steel temper and a warrior’s heart. I never feared anything or anyone. I was continually in fights against other young people to defend the weak. I hate injustices.”

When Alvarez was 16 he did two years military service and was involved in the dispute between the Sandinista government and the counter revolutionaries, financed by then-U.S. President Ronald Reagan.

During that time, he became interested in boxing and enjoyed a successful amateur career, winning gold at the Central American games and three national titles. After compiling a record of 75-12, he turned professional in December 1992.

Alvarez won his first 12 fights before heading to Venezuela to face Jose Bonilla. “El Bufalo” impressively stopped the future flyweight titleholder in the 11th round.

Following six more victories, Alvarez traveled to Sa Kaeo, Thailand, a small town 200 kilometres east of Bangkok, where he successfully unseated long-reigning Chana Porpaoin to become the WBA strawweight titleholder by hard-fought split decision in December 1995. Looking back, he feels this was his proudest moment in his career.

The marauding champion made four successful defenses, traveling to Asia for three of them. He would end a 14-month hiatus when his manager Luis Spada set up a unification bout.

“Don King made an offer of $265,000 tax free to face Ricardo Lopez in Mexico City,” revealed Alvarez. “I had to sign a promotional contract with Don King for four years. I accepted, thinking about bigger projections for my career.”

The two best 105-pound fighters in the world collided on March 3, 1998, on the undercard of Julio Cesar Chavez-Miguel Angel Gonzalez, before a sizeable, raucous pro-Lopez crowd.

“I went to Mexico and I won against Lopez,” said Alvarez. “I sent him to the canvas [in the second round] and I hurt him very bad. They stripped me of the triumph with an [eighth round technical] draw [because of a headbutt that cut Lopez]. It took 22 minutes for the decision to be announced and one of the scorecards was lost.”

Alvarez yearned for a rematch for several months and finally received news from his manager.

“On October 13 Luis Spada called to inform me that Don King made an offer to fight against ‘Finito’ Lopez on November 13th in Las Vegas,” Alvarez recalled. “The time was very short, I was overweight – 137 pounds – and I had to make 105. That would be impossible. Don King said that if I did not accept there would never be a rematch. He touched my pride, so I decided to accept.

“I worked very hard to eliminate 30 pounds from my body in just one month. My body was destroyed. When the weigh-in came I could not make 105 pounds [Alvarez weighed 108¼], and more suffering began because Team Lopez demanded that I should weigh in the next day at 10 o’clock. I accepted the deal.

“In the morning we went to the second weigh-in and they informed me that it would be at 2 p.m. I returned at 2 p.m. and they told me that the weigh in was at 6 p.m. I was very angry, I wanted to destroy Lopez, although I felt very bad. When I arrived at 6 p.m. Lopez was rested, well fed and I did not eat all day. I did not recover and felt very bad physically.”

Alvarez was stripped of his WBA title although Lopez, whose WBC strap would not be at stake, was eligible to win it.

Both men fought their hearts out at a newly contracted rehydration weight of 115 pounds, and at the conclusion of 12 highly competitive rounds Lopez eked out a razor thin split decision.

“I did a lot of damage to the face of ‘Finito’ Lopez, more than anyone before,” he said. “Lopez and his team never wanted a third fight with me.”

Alvarez’s struggle with weight prompted a move to junior flyweight, however, he was inactive for large spells. Following three wins, he faced Beibis Mendoza for the vacant WBA strap on the Evander Holyfield-John Ruiz 1 undercard in Las Vegas and was disqualified in the seventh round for low blows.

The pair met in a rematch in March 2001 and Alvarez edged matters by hard-fought split decision. They met twice more and, again, Alvarez edged both bouts, claiming The Ring Magazine belt in the third encounter. Sandwiched between fights three and four was a unification battle against IBF titleholder Victor Burgos. They fought to a draw and both men retained their titles. 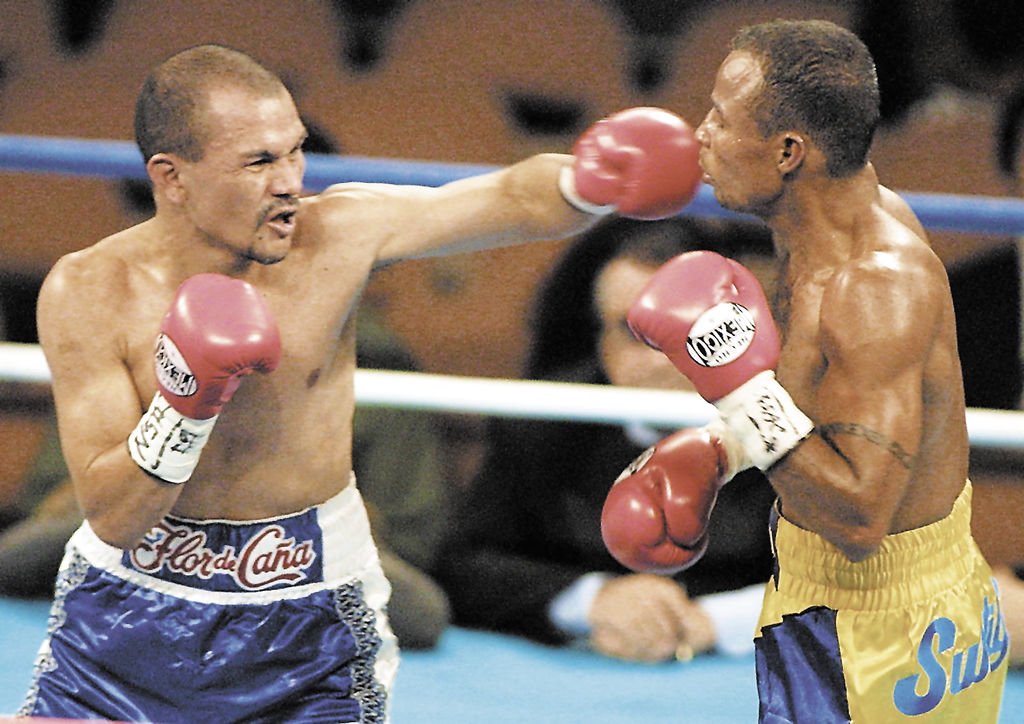 Alvarez’s career was blighted with inactivity, something that still disappoints him to this day.

“I signed a promotional contract with Don King Productions and he kept me inactive,” Alvarez explained. “He only offered me one fight every year. The deal was three fights a year. I put all my trust in this evil promoter, but he did not let me fight with other companies. I fought every 14 months, and I couldn’t keep the weight off.

“I lost a lot of money and credibility because of the inactivity I was subjected to by Don King. Don King was the worst thing that could have happened to me.”

Alvarez (37-4-2, 24 knockouts) retired after being stopped for the first time and only time in his career by Jorge Arce in April 2006, although he did come back for one ill-advised bout in 2012.

Now 50, the former two-weight world titleholder is married and lives in Managua. The couple have a young son, and Alvarez has two children from a previous relationship. He formed a company called Bufalo Boxing Promotions seven years ago and currently has 22 fighters under contract. Alvarez was also appointed as Ambassador General for the WBC Care Foundation and he is involved with the BoxVal Foundation of Pope Francis. He gives motivational lectures to help prevent young people taking drugs and alcohol and carries out charitable work for elderly people and poor families in Nicaragua with the help of the local government.

Alvarez graciously took time to speak to The Ring about the best he fought in 10 key categories.

BEST JAB
Ricardo Lopez: Lopez threw it with very good accuracy and with a lot of continuity.

BEST DEFENSE
Lopez: He knew how to dodge my blows when I attacked him and kept his guard up.

FASTEST HANDS
Beibis Mendoza: His combinations were strong and very fast with a lot of precision. It cost me a lot to be able to dodge his blows.

BEST FOOTWORK
Lopez: Ricardo “Finito” Lopez is a master moving in the ring.

SMARTEST
Lopez: He knew how to use his energy in each round and did not waste energy in vain.

STRONGEST
Jorge Arce: Arce had excellent strength and was very brave in the fight.

BEST CHIN
Chana Porpaoin: I hit him very hard for 12 rounds with his face completely hurt, and with six-ounce gloves. He never had any fear.

BEST PUNCHER
Arce: Arce was the only one who could beat me by KO – in six rounds. I was looking for my third world crown in different weights.

BEST OVERALL
Lopez: Lopez technically knew how to hit his rivals, and he moved very well in the ring – a hard-hitting fighter.