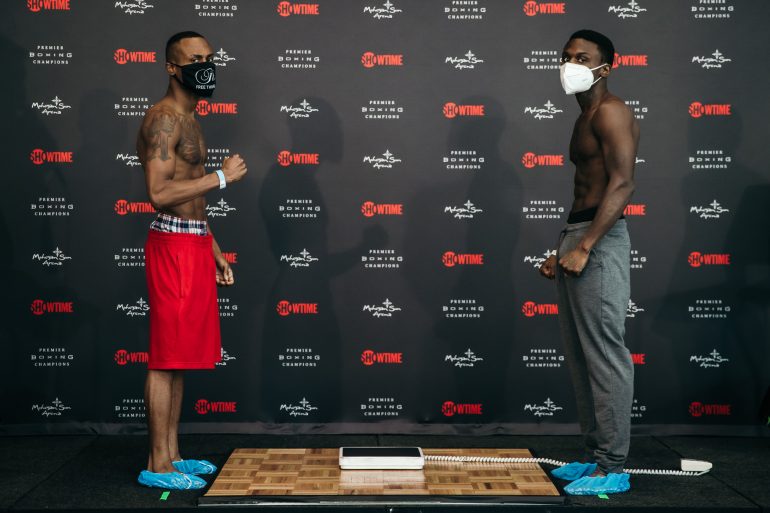 In a WBA 126-pound title eliminator, Raeese Aleem and Marcus Bates battled for the mandatory position, but it was Aleem who extinguished his fellow competitor in a lopsided showing.

The fight served as the chief support to the vacant WBO junior featherweight title bout between Angelo Leo and Tramaine Williams.

Aleem controlled the pace from the onset and stopped Bates in the 10th round in a dominating performance.

The fight was a rematch of their eight-round contest from April 2018. Like their first meeting, Aleem bullied his opponent throughout the match, but this time, he got the knockout.

The opening round was a battle between Aleem’s feints and Bates’ lateral movement.

Aleem feinted with the left halfway into the round and landed a right to Bates’ head. Both fighters then traded jabs into the center of the ring before a scintillating exchange of left hooks by both men.

Aleem’s counter left hook made the difference in the second round. With nearly a minute remaining in the frame, Aleem lunged forward and landed the lead left hook. The generally elusive Bates appeared hesitant to throw punches by the end of the round.

Both fighters threw with serious intent in round three. Aleem appeared to hurt Bates to the body with a left hook with about a minute remaining. He then knocked Bates into the ropes with a left hand. Bates then used his elbow in the clinch and was subsequently warned by the referee.

Aleem’s sustained pressure slowed Bates in round 4. He connected with a slew of lefts and rights to the body. Late in the round, Aleem stung Bates with a double left uppercut that rocked his man back.

Aleem (17-0, 11 KOs), 30, who trains in Las Vegas, and scored his sixth consecutive KO, continued to dictate the pace as the fight moved closer to the halfway mark. Bates appeared hesitant to throw punches as Aleem bobbed and weaved in the center of the ring. He backed up Bates with a triple jab and missed with a left uppercut to the body.

The sixth frame was yet another smart but aggressive one for Aleem. He baited Bates to come inside, feinted, and pulled the stutter step. Aleem drilled him with a hard right hand to the head and took the wind out of his sails with a right to the body.

At the 2:00 mark of the seventh round, Aleem backed up Bates with a quick one-two combination. It was a one-sided display as Bates continued to absorb punishment. Aleem landed lefts and rights to the head at will, including uppercuts with both hands.

Aleem connected with a stinging lead right hand to begin the eighth round. Bates traded jabs with his adversary in the middle of the ring, but he trapped himself against the ropes a short time later, absorbing a left hook to the body, and a slew of body punches.

Bates had a much better start to the ninth round, connecting with a counter left hand and a solid jab that briefly knocked Aleem back. That failed to discommode Aleem, though, who went right back to the basics.

Aleem cut off all angles of attack, leading Bates back to the ropes, popping him with the jab, and a right cross. Bates also appeared to hurt his right hand in the round, as he trembled in pain.

The end of the fight came at 2:18 in the 10th round as Aleem let his hands go with Bates against the ropes. He connected with a left hand to his elbow, and Bates immediately turned away in pain.

Aleem chased him across the ring, landing a big left hand as he retreated. Then referee Gary Rosato quickly grabbed hold of Bates to stop him from sustaining further battering.

Bates dropped his second bout in 14 appearances, all of which have come at the hands of Aleem. He had won three fights in a row before the rematch.

Prior to their battle, Aleem was the WBA No. 13 ranked contender, while Bates stood at No. 8.