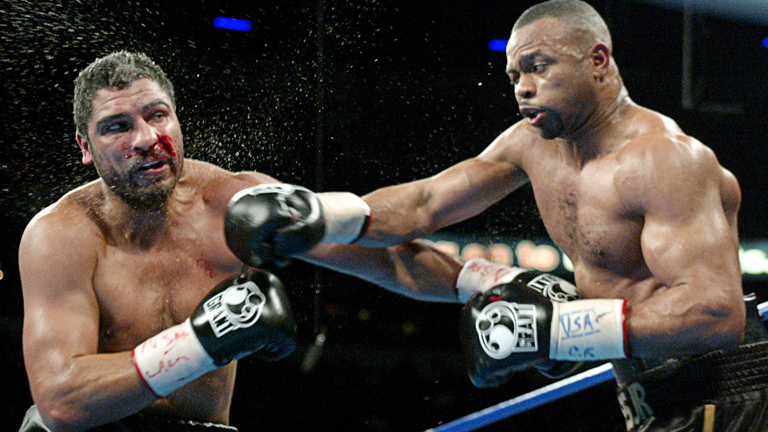 Roy Jones Jr. (right) vs. John Ruiz. He was the long-reigning P4P King at this time. He can still beat some sanctioning body-ranked cruiserweights. Photo credit: Action Images/Reuters/Steve Marcus
31
Jul
by Doug Fischer

How far down the rankings would you have to go to find a fighter that Mike Tyson or Roy Jones Jr. would have a good shot at beating?

What are some Olympic or World Amateur finals that have been rematched in the pros?

Pardon this being a dumb question, but do most boxing shows make money? Of the largest grossing fights last year, would they all be profitable once fighter earning are deducted? Regards. – Steven

It’s hard to say when the star is making crazy guaranteed money – such as post-Mike Tyson Evander Holyfield’s and Floyd Mayweather Jr.’s deals with Showtime, Manny Pacquiao’s three-bout deal with the PBC or Canelo Alvarez’s multi-fight deal with DAZN – the promoters/networks were rumored to have taken a bath on the events when the A-side was matched with a “C-side.” However, the really big boxing events that involve bona-fide attractions usually do make a profit. The record-breaking joint HBO/Showtime pay-per-view events involving Lennox Lewis vs. Mike Tyson (2002) and Mayweather vs. Pacquiao (2015) are obvious examples.

The 2017 and 2018 HBO PPV shows involving Canelo vs. Julio Cesar Chavez Jr. and Gennady Golovkin made money. (Listen to Evan Rutkoswki’s marketing breakdown of Canelo-Chavez on his Fistianados Podcast for a real education.) 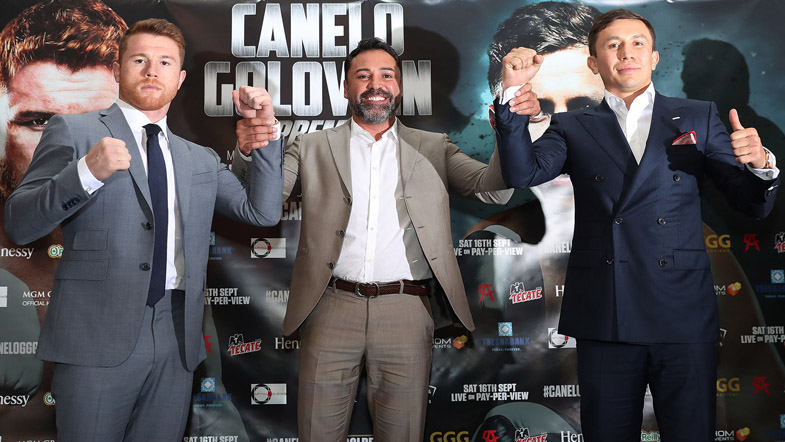 Oscar De La Hoya was one very happy promoter with his involvement in the first Canelo-GGG PPV event.

Canelo and Golovkin were guaranteed “modest” purses for the first showdown ($5 million for the Mexican star; $3 million for the Kazakh King – which obviously doesn’t include PPV percentages or their cut from foreign TV and other ancillary revenue streams). The fight garnered 1.3 million PPV buys in the U.S. and generated the third largest live gate in Nevada history – $27 million. At $75-85 a pop for the PPV, you do the math. Add in the international TV sales, major sponsors and on-site fight-week merch sales, and you better believe that everybody involved in the promotion and broadcast made money.

More recently, the Deontay Wilder-Tyson Fury rematch fell short of its lofty PPV projections, but the joint ESPN/Top Rank-FOX/PBC promotion at the very least broke even, in part thanks to a Nevada live gate record for a  heavyweight bout with almost $17 million in ticket sales.

Going forward, it might be difficult for major events to turn a profit given star fighters’ high purse demands and the lack of ticket-buying audience.

How far down the rankings would you have to go to find a fighter that Mike Tyson or Roy Jones Jr. would have a good shot at beating? I wouldn’t favor Tyson to beat any heavyweight in The Ring’s top 10 rankings, and the same goes for Jones vs. any of The Ring’s cruiserweight top 10.

Looking at the sanctioning body rankings, I can go down to No. 15 in each of the four major belts and I still have a hard time envisioning Tyson beating Otto Wallin (IBF), Fillip Hrgovic (WBO), Agit Kabayel (WBC) and event 47-year-old Fres Oquendo, who for some reason is in the WBA’s rankings despite his last bout being in 2014.

My guess is we’d have to delve past the Top 15, probably even the Top 20, of the sanctioning organizations to find beatable opponents for Mike.

As for Jones, maybe we don’t have to drop below the Top 15 of the cruiserweight division (where he’s fought since 2011). I would favor 15th-ranked Andrew Tabiti (WBO) and 49-year-old Firat Arslan (IBF) over RJJ. However, I think even the 51-year-old version of Jones can beat the painfully raw Zhaoxin Zhang (8-1-1), No. 15 in the WBA (which really gives no Fs), and Herre Lofidi (14-3), the WBC’s No. 15 who has suffered two first-round stoppage losses. I know Jones is fighting on muscle memory at this point but look up Zhang’s and Lofidi’s bouts on YouTube. World beaters they are not.

What are some Olympic or World Amateur finals that have been rematched in the pros? I can only think of two examples – both in the heavyweight division: Inaugural WBO titleholder Francesco Damiani, who stopped Tyrell Biggs in five rounds in his 23rd pro bout, but lost to the American in the finals of the 1982 World Amateur Championships and 1984 Olympic Games; and Wladimir Klitschko’s first-round blowout of Paea Wolfgramm in his 33rd pro bout. Klitschko beat Wolfgramm in the 201-pound finals of the 1996 Olympic Games.

I’m sure there are other examples (I’m leaving out Vasilily Lomachenko’s World Series of Boxing rematch with Albert Selimov, the only man to beat the Ukrainian wizard in the amateurs – in the 2007 WAC finals – because the WSoB is semi-pro), but they’ve got to be rare, especially prior to the 1990s because Cuba, Poland, Bulgaria, Hungary and all of those Eastern European and Central Asian national that were part of the U.S.S.R. didn’t turn pro back then.

Also, if you can recall, how did you score the first and second Frazier fights? Thanks! Love the mailbag. – Brandon from ATL

I don’t think I ever did. I guess that’s something for me to do when I’ve got time to kill. Maybe during this summer’s family vacation. But, as competitive as those bout were, it looked clear to me that Frazier deserved the decision in their epic first encounter and Ali earned the nod in the rematch. 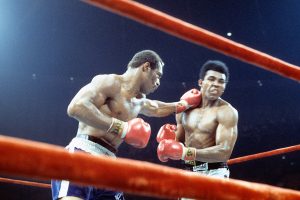 Ali definitely got a gift with the Norton rubber match. More than a few longtime boxing heads (all of whom I respect) believe that Ali was lucky to get the split decision in the rematch with Norton. That’s a fight I have scored, and I believe that Ali legitimately edged Norton. But it was close.

Ali also received a gift decision with his title defense against Jimmy Young (in 1976, the same year the third bout with Norton took place). Young, as skilled, crafty and cagey as they come, soundly outlanded Ali in every category over 15 rounds. Read this book excerpt from Muhammad Ali: By the Numbers by the CompuBox team of Bob Canobbio and Lee Groves.

The Ring’s 1963 Fight of the Year, a 10-rounder between a still-green-but-top-rated Cassius Clay and the undersized-but-battle-tested Doug Jones (ranked at light heavyweight and heavyweight), won by Ali, was a nip-and-tuck scrap from start to finish. More than a few observers thought Jones (who was often the aggressor, but also boxed well in spots) deserved the nod.

Even the folks who thought “the Louisville Lip” beat Jones fair and square gave him NO shot at dethroning the reigning heavyweight champ at the time, Sonny Liston, based on that performance. And yet, Clay was just one fight away from shocking the world.

So, is this the correct email to complain about getting sent a XXXL Maxboxing shirt when I wanted a medium over a decade ago?

On a another note RIP Naazim Richardson, “swim without getting wet” has to be my favorite direction I ever heard given in the corner. I’m curious why he wasn’t in the corner of more fighters, was he too tough a trainer or was he particular with who he worked with?

I’m a little behind on the fights so I’ve been binging to catch up and just have to stay WTF!!!!! Did they really stop a round in mid action to discuss whether it was a knockdown or a slip?? Not a quick one either an almost 5 minute stop? Do they know they have rest periods between rounds to talk to the ref and have to the end of the fight to fix it? I’m asking seriously since I remember during Pacquiao-Marquez I the judges didn’t know they were supposed to count EVERY knockdown.

Since when did the WBO become a top belt? Turning into my father, this is pretty much what he said about the IBF forever ago.

Had the color line never been a thing who do you think would be added and subtracted from the current list of heavyweight champions?

How would Harry Wills, Bill Tate and George Godfrey stack up with some modern-ish heavyweight greats in the ring? Whomever you feel like choosing.

Just want to shout out Sam (kick your ass no matter how big) Langford and Ken Norton for being bad asses.

Thanks for doing the mailbag, I need this fix in my life. – Edwin

It’s my pleasure, Edwin. And if I had any spare medium MaxBoxing T-shirts around here, I’d mail ’em to ya.

Speaking of T-shirts, who wouldn’t want one with a fight-posing Langford on it with the words “Kick your ass no matter how big” under him or across the back? Or give me one that reads: Ken “Jaw-Breaker” Norton/1973.

How would Wills, Tate and Godfrey stack up with “modern-ish” heavyweight greats? I think they’d at least hold their own vs. Rocky Marciano, Ezzard Charles or even Joe Louis. I think they could beat the likes of James Braddock and Floyd Patterson.

Had the color line never been a thing who do you think would be added and subtracted from the current list of heavyweight champions? I think Wills and Godfrey could be added. Wills sometime in the mid-to-late 1910s, maybe the early 1920s. Godfrey might have fit in the mid-to-late 1920s, perhaps the early 1930s. I’m not sure they would have replaced anybody in the heavyweight title lineage. Maybe Wills would have replaced/pushed out Jess Willard. I think he and Jack Dempsey would have traded the title at least once. I don’t think Godfrey pushes out anyone, but rather works in with Dempsey, Gene Tunney, Max Schmeling and Jack Sharkey (who beat him in 1926).

On a another note RIP Naazim Richerdson, “swim without getting wet” has to be my favorite direction I ever heard given in the corner. I’m curious why he wasn’t in the corner of more fighters, was he too tough a trainer or was he particular with who he worked with? Nah, Brother Naazim was cool with everybody. During his younger years, while serving as an understudy to Bouie Fisher, he had his hands full with his “Concrete Jungle” amateur team, headed up by his twin sons Rock and Tiger, and his nephew Karl Dargan. Those three were national and international-class standouts. Rock earned a spot on the 2004 U.S. Olympic team. Dargan won the 2007 Pan-Am Games. Both were pro prospects, trained by Naazim, during the late 2000s/early 2010s. Still, Richardson was head trainer for two hall of famers – Bernard Hopkins and Shane Mosley – as well as former cruiserweight champ Steve Cunningham and heavyweight fringe contender Travis Kauffman. There are others, and there would have been more if not for a near-fatal stroke suffered in 2007. His health was shaky going forward and he had been in very poor condition in recent years.

Did they really stop a round in mid action to discuss whether it was a knockdown or a slip?? Not a quick one either an almost 5 minute stop? Do they know they have rest periods between rounds to talk to the ref and have to the end of the fight to fix it? Hey, what’s the point of a commission having instant replay if they can’t show off with it on national TV?

Turning into my father, this is pretty much what he said about the IBF forever ago. Could you blame him?

Hope you and yours are doing fine.

It depends on what you favor more. Mayweather had the edge in technique and defensive savvy. Jones had the edge in talent and athleticism. Both were supremely skilled as amateurs and pros. They both faced and beat their share of fellow future hall of famers. Both defined their eras. (Both garnered legions of insufferable nut-hugging fans.)

Email Fischer at [email protected]. Follow him on Twitter and IG at @dougiefischer, and join him, Tom Loeffler, Coach Schwartz and friends via Tom’s Instagram Live every Sunday.