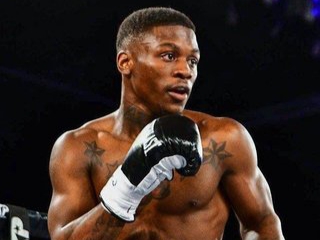 For the last two years, Marcus Bates has desired to avenge the one blemish on his resume.

But thanks to a shakeup Wednesday afternoon after fellow junior featherweight Stephen Fulton Jr. came down with COVID-19, Bates will have that opportunity as a late replacement.

But the stakes are much higher this time around.

For the second time in four fights, Bates will square off against unbeaten Raeese Aleem with the winner earning a mandatory shot at the WBA “regular” title. They meet August 1 at Mohegan Sun Arena in Uncasville, Connecticut, in a Showtime-televised chief support bout.

“I’ve been working hard to get where I’m at and everybody who boxes dreams of being a world champion,” Bates told The Ring via Zoom Thursday afternoon. “For this to fall into place at this point of my career, I think it’s perfect timing.”

Aleem outpointed Bates over eight-rounds in an April 2018 fight in Philadelphia.

Bates (11-1-1, 8 knockouts), 26, of Washington D.C., couldn’t have scripted it any better. He will fight on national television with not only the opportunity to avenge his first loss but also with the chance of earning a shot to accomplish his lifelong dream.

“I’m very excited to fight (Aleem),” he stated. “It’s going to be on TV, so I have to come in at my best. This is a perfect opportunity for me. If I win it, I might fight for a world title. Every boxer’s dream is to get a world title.”

Aleem (16-0, 10 KOs), 30, who fights out of Las Vegas, was due to face fellow unbeaten junior featherweight Tramaine Williams (19-0, 6 KOs) on August 1, but following Fulton’s positive COVID test, the latter was elevated to the main event to take on Angelo Leo for the vacant WBO title.

But a contingency plan was well in place before Fulton was removed from the card. Bates was told in advance to prepare to fight in case someone dropped out.

“I was just prepared to fight,” Bates said. “When I came up, the whole ride on the plane I was like, ‘I wanna fight. I hope I get to fight.'”

Bates wasn’t necessarily hoping for someone to get hurt or sick, but he was exhilarated once he received the news that he would be fighting.

“I was born to fight, and I’m getting the rematch,” he continued. “I was very excited. I was like, “Yes! Thank you!'”

Since dropping the first fight to Aleem, Bates has won three bouts consecutively.

Irregardless of the fact that those three wins came against journeymen, Bates is on the cusp of earning his first title shot. But Aleem stands in his way.

“I stay in the gym even (when I don’t) get a call to fight – I’m always in the gym; I’m always ready, and then once I get the call, I just turn it up a notch in the gym.

“I’m very prepared for this fight.”