Two years after walking out of prison, Tramaine Williams gets his title shot 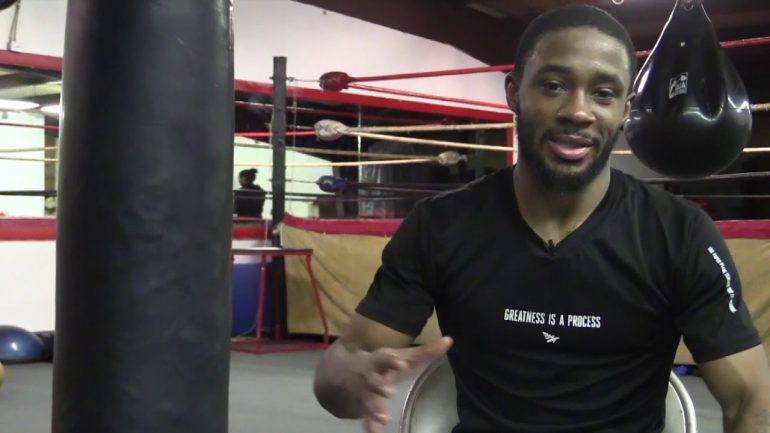 Tramaine Williams was sitting in a Connecticut penitentiary for violating his probation two years ago.

As much as the unbeaten fighter had hopes of fulfilling his boyhood dream of fighting for and winning a world title belt, doubts and uncertainty crept into his head. Would Williams waste away a promising career or could his career complete an ultimate rebound?

Williams decided to recommit himself to the sport, notching victories to put himself one win away from capturing a world title.

Williams will face Angelo Leo in a clash of unbeaten fighters for the vacant WBO junior featherweight title Saturday night at the Mohegan Sun Casino in Uncasville, Connecticut. The 12-round bout will headline a three-bout Showtime telecast (9 p.m. ET/ 6 p.m. PT).

Both Williams and Leo are fighting for the WBO title that Emanuel Navarrete vacated earlier this month after deciding to move up and campaign at 126 pounds.

Williams (19-0 1 NC, 6 knockouts), who resides in nearby New Haven, has not fought since July 27 of last year, defeating fringe contender Yenifel Vicente of the Dominican Republic by unanimous decision. Since his release from prison almost two years ago, Williams has won four fights.

Despite the last-minute change, Williams is confident he is prepared for Leo.

“I will let my coach look at the tape of Leo and he will come up with a game-plan,” Williams told The Ring Thursday afternoon. “As far as I’m concerned, you always make adjustments, if you need too, during a fight. I know Leo is a more-conventional fighter than Aleem. He’s going to come forward. I think the change of opponent is a monkey-wrench at him because he has to face a southpaw. He has to face me, which he wasn’t prepared for. I was ready to fight Fulton so I believe that will play to my advantage.”

The 27-year-old, who was an amateur standout before turning pro in April 2012, has had several brushes with the law where he paid the price of spending time incarcerated. In January 2014, two days before he was scheduled to fight at Madison Square Garden in New York City, Williams was arrested and later charged and convicted of possession of an assault weapon and possession of narcotics. He would be released later that December, but his promotional deal with Top Rank was voided.

Williams would fight on a few CBS Sports Network telecasts, ultimately signing a promotional deal with Roc Nation. His last fight against Vicente was on a Matchroom Boxing USA card, but Williams has also fought on club shows on the East Coast.

Even with years incarcerated, Williams did what he could to stay active in the ring.

“If I had it my way, I would be fighting three, four, or five times a year,” said Williams, who goes by the nickname ‘Mighty Midget.’ “Boxing has been an escape for me. It’s an escape for my anxiety. It’s an ultimate escape and a way to search for love that I didn’t have growing up.”

“When I look back at all these predicaments I’ve been in, maybe I had to go through all of this to really find myself. I don’t know how other fighters or other people would react in the same situation and I’m not justifying what I did was right, but I stayed true to my roots and my goals despite all I went through.”

Williams had campaigned briefly as a featherweight before deciding to fully commit himself to fight at 122 pounds. One fighter who he had hopes of fighting is WBC featherweight titleholder Gary Russell, Jr.

Despite the different weight classes, Williams does still hold out hope a fight can be made against Russell.

“I know I can beat Gary Russell, Jr. I wouldn’t have a problem moving up in weight to fight him. He’ll probably make some dumb excuse saying that I’m not worthy of fighting him. He’s already fought his one fight this year so he won’t fight again. He thinks people are scared of him, but no one is. I’ll beat him and his brother (Gary Antonio Russell).”

As much as he desires to fight Russell, his focus is on Leo. Despite being incarcerated and losing out on his promotional contract with Top Rank, winning a world title Saturday night would be the ultimate comeback.

It would be a surreal moment for Williams should he come out victorious Saturday.

“After all the preparations over the last couple of weeks, I can’t wait to go in there Saturday and follow through on my game-plan. This is a dream I’ve had since I has nine years old. Even with all I’ve been through, I’ve never let go of that dream of fighting for a world title belt.”