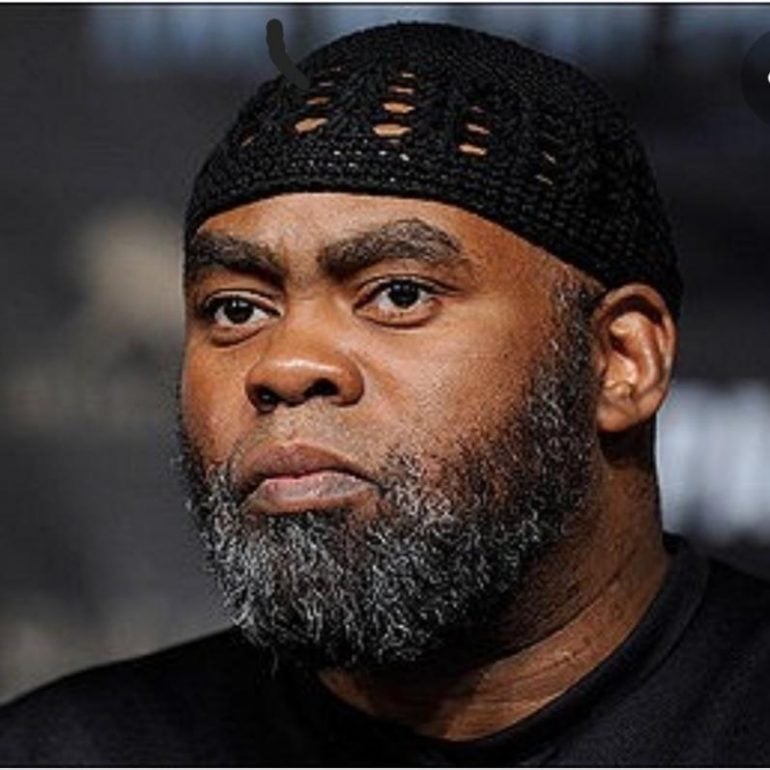 News spread quickly Friday morning. It didn’t matter who you were in the boxing community, how many titles you won, or if you were a mask-wearing 10-year-old pounding a heavybag for the first time in a dimly lit West Philadelphia gym, or sitting in a mansion looking up at old, dusty boxing trophies.

Over the weekend, many of Philly’s current and past greats spoke about Richardson, their memories and what will resonate with them while Janazah arrangements for their friend, mentor, confidante and trainer, are made for Tuesday at 1 p.m. ET at the Savin Funeral Home in North Philadelphia (information about the funeral service is below).

From all-time great and Hall of Famer Bernard Hopkins, to past titlists like Danny “Swift” Garcia, Steve “USS” Cunningham, Julian “J-Rock” Williams, and fighters like Stephen “Scooter” Fulton, Travis Kauffman and Karl “Dynamite” Dargan, whom he coached at the Concrete Jungle Gym in North Philadelphia, all chimed in on the legacy by Richardson, who at 55 died on Friday morning after a long illness.

Hopkins had a few hard days after Richardson’s death. He said he was in an emotional airport. Richardson had worked Hopkins’ corner throughout much of his career, working under another great Philadelphia training legend, English “Bouie” Fisher. When Hopkins and Fisher had a falling out in 2006, Richardson took over as Hopkins’ lead trainer.

“I think Naazim’s legacy is going to be one of memorable moments with a lot of people, and I witnessed many of them,” Hopkins said. “I normally don’t get emotional, but I did when I heard this.

“People forget how great a strategist Naazim was. Naazim became Bouie’s strategist and he became Bouie’s youth when Bouie became older and couldn’t do certain things. Naazim and I would go over tapes and develop strategies, and even now when I’m watching fights, I see things because of Naazim and how he helped me see strategies play out. He made sure he was on every little thing—from handwraps to every little detail got done. The world saw it.

“We saw it in my fight with Felix Trinidad and we saw it with Shane Mosley’s fight with (Antonio) Margarito. What Naazim did in the game of boxing and in life, Muhammad Ali was known for his famous quotes, but when you hear ‘Swim but don’t get wet,’ we all know that’s Naazim Richardson.

“It hurts. I’ll miss him. He was a great man—and a great teacher.”

What resonates with Garcia, Cunningham, Williams, Kauffman, Fulton and Dargan, everyone from the Philly boxing community, is his faith in their ability.

“This is sad, really sad,” Garcia said. “I knew Naazim when I was a kid. I used to go to Champ’s Gym when I was nine, 10 years old. I will always remember Naazim as a great person and someone who believed in everyone.

After Garcia won a national tournament in 2004, there was Richardson at ringside screaming like a crazy uncle to Swift, “I told you, I told you would get one.”

And like almost everyone in the Philly boxing community, Kauffman started like Garcia, “I knew Naazim since I was a little kid.”

“Naazim always had this positive demeanor and when he talked, you heard him,” Kauffman said. “I remember my very first PAL nationals in Augusta, Georgia, all I can hear is, ‘Champ, you have to swim without getting wet.’ I didn’t even hear my father (Marshall), who was working my corner. I would always hear brother Naazim.

“How could you miss him?”

Kauffman laughed about some of Naazim’s sayings, like his most-famous, ‘Swim and don’t get wet,’ or ‘I’m holding on with both hands,’ ‘Stick somebody with a knife, you don’t have to pull your .22 if you don’t have to,’ ‘Pop the chain,’ ‘Swipe the nose,’ ‘Disappear in front of him,’ ‘Cash the check.’

Cunningham last saw Richardson on Friday, January 17 at Mercy Fitzgerald Hospital in Darby, Pennsylvania, prior to working ringside for the Williams-Jeison Rosario FOX broadcast in Philly.

Richardson had been in poor health for about 10 months, suffering a series of strokes. There were a few times, Cunningham said, that they were going to administer last rites.

In October 2019, Cunningham and his wife, Livvy, visited Richardson, who was supposed to be brain dead.

A Filipino chaplain came in to see Richardson, even though he was a practicing Muslim. The chaplain spoke in a quick, staccato way.

“The chaplain literally sounded like Manny Pacquiao,” Cunningham recalled. “They told us Naazim was brain dead in October, even though he could squeeze my hand and gave us nods. It was hard to see him that way.

“We know brother Naazim. He’s a fighter. He willed himself to walk after his strokes. Naazim had this thing where he would escape hospitals. They had to place a 24-hour nurse with him.

“Well, the chaplain spoke to brother Naazim for a few minutes, and when he left, I told Naazim, ‘Hey, brother Naazim they sent Manny Pacquiao to check up on you,’ and he let out this big belly laugh.”

The hospital room was filled with laughter for the next five minutes.

Cunningham has many Richardson stories. When they were in camp together, people would always address Richardson as a legend—and he didn’t want to hear that. He still felt he had work to do.

“I think what I’ll remember the most about brother Naazim is he loved everyone—I mean everyone,” Cunningham said. “I wish I was like him. I wish we were all like him. I find myself trying to hold myself up to high bar.

“I saw Naazim gives props to people we all knew hated him—if that’s even possible for anyone to hate him. But he did. We all knew some guys would back bite him on social media, or talk to some guys in the gym about him, and he knew, too. I saw Naazim walk up to these guys and give them their props to their face.

“He would never allow anyone to knock a fighter. You better not do it in front of him. He willed himself to never say anything bad about anyone. That right there is someone I would like to evolve into and be like.

“He’s someone we should all strive to be like.”

Williams met Richardson when he was 13. J-Rock actually knew about him before they met, as an avid Hopkins’ fan.

In September 2013, Williams was going up against Hugo Centeno Jr. in a career-defining fight. Williams’ mother, June, had died of heart failure at 53 on August 2013, a month before.

“I was emotional and Naazim called me and said one important thing that I still remember,” J-Rock recalled. “He told me that I couldn’t go into the fight and try to win it for my mom. I really didn’t understand that. Then he said I couldn’t fight off of emotion. I had to do it for me, stay sharp and stay focused.

Richardson was there when Jermall Charlo stopped Williams in five in December 2016. And he was there the night Williams beat Jarrett Hurd for unified junior middleweight titles in May 2019 in Fairfax, Virginia.

Richardson was the last one to leave Williams’ dressing room that night.

“Naazim believed in all of us,” Williams said. “He was a special person. He could walk into a room and touch everyone in some way, if you were a stranger or not. When he spoke in the gym, everyone stopped and listened.”

Dargan was extremely close with Richardson. He saw him endure his health issues. On Friday morning in Miami, Florida, he got the news and immediately took a flight back to Philadelphia to be with Richardson’s family.

“There was a time when I didn’t want to fight anymore, when my cousins, Rock and Tiger Allen, and my brother stopped fighting,” Dargan said. “I grew up with all of them. I felt like I was alone all of a sudden. Naazim would tell me if I wasn’t having fun while handing business, I shouldn’t do it.

Fulton visited Richardson recently in the hospital. He received a bunch of calls Friday morning when Richardson passed away.

“There’s never going to be another one like him.”

From Joseph Santoliquito: “On a special note, I, too, was affected by the death of Naazim Richardson. I’ve been immersed in the Philadelphia boxing community for over two decades and have been fortunate to have very special people in my life from that family. I don’t think I’ve ever come across, nor will ever come across a more accepting, more generous teacher, mentor, father and trainer in my life than Naazim. He was a special man who held no hate in his heart. He was one of a kind.”

ALL WHO ATTEND MUST WEAR FACE COVERING!!

Any Proceeds or Donations will be handled by Mr. Wayne Allen  215-219-9275 for info receipts will be available as well for any proceeds for documentation.