David Benavidez sounds off on frustration with not landing big fights 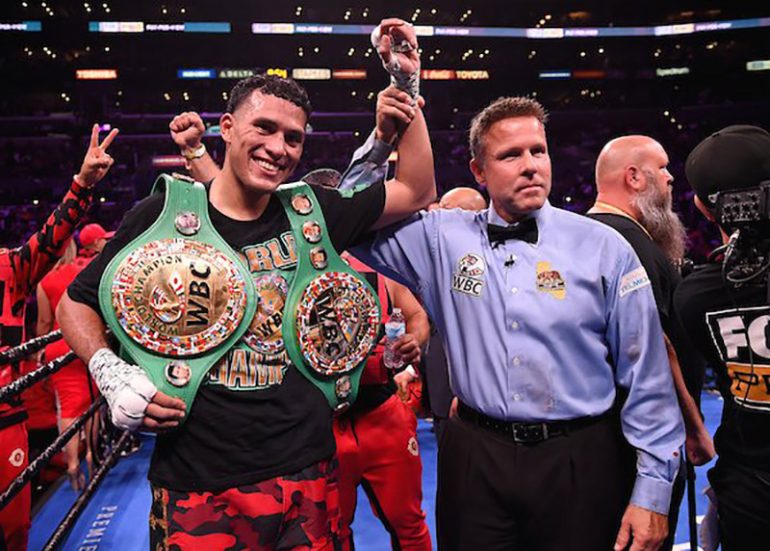 David Benavidez (left) is draped with belts after his ninth round knockout of Anthony Dirrell. (Photo by Frank Micelotta/Fox Sports/PictureGroup)
25
Jul
by Ryan O'Hara

Undefeated WBC super middleweight titleholder David Benavidez once felt that 2020 was going to be the year he landed his first significant fight.

However the COVID-19 pandemic all but shattered his illusions of that possibility, which has left the 23-year-old feeling slightly disappointed yet optimistic of the future.

“It was a little frustrating (at the beginning),” Benavidez said. “I felt like I was already on my way to getting these big fights (this year) but obviously this slowed everything down but it’s probably for the best.”

Despite being unbeaten, Benavidez is a two-time WBC 168-pound titlist. He first won the vacant title with a split decision over Ronald Gavril in September 2017, despite getting dropped in the final round. He then defended the title in a subsequent rematch against Gavril in February 2018, dominating the Romanian from the opening bell en route to a unanimous decision victory.

However in August 2018, Benavidez tested positive for cocaine in a random urine test conducted by the Voluntary Anti-Doping Association (VADA) as part of the WBC Clean Boxing Program. As a result, he was stripped of the belt, thus allowing Anthony Dirrell a shot at the vacant title in February 2019 against Avni Yildirim, a bout which he won by ninth round technical decision.

Benavidez (22-0, 19 knockouts), of Phoenix, Arizona, the younger brother of former contender Jose Benavidez Jr., knocked out J’Leon Love in two rounds, in March 2019, in Texas. Benavidez then regained the WBC title by scoring a ninth round knockout of Dirrell last September on the undercard of the Errol Spence Jr.-Shawn Porter welterweight unification bout in Los Angeles.

The 23-year-old Benavidez will make the first defense of his second reign on August 15 when he faces Alexis Angulo in a Showtime-televised main event from the Mohegan Sun Arena, in Uncasville, Connecticut.

But Benavidez’s struggle of getting the fights he wants is evocative of other top performers in the sport and, in particular, those at 168 pounds. At super middleweight, you have The Ring Magazine champion Callum Smith, superstar Canelo Alvarez, IBF titlist Caleb Plant and Benavidez.

While Smith and Alvarez may meet later this year, it doesn’t appear that Plant vs. Benavidez will be on the horizon for quite some time. However that hasn’t stopped Benavidez from bringing it up.

“Hopefully (in 2021), I can get a fight with Caleb Plant,” he stated. “It’s definitely a fight I want and I feel like it’s a fight fans want.

Plant (20-0, 12 KOs), 28, a Nashville native training out of Las Vegas, has not blamed Benavidez for the holdup but he did point the finger at his team. 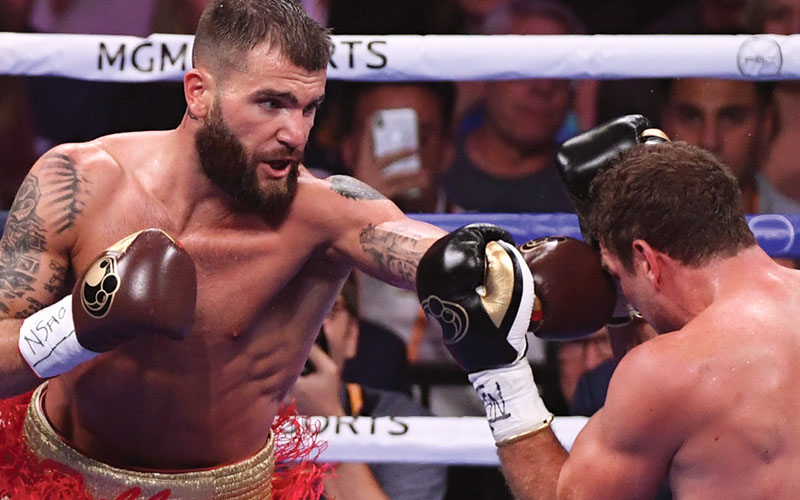 LAS VEGAS, NEVADA – JULY 20: Caleb Plant (left) throws a left at Mike Lee in the third round of their IBF super middleweight title fight at MGM Grand Garden Arena on July 20, 2019 in Las Vegas, Nevada. Plant retained his title with a third round TKO. (Photo by Ethan Miller/Getty Images)

“The reason there is a holdup on this (Benavidez) fight is not because of me. Their team has said they don’t want that fight right now. It doesn’t matter how bad I want the fight to happen. It takes two to dance and I can’t force anybody’s hand in there with me. Until they have a change of heart, it will be a whole bunch of wishing; I guess,” Plant told BoxingScene in June.

Since outpointing Jose Uzcategui to lift the IBF title in January 2019, Plant has made two defenses, a third round TKO of previously unbeaten Mike Lee, in July of last year, and a 10th round stoppage of Vincent Feigenbutz last February in a hometown defense.