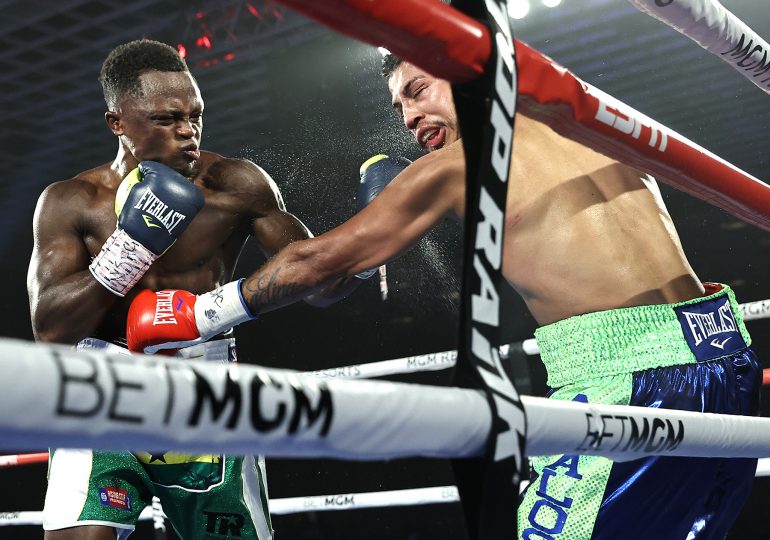 With the victory, Dogboe improves to 21-2, 15 knockouts

The knockout over Avalos marked Dogboe’s first victory since back-to-back losses to Emanuel Navarrete, the most recent occurring on May 11 of last year.

Avalos, a two-time world title challenger at 122 pounds, had not fought since a loss to unbeaten Abimael Ortiz on November 30.

After an even opening two rounds, Dogboe became the more-accurate puncher between the two, varying his attack by either countering Avalos or initiating exchanges by throwing and landing combinations behind consistent jabs. With less than a minute left in round 5, Dogboe was deducted a point from referee Russell Mora for landing a low blow.

Dogboe began battering Avalos during the second half of the fight. Avalos’ punch output dropped significantly with each round and his face was bruised from the amount of punches Dogboe landed.

The 25-year-old went in for the kill during the final round, closing the distance and landing hooks and crosses to the head of Avalos. With less than a minute left, a left hook to the head stunned Avalos. Moments later, Dogboe landed a sweeping right cross that hurt Avalos, prompting referee Russell Mora to step in and stop the fight at 2:25.

THAT is how you debut in the Featherweight division. ?@IsaacDogboe was on point the entire way, and ultimately stoped Chris Avalos in the 8th and final round.#ValdezVelez | LIVE NOW on ESPN pic.twitter.com/bfwbMafmmn

Tuesday night marked Dogboe’s first fight at 126 pounds and under the tutelage of trainer Barry Hunter.

“I heard his voice and he told me to take my time,” said Dogboe, who is originally from Ghana and now resides in Tampa, Florida. “I set up everything with jabs.”

Avalos, who resides in Lancaster, California, drops to 27-8, 20 KOs and has now dropped six of his last eight bouts.