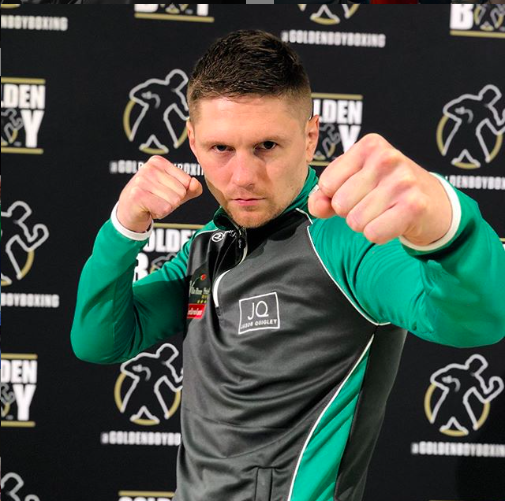 The ball is in the court of Canelo, and Sheer Sports and Jason Quigley fully get that.

Sheer, a California-based professional sports management group, has been in the boxing sphere since 2013. Ken Sheer is CEO, and the VP, ex amateur fighter Lyle Green, touched base with RING about the possibility that the Irishman Quigley could glove up with the Mexican mega-star. 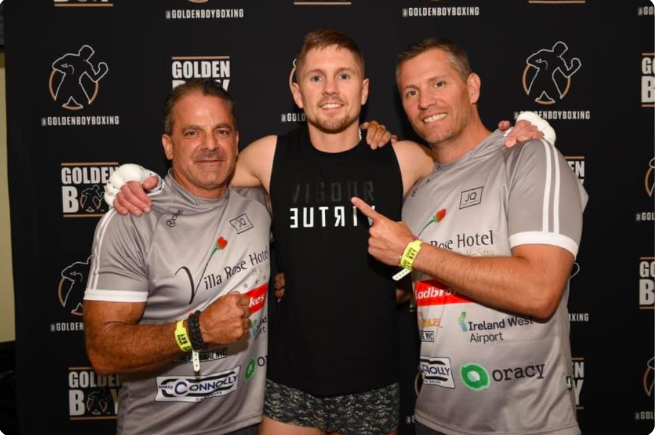 Sheer, the CEO, is left, Quigley in the middle, and VP Green on the right. The fighter says yes, damn right he’d like to battle Canelo.

I chatted with the Santa Monica resident Green on the phone Friday and we first talked about bigger picture life. I have two kids, Green has four, and we laughed about the challenges of carving out time when working from home that doesn’t get impacted by the knock on the office door of a kid wanting a PBJ, or permission to buy Robux, or what have you. Nevertheless, Green has been able to master the juggling enough to inform me that sure enough, Sheer and Quigley, rated No. 14 by the WBC at 160, would love a Canelo faceoff. Both are promoted by Golden Boy Promotions, for the record.

“In my opinion, Jason Quigley makes sense for Canelo,” Green told me. They know what the offer would look like, but no, Team Canelo and promoter Golden Boy haven’t furnished a detailed offer. It would be a fight in September, yes, but Green made clear he gets it, the atmosphere we are in is a fully different animal. Quigley and Sheer are flexible, he communicated. But the executive also offered his take as to why his kid, with an 18-1 mark, would be the best for Canelo’s next. 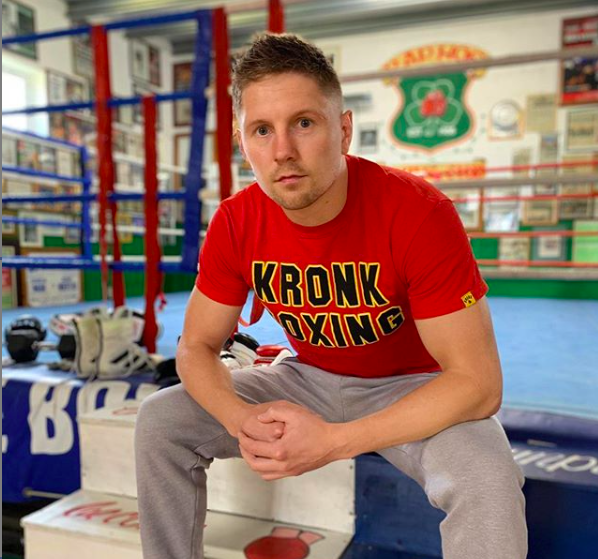 Quigley has fought his last two fights at 164 plus pounds, so he’s been edging toward 168. Also, full disclosure, the writer also likes that Quigley is wearing that Kronk shirt, and also has repped Everlast.

“Of the guys mentioned, Jason’s probably got the biggest following, he brings more to the fight,” Green said of the 29 year old who reps Laghy, Ireland, a village in County Donegal. The Irish vs Mexican rivalry will cultivate more buzz than maybe a Uk vs Mexico rumble would, he continued, “and will make for a more exciting event to watch.”

You all likely know, Canelo does his thing on the DAZN platform. And while we’ve covered boxing since mid March or so, we’ve come to realize that in a sport where things are often not set in stone until the bell rings for round one, these days pugilism is even more of a free form deal. Things change, from minute to minute. That makes planning not a fool’s errand, but it does present a new challenge. People who need the structure of certainty might be finding it harder to exist. So, more factors are in play. Budgets have been affected, because no one is being so bold as to allow for large crowds to convene to watch a prize fight. That means one stream of revenue has been wiped off the table. Not every fighter is going to want to concede to that reality, others will.

Back to Quigley–Since losing to Tureano Johnson in July 2019, Quigley rebounded with wins over Abraham Corder and Fernando Marin, both via stoppages, which are the methods of victory you like when and if he secures that Canelo opp.

“We’ve had good talks with the guys at Golden Boy,” Green continued. “It would be an exciting fight.”

I’m not inclined to disagree; no doubt the Irishman would be the underdog, but I confess, I have a bias on behalf of an Irish athlete. Is it wrong to stereotype? Arguably, but I liked the way Quigley was reaching down and fighting off the ropes against Johnson in his lone loss.

Nope, no specifics were shared by Green, he gets how this work. Canelo has A plus side leverage, and so they know they’d do the fight in September. But all plans must be made and discussed within the context of COVID. Even the best laid plans can get curve balled, so Green and company seem to be recognizing that flexibility and patience are optimal traits to possess.

“We’d know by now if we weren’t in this COVID world,” the Sheer exec said. “A lot of fighters have tested positive, so nothing is one hundred percent.”