Javier Martinez has overcome more battles than just in the ring 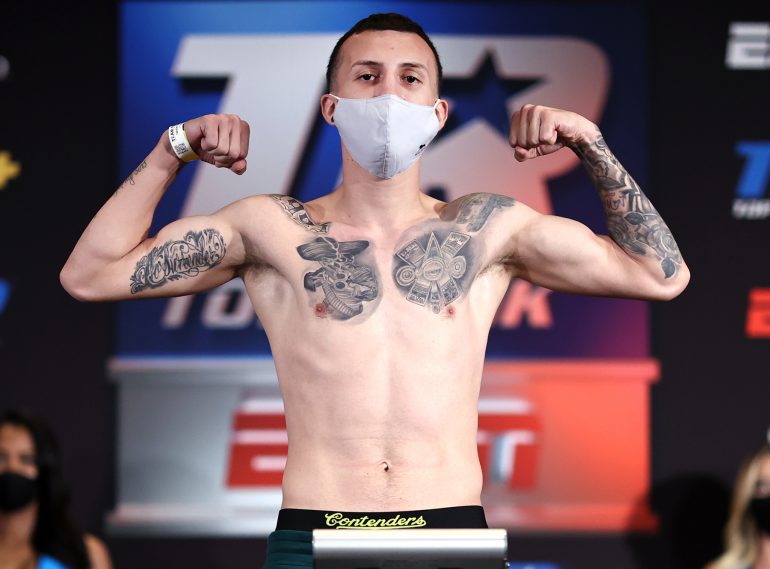 Javier Martinez never let the words eat away at his resolve. He looks in the mirror and hears their echo. They are cutting and visceral, worse than a gut punch when you’re told that you’re a piece of shit; that you’ll never be anything.

Martinez is a five-time national amateur champion. It’s a wonder the 24-year old southpaw from the south side of Milwaukee, Wisconsin, is still alive let alone boxing.

Tuesday night marks the 6-foot-1 middleweight’s pro debut, when he takes on Jonathan Burrs (2-1) in a four-round bout at 162 pounds from the MGM Grand Conference Center on Top Rank’s weekly show on ESPN.

Martinez will be carrying some unseen ammo with him into the ring—his past.

He has moved to Las Vegas. He had no other choice. Boxing got him out of Milwaukee, where upon entering his home you would be greeted by four bullet holes in the wall. He recognized the issues surrounding him. Many he knew as a kid are either dead or in prison.

Only this one comes from the home.

Around 3 a.m. one September morning when he was 14, Martinez’s home was ransacked. Javier woke up to his mother, Alicia, screaming in the living room. He ran to her and was greeted by two men in masks. One put a gun to his head. He got shoved to the ground. His mother got bashed over the skull with a crowbar, while the thieves demanded gold, which the area knew Alicia sold.

Javier tore the gold chain off his neck and threw it at them. The thieves wanted more. When Javier saw his mother’s bloody face, and one of the robbers hold a gun to his disabled brother’s head, threatening to pull the trigger, a switch set off.

“I didn’t know what to do,” Martinez remembered. “When I saw them threaten my brother, I scrambled through the house and found what they were looking for. I threw it at them and they left.”

Martinez was traumatized for 18 months after that. He couldn’t sleep, plagued by nightmares of his mother screaming in the middle of the night.

“It took me a while to get over that,” he says. “I got no help from home. The only one who ever really supported me was my father Victor. Besides him, there was no one. My mom, maybe it was her way of tough love, but she always told me how much of a piece of shit I was. I love her, and I hope she loves me. But that’s what she always called me.

“I got it from everywhere though. Everyone in my family never thought I would be anything. I had to get out and show people I could do something with boxing.”

Martinez will see more than Burrs in front of him Tuesday night. He’ll be fighting blood. He’ll see the relatives who doubted him, and someone very close whom he felt never believed in him.

“It’s why I wanted to start something new,” said Martinez, who averted gun shots during a drive-by when he was four. “Just before I left for training camp, I had someone in my family try to convince me to give up boxing, because I wouldn’t be anything.”

If he needed any more incentive to leave Milwaukee, just before Martinez went to training camp in Vegas, his house was shot up.

“It’s why I have to look at everything as a blessing, just being alive,” said Martinez, who began boxing when he was eight. “When I was younger, I’ll admit this, I wasn’t living right. I didn’t have money. I couldn’t see a future.

“I was on hostile. If someone looked at me the wrong way, I went after them. If it wasn’t for my son, I don’t know what I would be doing right now.”

Martinez, a first-generation Mexican-American, is the youngest of five boys ranging in age from 43 to 24. His parents migrated from Palos Altos, Mexico. His older brothers would take him out and fight him against other neighborhood kids like a prized pit bull. To them, it was entertaining. To Martinez, it was not. The home was raided numerous times by police.

When he was eight, his oldest brother was carted away, eventually deported to Mexico on drug charges.

When he was four, men in ski masks shot at him and his brothers in front of their house. A bullet missed him, lodging into a tree. Catching his breath, one of his brothers offered him anything he wanted, as long as he didn’t tell mom what happened.

Through those early street experiences, Martinez learned to survive. They molded him into a fighter that would become the No. 1-ranked middleweight in U.S.A. Boxing. Co-managers Tim VanNewhouse and David McWater were impressed enough to sign Martinez with Split-T Management. They in turn brokered a promotional deal with Bob Arum and Top Rank. Martinez gave away a good chance to medal in Tokyo in 2021.

“In 2016, I saw Javier was a stablemate of Luis Feliciano when they were coming out of the Olympic Trials,” VanNewhouse said. “I’ve been following Javier since. He has a fan-friendly, pressure style and he has a willingness to hurt you, which you don’t see too much in the amateurs.”

VanNewhouse and McWater considered moving Martinez to Las Vegas. It’s a major fight hub that’s affordable, and it also provides the kind of sparring Martinez can use to hone his skills.

“I see Javier on a fast-track, so he won’t be babied,” VanNewhouse said. “He’s really mature for his age, and he’s been on top of his class with USA Boxing for the last couple of years. He’s going to develop faster than a lot of kids coming out of the amateur system who are 18, 19 years old.”

“Javier is a humble kid who is disciplined,” Capetillo said. “We see him using more of his jab, and in time, he’ll understand more that the game is to punch and not get hit. We’ve been with each other for almost a year.

“I like his exciting style. He goes after his opponents. He wants to go toe-to-toe, and he isn’t afraid to go to the body. He had a pro style when he was an amateur. He has a great future. We trust Top Rank and Split-T to guide him.”

Martinez is willing to be patient. He knows he’s more than a fighter who’s been through the hardship grinder. He’s a father with a message that resonates.

“My future is my son, he’s my world and someone I will always encourage,” Martinez said. “I lived with people telling me my whole life that I’m a piece of shit. I won’t let that happen to my son. My goal is to change that cycle.