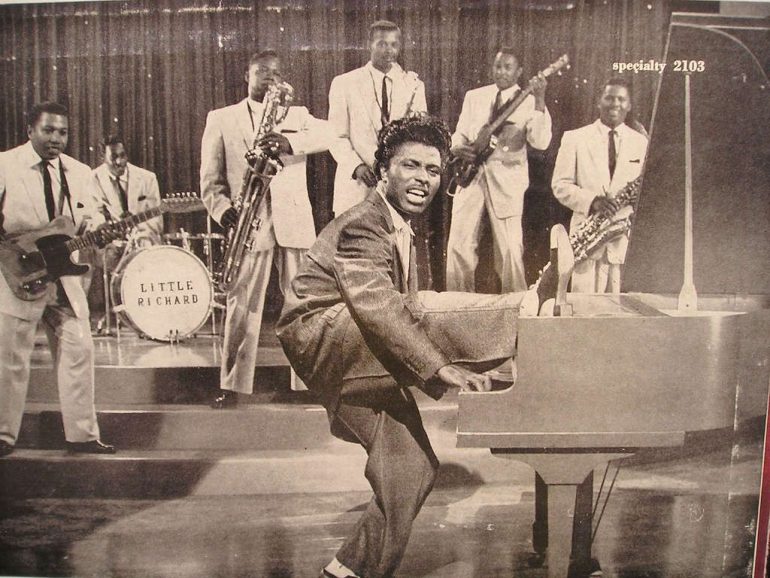 I’ve been thinking recently about Richard Penniman (better known as Little Richard) who died on May 9 at age 87.

Little Richard was born in Macon, Georgia, in 1932 and was one of the founding fathers of rock and roll. Like Muhammad Ali, he grew up black in the segregated American south. Both men were electrifying, brash, dynamic, instinctive showmen, and a lot of fun.

Unlike Ali, Little Richard wore thick pancake make-up onstage and glitter on his eyelids. His pompadour was as recognizable in his heyday as Don King’s electric hairstyle was decades later. He was flamboyant, uninhibited, and outrageous with what was sometimes described as a “gender-bending” persona. Elvis Presley seemed tame by comparison.

There were no black entertainment icons in America in the 1950s when rock and roll was changing the culture and Little Richard made his mark. He recorded his breakout hit, Tutti Frutti, in 1955. Good Golly Miss Mollie, Long Tall Sally, Rip it Up, and Lucille followed.

After his death, Jon Pareles of The New York Times wrote, “Little Richard hit American pop like a fireball, a hopped-up emissary from cultures that mainstream America barely knew. He had a spectacular presence in every public appearance: eye-popping outfits, hip-shaking bawdiness, sly banter and a wild-eyed unpredictability that was fully under his control. He had an androgynous, exultant falsetto scream. He plowed across the piano with a titanic gospel-and-boogie left hand and a right hand that hammered giant chords and then gleefully splintered them. He invented a larger-than-life role for himself. He was a challenge to 1950s proprieties: to segregation, to musical decorum, to chastity, to straightness. And his genius, beyond the music that made everybody pay attention, was to embody that challenge not as an openly angry threat or a reactive counterattack, but as pure pleasure within reach, as the joy of sheer freedom.”

Go to YouTube. Type in “Little Richard Muhammad Ali.” You’re in for a treat.

Little Richard was introduced and walked onstage. Ali rose. Muhammad loved 1950s rock and roll. It was the music of his youth. The two men embraced. Then, as Little Richard moved to the piano just in front of Ali’s seat, Muhammad pointed toward him and shouted, “The King!”

Microphone in hand, he walked back toward Muhammad, who dutifully said it louder.

Little Richard then sat at the piano, looked back at Ali, and proclaimed, “You know, I’m for real about this thing. And I love you. Happy birthday, baby. I’m in my fifties too. I know how it feels.” That was followed by an exaggerated falsetto laugh. The audience laughed with him, and Little Richard responded with a comically-timed, “Shut up!” Then he returned his attention to Ali; declared, “I could hardly wait to get out here and play this song for you;” and segued into Good Golly Miss Molly.

The day after the concert, Muhammad told me, “The best part about last night was Little Richard.”

I don’t know where Richard Penniman is right now. But wherever he is, I’d like to think that he’s not resting in peace. I imagine him rocking and rolling at a piano with Muhammad Ali is sitting in the front row.

Perhaps the worst of these experiences is the moment when a fighter knows that a fight is slipping away. And he’s not just losing; he’s getting beaten up. It’s different from a sudden knockout. It’s a inexorable progression. He knows he’s in trouble. And he knows that his opponent knows it too.

The roar of the crowd accelerates his opponent’s assault. This isn’t about being outscored. It’s not like playing tennis and being down 6-2, 5-0. It’s about being punched in the face and body. Hard. Again and again. Losing is inevitable. The fighter no longer has enough in him to turn the tide. The question is, how much more of a beating will he take.

Sometimes the fighter has a discussion with himself: “Do I really want to do this anymore tonight?”

Maybe the old Irish proverb crosses his mind: “Tis better to be a coward for a minute than dead for the rest of your life.”

Or maybe he thinks something similar to what Jimmy Cannon wrote after Carmine Vingo was bludgeoned into a coma by Rocky Marciano at Madison Square Garden seventy years ago: “Men suffer unnecessarily and endure pain because they are too proud to quit. They accept suffering because to avoid it deliberately would be a renunciation of what a fighter is supposed to be. Even pointless courage has a splendor.”

George Foreman has defied conventional wisdom and surprised people throughout his life. Winning an Olympic gold medal at the 1968 Olympics at age 19. Knocking out Joe Frazier in Jamaica to annex the heavyweight crown. Walking away from boxing at age 28 and establishing a Christian ministry. Returning to boxing ten years later and reclaiming the throne with a dramatic knockout of Michael Moorer at age 45. Making tens of millions of dollars as a spokesperson for a “lean mean grilling machine.”

With George, one can expect the unexpected. So it didn’t surprise me when I got an unexpected answer to the question: “If you could have had a long conversation with any boxer ever, who would it have been?”

“I did chat with most of my heros,” George told me. “Sugar Ray Robinson, Joe Louis, and so many more.”

So who would Foreman have chosen?

“Max Baer would have been my choice for a long conversation,”George said. “He’d throw himself so quickly into the cross arm defense. He mastered  it. Who taught it to you, Max? How long did you use it? So much to ask him. So many questions for Max Baer.”

Thomas Hauser’s email address is [email protected] His next book – Staredown: Another Year Inside Boxing  – will be published by the University of Arkansas Press this autumn. In 2004, the Boxing Writers Association of America honored Hauser with the Nat Fleischer Award for career excellence in boxing journalism. He will be inducted into the International Boxing Hall of Fame with the Class of 2020.