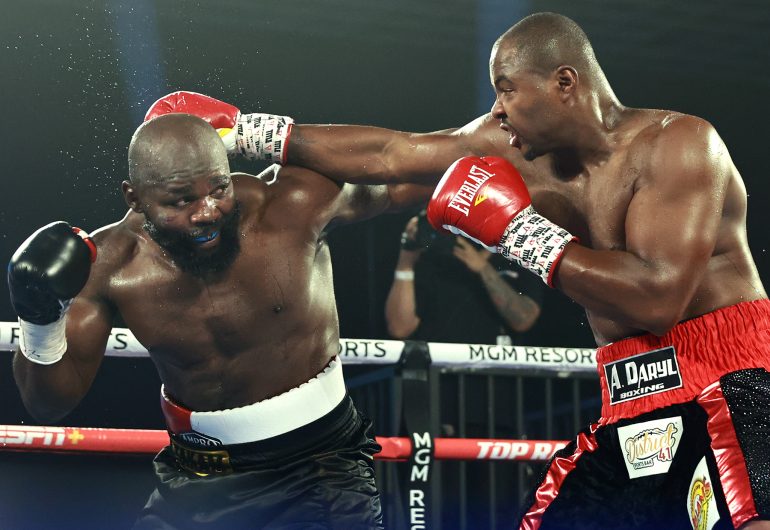 Carlos Takam battled through a bad cut around his right eye to outpoint Jerry Forrest over 10 rounds on Tuesday, but his career lives on.

The 39-year-old Cameroonian heavyweight won by unanimous decision on all three scorecards.

Judge Max DeLuca submitted a score of 96-94, while Dave Moretti had it 98-92, and Patricia Morse Jarman scored it 97-93 – all for Takam, who improved his winning streak to four fights.

“The preparation for this fight was not easy,” Takam said.

Takam was initially preparing to face Oscar Rivas on July 14, but the latter withdrew due to an injury. His opponent was also supposed to fight someone else, but that bout fell apart due to different reasons.

Forrest was slated to face Jarrell Miller but Miller, for the fifth time in his career, tested positive for a banned substance.

Miller (23-0-1, 20 KOs), 31, of Brooklyn, New York, tested positive for the banned substance GW1516 in a test conducted by the Voluntary Anti-Doping Association (VADA) and is facing a significant ban from the sport. 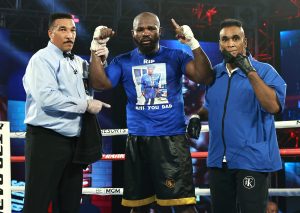 The opening round was a dull one, but things warmed up in the second round, when Takam connected with a right uppercut, followed by a straight right to the head. About a minute into the frame, Takam also connected with a lead left hook and then clipped Forrest with a left-right combo with about 30 seconds remaining.

Forrest, who was criticized by ESPN color commentator Timothy Bradley for downing a roast beef sandwich shortly before his fight, struggled to let his hands go throughout the bout. That was evident in the third round as Takam bounced on his toes and mixed things up, as Forrest tried to solve the puzzle while experiencing fatigue.

Takam nailed Forrest with a solid right cross to start the fourth round. About a minute and 15 seconds into the frame, “Slugger” Forrest continued to get out-slugged as Takam charged forward and landed a series of combos to the body.

Takam, who once challenged then-undefeated heavyweight titleholder Anthony Joshua in October 2017 in Cardiff and gave the widely popular Englishman a tough fight before suffering a 10th-round stoppage, continued to impose himself in the fifth round, connecting with a series of straight right hands. Takam was having success despite sustaining a cut around his right eye, which he pawed until the end of the bout.

Forrest failed to take advantage of the cut, allowing Takam to connect with big right hands. At the end of the frame, Forrest connected with a solid right uppercut, which got Takam’s attention.

Takam landed nearly exclusively with the straight right hand in the seventh round as Forrest managed to connect with a left hand.

Neither fighter let their hands go in round eight, as the pace steadily slowed. Takam connected with the best punch of the round, a right hand that knocked Forrest back on his toes.

Little happened in the ninth round as fatigue took over the affair. Takam worked behind his jab, while Forrest took over the inside, but did virtually nothing once he got there.

With about 1:10 left in the final round, Takam connected with a lunging straight right hand. With 50 seconds remaining, Forrest clinched and moved Takam into the ropes, and failed to capitalize. He connected with a left hand late, but it was far too late to mount a comeback.

Takam said of his future: “I want to fight Oscar Rivas or [The Ring/unified titleholder] Tyson Fury.”