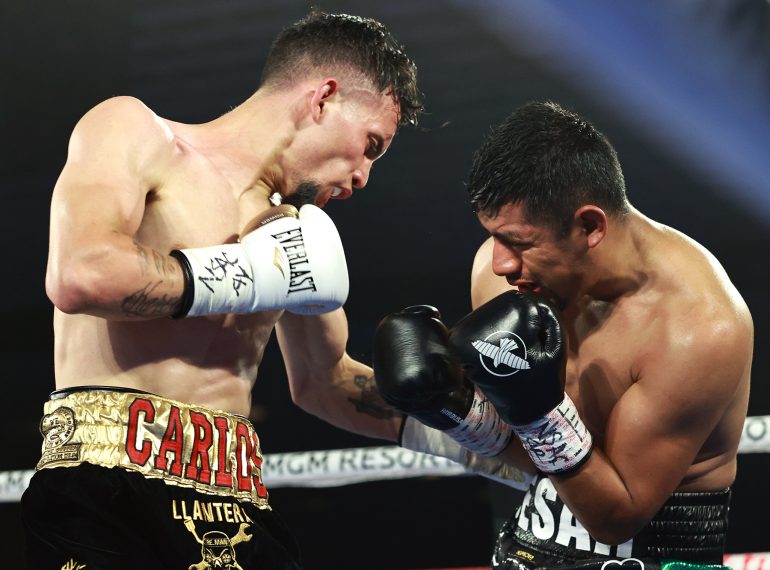 The bout served as the chief support to the 10-round Top Rank on ESPN main event between heavyweights Carlos Takam and Jerry Forrest.

“My team worked tremendously hard,” Castro said of his performance. “We saw some stuff other fighters didn’t work on him, so we capitalized on that.”

In the first round, Juarez looked for openings on the inside. He connected with a left hook to the body. Castro, a very polished boxer, worked from the outside behind his jab. Juarez was visibly hurt at the end of the round after taking a couple of hard jabs to the body.

Carlos Castro makes a big statement in stopping Cesar Juarez to improve to 26-0 (11KO). Here’s an up close look at that work.#TakamForrest | LIVE on ESPN pic.twitter.com/WOpGr7HRIK

It was more of the same in the second frame as Castro popped Juarez with the jab and connected with combinations to the body. With around :30 left in the round, Castro landed with a solid right hand to the head.

Juarez (25-9, 19 KOs), 28, who is also an attorney in his native Mexico and runs his own law firm, continued to be an open target in the third round. Castro, the father of a boy and girl, repeatedly backed up his opponent with thudding combinations to the body. At the end of the round, Juarez turned to his corner, dejected, with his head down.

Juarez fought future Hall of Famer Nonito Donaire for a vacant junior featherweight belt back in December 2015 in Puerto Rico, losing by unanimous decision. But on Tuesday, he looked nothing close to a contender.

In the fourth round, Juarez took an absolute beating. Castro battered him across the ring with thunderous combinations to the body, and a plethora of lefts and rights to the head. Referee Celestino Ruiz asked Juarez if he wanted to continue, but his corner answered the question for him, stopping the action.

Castro, who is ranked in the top 10 by three of the four major sanctioning bodies, called out WBC titleholder (and The Ring No. 1 ranked contender) Rey Vargas (34-0, 22 KOs), 29, of Mexico.

“I’m ranked No. 2 in the division,” he stated. “If I have to do a mandatory, (I’ll do whatever it takes), fight for the interim title, give me the names.

“I want Rey Vargas, whoever’s at my division, I want to be the world champion.”