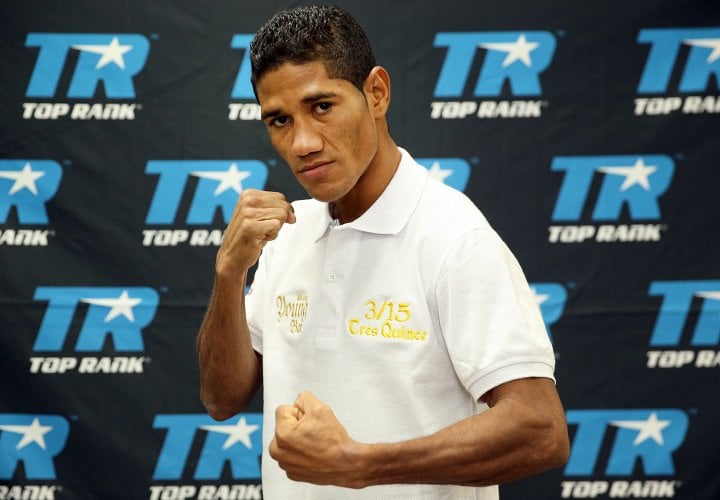 Also on the card will be lightweight Felix Verdejo squaring off against Will Madera.

Marriaga (29-3, 25 knockouts), who resides in Arjona, Colombia, was scheduled to fight WBO featherweight titleholder Shakur Stevenson on July 14 in New York City, but the card was cancelled a few days before due to the impending COVID-19 pandemic.

“Miguel stayed in shape throughout the pandemic and was willing to fight anyone we put in front of him,” said Top Rank chairman Bob Arum. “This is going to be an action-packed card, and both Miguel and Felix will be tested.”

Marriaga last fought on December 7 in Puebla, Mexico, battering Alfredo Mejia Vargas before knocking him out in round 6. He has won his last four bouts since losing to then-WBO junior lightweight titleholder Vasiliy Lomachenko in August 2017.

Despite falling short in previous fights, the 33-year-old is confident he can attain another world title shot.

“I stayed in shape during the pandemic,” said Marriaga, who made his pro debut in June 2009. “I want to be a world champion, and a win over Yap will move me one step closer to my ultimate goal. Yap is much better than his record indicates. Neither of us will take a backward step.”

Yap (30-15, 15 KOs) lost to unbeaten Angel Alejandro by unanimous decision in his last bout on November 23. The 31-year-old has lost three of his last four bouts after winning his previous 10.

Verdejo (26-1, 16 KOs), who is originally from San Juan, Puerto Rico and now lives and trains in Las Vegas, defeated Manuel Rey Rojas by unanimous decision in his last bout on January 18. He has now won his last three bouts since losing by knockout to Mexico’s Antonio Lozado in March 2018.

Despite setbacks in and out of the ring, including a motorcycle accident in August 2016, the 27-year-old believes he can follow through on fighting for and winning a world title belt.

“July 16 is a great opportunity to demonstrate the progress resulting from my work,” said Verdejo, who is now trained by Ismael Salas. “I have renewed motivation to realize my dream of becoming a world champion. That is the goal.”

Madera (15-0-3, 8 KOs), who resides in Albany, New York, stopped Mexico’s Edgar Ramirez in round 2 of his last bout on January 28. Madera’s most notable win thus far was a unanimous decision victory over prospect Thomas Mattice on February 1 of last year.

Super middleweight Raphael Igbokwe (14-2, 6 KOs) of Fresno, Texas will square off against Kosovo’s Genc Pllana (8-1-1, 4 KOs) in an eight-round bout.