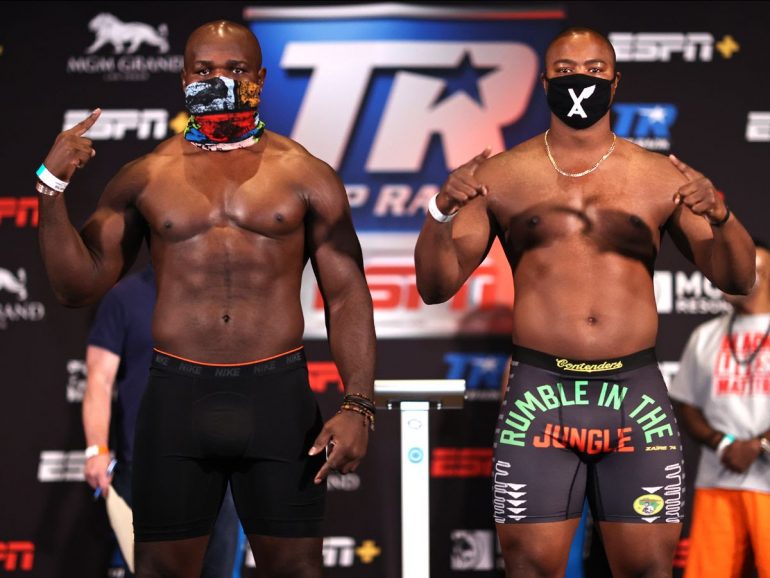 Heavyweight Carlos Takam believes he can fight again for another world title belt. An impressive victory by Jerry Forrest could elevate him into title contention.

Something has to give in this crossroads bout between Takam and Forrest Thursday night at the MGM Grand Conference Center in Las Vegas, Nevada (ESPN, 8 p.m. ET/ 5 p.m. PT).

Takam (38-5-1, 28 knockouts), who is originally from Cameroon and now resides in the Las Vegas suburb of Henderson, last fought on February 28, defeating Brazil’s Fabio Maldonado over 10 one-sided rounds. He has won his last three bouts since losing by knockout to Dereck Chisora in July 2018.

In his previous fight in October 2017, the 39-year-old was stopped by then-unbeaten and unified world titleholder Anthony Joshua. Takam is currently co-promoted by Top Rank and Star Boxing.

Forrest (26-3, 20 KOs) knocked out veteran Martez Williamson in his last bout on September 14. In his previous fight on July 12, Forrest from Newport News, Virginia lost a close split-decision to unbeaten Jermaine Franklin in a fight numerous observers that he did enough to win.

The 32-year-old is promoted by Lou DiBella.

Juarez (25-8, 19 KOs), who resides in Mexico City, was dropped multiple times before losing by knockout at the hands of unbeaten Angelo Leo in his last bout on December 29. Other notable bouts by Juarez were losses to then-WBO junior featherweight titleholder Nonito Donaire in December 2015 and Isaac Dogboe in January 2018.

Unbeaten heavyweight prospect Jared Anderson (4-0, 4 KOs) was scheduled to fight Puerto Rico’s Hector Perez (7-2, 3 KOs) in a four-round bout, but the bout was postponed at the weigh-in due to Perez withdrawing from an undisclosed medical issue. Anderson is reportedly penciled to fight on the July 21 Top Rank card in Las Vegas.

In a six-round bout between unbeaten junior lightweights, Joshafat Ortiz (7-0, 4 KOs) of Puerto Rico will square off against Springfield, Massachusetts’ Joshua Orta (6-0, 2 KOs).

Unbeaten Fred Wilson (6-0-2, 2 KOs) of Cleveland, Ohio will face Donte Stubbs (6-1, 2 KOs) in a six-round middleweight. Stubbs, who resides in Riverside, California, suffered his first loss as a pro in his last bout at the hands of Isiah Jones on June 30, which also took place at the MGM Grand Conference Center in Las Vegas.