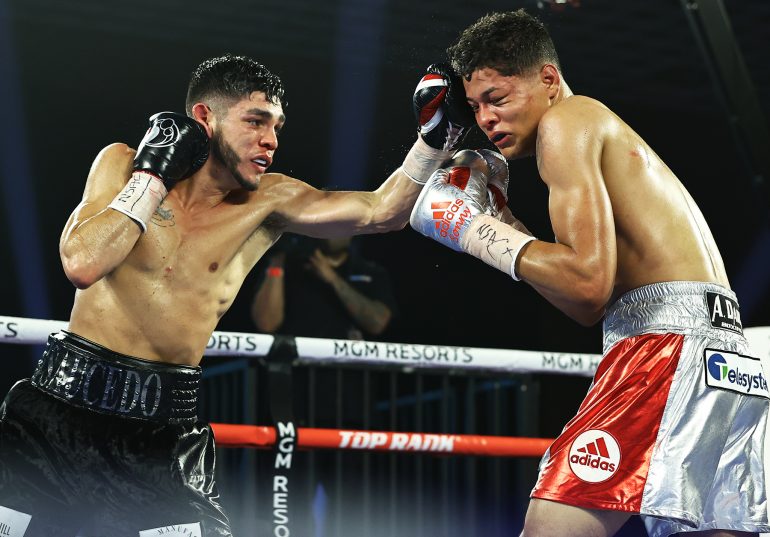 Alex Saucedo pounded out a unanimous decision victory over Sonny Fredrickson Tuesday night inside “The Bubble” at the MGM Grand in Las Vegas. It was an entertaining affair with nearly 1,500 punches traded between the battle tested junior welterweights. After ten rounds, Saucedo improved to 30-1 (19 KOs), with the judges scoring it 98-92, 99-91 and 100-90 in his favor.

When asked how he would grade his performance, the native of Chihuahua, Mexico who now calls Oklahoma City home gave himself a C+.

“I felt a little better tonight than before,” he said. “My movement was better, but I still got caught with some punches that I don’t want to get caught with. We definitely got a lot of work to do still.”

Saucedo started very fast, pushing Fredrickson back and buzzing him with a right hand toward the end of the first round. He mixed up his punches well, going upstairs and downstairs with both hands. Fredrickson was game throughout however and landed some nice counters, particularly in the middle rounds.

In the center of the ring, Fredrickson (21-3, 14 KOs), of Toledo, Ohio, more than held his own. Yet he spent too much time with his back on the ropes, where Saucedo dominated the action. The former title challenger landed 318 of 885 total punches (36%), while Fredrickson landed 172 of 584 (29%). Saucedo also scored with more than triple the amount of jabs (124 to 39) and landed 44 more body shots than his opponent.

Although Saucedo had never been past eight rounds prior to tonight, he finished strong down the stretch, clearly winning the ninth and tenth rounds. And while he has been cut in most of his recent bouts, his face held up tonight in Las Vegas. There was barely a scratch on his after ten competitive rounds.

The lone defeat in Salcedo’s career came in 2018 against Maurice Hooker. Although he dropped Hooker in second round of their WBO junior welterweight world title bout, he would be dropped and ultimately stopped in the seventh. Since then, his team has been working on strengthening his defense.