Meet Manager Luis DeCubas Jr., who was born into boxing 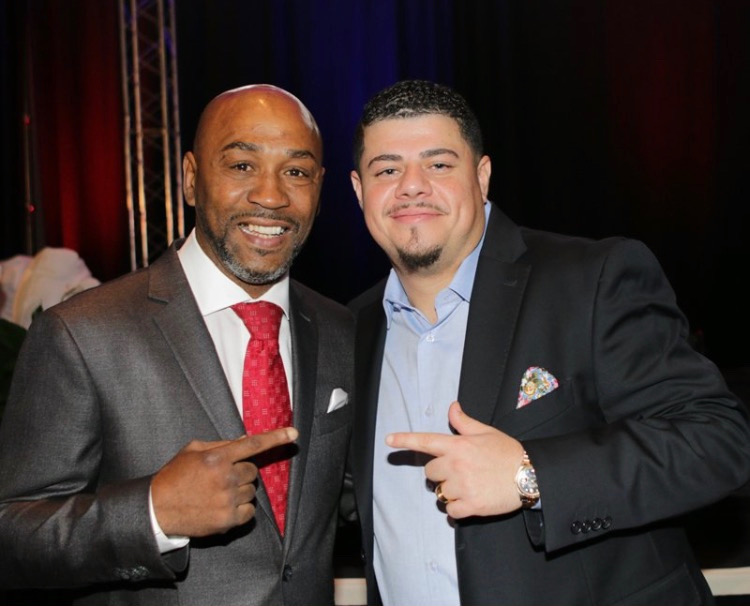 The kid seemed to know and do everything. Setting schedules, finding sparring partners, how many rounds of sparring, meal prep, conditioning, translating. Something else, too, the fighters listened to the kid. He would get an occasional sideways glance from the old codgers that didn’t know him. It didn’t faze him. His focus was always on what had to be done, followed by what had to be done next to get his fighter prepared.

Luis DeCubas Jr. never viewed boxing through the wonderment of a child’s eyes, as if it was a bouncing warm ball of light. DeCubas found himself immersed in the sport, through his father, Luis DeCubas Sr., at a very young age.

There are pictures of Luis Jr. in diapers being held by the legendary Roberto Duran.

DeCubas’ earliest recollections of boxing came when he was two. He’d sit stoic in whatever gym his father took him, undaunted by the raucous din of fighters pounding heavybags and speedbags, and the rhythmic crack the jump rope made each time it touched the tarmac.

Luis Jr. was given two directions: Keep your mouth shut, and your ears open.

He’s carried that wisdom to become one of boxing’s premier managers.

Involved in boxing for over 20 years, DeCubas has worked with close to 60 current or former champs. His association with Premier Boxing Champions and Al Haymon comprises boxing’s most powerful team.

DeCubas has arrived at this destination far more versed in boxing than any of his contemporaries.

You can say that’s because Luis DeCubas Jr., 33, was born into boxing.

His father had 23 world champions. His uncle, Ricardo DeCubas, trained Cuban heavyweight contender Jorge Luis Gonzalez. Even his mother, Samia DeCubas, was chosen the Puerto Rico Promoter of the Year in 1997. Luis Jr. once lived at the MGM Grand in Las Vegas with his dad for 18 months while Gonzalez was training for world heavyweight champ Riddick Bowe in June 1995.

“I was seven, and I remember asking my dad, ‘What are we doing out here?’ because my father took me out of school for a month,” said Luis Jr., who is the fourth oldest of six children. “I saw it then how a fighter’s team is like a family. You live and die together.

“It’s why a lot of the fighters that I have and come across through time are family to me, and boxing was never something that was going to be a hobby to me. Being involved in boxing is something that I was destined to do. I born and bred into boxing.”

Not everyone born into something embraces it.

“Yeah, I know the stories of how young kids are raised in and around certain sports. I know how some kids fight it when they get older, but they never really liked it—whether they were being raised to play the sport or raised around it. You hear stories like that all of the time.

“I was never like that. I remember sitting on a plane next to my dad going to a fight in Puerto Rico putting fights together. I thought a good matchup would be Wilfredo Rivera and Felix Trinidad in Puerto Rico would be huge.”

At 17, DeCubas was attending junior college in Tallahassee, Florida, and looking to transfer into Florida State. Luis Sr. was promoting Cuban expatriate Joel Casamayor, a 1992 Olympic bantamweight gold medalist. Luis Sr. was about to start a new company, and because of the move, he had to dissolve his contract with the former amateur star.

“I worked Casamayor’s camp for years as a little kid. I ran his camps. I packed up all of my stuff from school. Put it in my truck and drove back home to Miami. I took Casamayor and I got my father’s blessing to move forward.”

DeCubas Jr. was introduced to Casamayor and Ramon Garbey in a very unique way. They were staying with the DeCubas family—only Luis Jr. didn’t know it. He was eight at the time, when he arrived home from school greeted by two Cubans sleeping in his bedroom.

“I walk into two guys I never met before sleeping in my room, and one of them broke my closet door and I was pissed,” recalled Luis Jr., laughing. “I woke them both up yelling, ‘Who broke my door!’ They both looked up at me and went back to sleep. That’s the first time I met them. We still laugh about that.”

It didn’t take long for Casamayor to begin entrusting the kid he just met with making vital decisions in his camp. Through time, they became inseparable—as they are today.

“Luis has always been like a younger brother to me,” said Casamayor, who trains fighters and whose career deserves Hall of Fame attention. “He’s been with me since he was eight. I remember how smart he was, and I remember always telling his father, ‘When he’s old enough, I want him to be my manager.’”

Their first fight together happened to be memorable—for Casamayor. He won what many ringside believed was a controversial decision over Jose Santa Cruz on Nov. 10, 2007, at Madison Square Garden on the Miguel Cotto-Shane Mosley undercard.

“God was on our side that night. I jumped out of college to take this chance, and we got the nod,” Luis Jr. said. “That set up the (Michael) Katsidis fight, and then the fight against Juan Manuel Marquez.”

Luis Sr. took no breaks on his son. He promoted shows in Puerto Rico in 1997 and Luis Jr. did everything from take tickets, to setting up the ring, to folding the chairs after fights.

The father’s message was simple to his son: Learn what you can from boxing people. Luis Jr. would ask his father a ton of questions. He’d hit up attorney Leon Margules, Luis Sr.’s partner, for any tidbit. He was a human sponge who absorbed everything around him—and at times, even exceeding his father.

“I’m very proud of my son,” Luis Sr. said. “I’m most proud of his work ethic and how dedicated he is to his fighters. He’s always shown a great eye for talent, and he’s very intelligent. He’s so smart that he got connected with Mr. Haymon, who’s probably the smartest guy in the history of boxing.

“Luis has without a doubt exceeded everything I ever did. I’m 63 years old, and look at everything he’s done at 33. He and Mr. Haymon have made millions for their fighters. Luis really sticks up for his fighters. He knows careers are short and he’s able to maximize his fighter’s dollars.”

Luis Sr. then recalled a story that enlightened him on just how intelligent his son is.

On Sept. 13, 2008, Casamayor was outboxing Marquez—and kept boxing him at the behest of Luis Jr.

“I remember Luis telling Casamayor in his corner, ‘Keep boxing (Marquez), you’re going to win; just don’t exchange with him.’ I thought Casamayor was losing in the 10th round,” Luis Sr. recalled. “There were a lot of Mexicans in the stands and I heard them. I ran up to the ring and I’m yelling to Casamayor, ‘You better start exchanging with this guy, or you’re going to lose!’ My son was telling him to box.

The Cuban community is very tight. Many that come to America from the island nation lack the wherewithal when it comes to American culture. They rely on those that speak Spanish. Being bilingual, along with his boxing acumen, has been a huge benefit to Luis Jr.

In boxing, T-R-U-S-T is a four-letter word. Between fighters, managers, promoters, TV execs and media, no one trusts anyone. The Cuban fighters that had come to the United States to comprise Team Freedom in the 1990s landed in that tornado.

They may as well have landed on Mars than in Miami.

“Luis Sr. worked with almost everybody, and it’s easy to see where Luis Jr. gets it,” Santos said. “Luis (the son) knew what to do and how to help them—as a kid. He gained Casamayor’s trust. Luis is upfront and truthful. If Luis doesn’t like something, he’s going to let you know it.

“I think there’s a lot of jealousy he deals with, considering how successful he is at his age. Luis’ work isn’t as appreciated as it should be—in my opinion. He’s worked with Lara, Guerrero, Casamayor, and they’ve been with him and stayed with him. That’s because he treats his fighters like they’re family. His word is gold.”

Santos points out that DeCubas is always respectful. He just doesn’t play the media game.

“A lot of people in the media don’t like that,” Santos said. “Luis isn’t going to kiss anyone’s ass, especially when it comes to some media people that expect it.

“This is only the beginning for Louie. He’s put together a list of talent that is second to none.”

It’s growing and only getting better.

“I’ve been in this business for a long, long time. I don’t think I’ve ever worked with anybody better than Louie,” Santos said. “In fact, I know I haven’t. He doesn’t get the credit that he deserves. You want the mark of a great manager: No one Louie signed has ever left him.

“It’s a testament to the kind of man he is.”