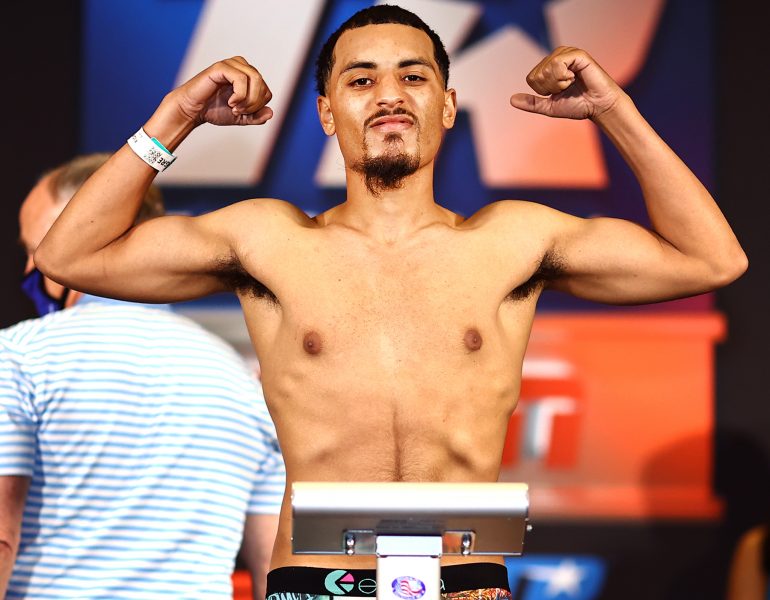 Avery Sparrow was thankful for the sweater placed strategically over his hands. Though, it didn’t matter. He could nevertheless feel the roving eyes on the back of his neck with each step in his blue sneakers, sans shoelaces.

He tried not to notice as he went by children who would tug on a parent and blatantly point in his direction.

The Philadelphia lightweight kept telling himself, ‘Just keep walking, just keep walking’ as another face turned in a seemingly endless row of heads while he was being escorted through Los Angeles International Airport last fall.

That was his nadir.

Not a month sitting in a Los Angeles county jail cell. Not having four Los Angeles police cruisers and a hovering helicopter descend on him outside of a Target store on Friday, September 13, 2019 like he just shot the president. Nor being arrested by U.S. Marshals for an outstanding bench warrant involving an April 2019 domestic dispute, when Sparrow allegedly wielded a gun after a woman threw his clothes out of a window.

No, this was Sparrow’s rock bottom, the public extradition—and humiliation—from Los Angeles to Philadelphia, Pa., where Sparrow had to walk through LAX in handcuffs and a chain around his waist.

On Monday, Sparrow, 26, boarded a plane for the first time since that painful memory.

This time, he wasn’t locked in handcuffs.

This time, his destination has landed him on national TV.

Sparrow (10-1, 3 knockouts) will try to resurrect his career Thursday night against Abraham Nova (18-0, 14 KOs) in a 10-round fight at a 132-pound contract weight on the Top Rank ESPN card from The Bubble at the MGM Grand in Las Vegas.

Sparrow took the Nova fight on a month’s notice. Thursday night will mark the first time he’ll be fighting in 13 months, since he beat Hank Lundy by 10-round majority decision last March in Philadelphia.

Sparrow was supposed to fight Ryan Garcia last September when his world came crumbling down.

“Avery was arrested on a charge I didn’t know about, and he claims he didn’t know about either, and he’s probably telling the truth,” said Hall of Famer J Russell Peltz, Sparrow’s Philly-based promoter. “Avery stays with different people and said he was never served.

“He had an argument with his former girlfriend and she threw his stuff out on the street. He got into a fistfight with friends of the girl. Avery was outnumbered, when his friends got involved. Avery supposedly yelled ‘Get the gun,’ even though there was no gun. The guys Avery and his friends were fighting ran away.”

The woman filed charges, but nothing went into action until Sparrow and his team landed in Los Angeles last September for the Garcia fight. Sparrow was locked up for a month and was never allowed to fight—until now.

Sparrow is out on bail, since his hearings keep getting postponed. The alleged gun, according to Sparrow and Peltz, has never been produced by law enforcement. The matter is on hold as the crowded court dockets play catch up through the COVID-19 pandemic.

In the meantime, Sparrow has been allowed to move forward with his life and career. He used the last four weeks to prepare for Nova. He is working to repay Golden Boy for the Garcia debacle, and part of this purse will go towards that.

It’s why this fight means far more to Sparrow than it does Nova.

Sparrow and Peltz, however, know the score. Sparrow is supposed to be offered up to the 26-year-old Nova as another notch on his resume.

But there is one glaring fact that cannot be avoided—on paper, Sparrow is a very live underdog who is the best fighter Nova will meet to date.

“He beat Jose ‘Wonder Boy’ Lopez, which Avery took on 10-days’ notice. Avery was given a month to prepare for this, and who knows what Nova has been doing with everything going on right now?”

Sparrow was with Nova when the two were in camp preparing Teofimo Lopez for Richard Commey. Sparrow says Nova is a solid fighter. But Nova is not entering this fight with as much to lose or as much to prove as Sparrow.

“I’m excited to fight again,” Sparrow said. “I’m a winner in life. I came from nothing. I was on my own when I started my boxing career. I was fighting club shows, before I was able to make some real money. I know God makes his toughest battles for his toughest people.

Sparrow felt very good going into the Garcia fight. He was out having dinner with singing star Usher Raymond. Philly movie star and comedian Kevin Hart was calling him. He was on weight and in shape when he reached the Los Angeles area.

On top of the world, he says.

Two hours later, he was at the bottom.

His face was plastered all over the news and he couldn’t go anywhere.

“The media tarnished my name and my character and they didn’t want to put me at risk, so I was put in solitary confinement the first four days in jail,” Sparrow said. “I wasn’t able to call a lawyer, I wasn’t allowed to call my family. I wasn’t able to take a shower and got minimal food.

“I was in jail for a month. But because of where I come from, and how strong I am, I was at a real low because of everyone I let down—not where I was. People believed in me and I let them down, and the opportunity I had in my hands was hard to lose.

“I was in a cage. I was treated like an animal in a cage. It was a real low. But the real low came later. I’m not a religious person, but I do believe in a Higher Power. I remember sitting down one night and saying, ‘God, if you’re real, get me the f— out of here.’”

The next morning Sparrow was told he would be extradited.

“That was the most belittling, the most horrible feeling of my life, walking through LAX in handcuffs,” Sparrow said. “That right there was the rock bottom moment of my life. I didn’t have on an orange jumper, but I had cuffs around my waist and everyone was looking at me.”

Sparrow, wearing blue sweat pants and his black A-plus brand t-shirt and hat, was thankful for the escorting officer’s small gesture of placing the sweater over his hands.

“I didn’t want to look anyone in the eye. In that situation, I was embarrassed. I felt like I was being treated like a criminal, when no one really knew about my situation. I got treated like a dog locked in a cage.”

Sparrow said he could feel himself drifting away, like he was being lifted out of his body and forced to look down at himself. He didn’t like what he saw. He stressed that kept him balanced and from losing control.

“I didn’t shed too many tears, because I wanted and needed to stay resilient,” Sparrow said. “I saw through the b——- and know that there is a bigger plan. It was good to know Usher and Russell were in my corner. Not a lot were.”

This is Sparrow’s second lease on his career. He vows he won’t squander it.

“Abraham Nova is in for a great fight, and he’s a great fighter and I appreciate Top Rank for giving me this chance,” Sparrow said. “But I can’t lose any more time.