Warning: That Jamie Foxx-Mike Tyson movie might resemble “The Irishman” 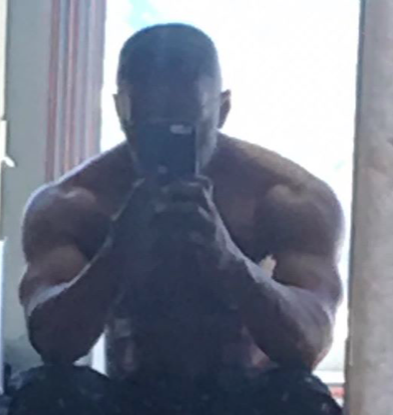 Hollywood, it could be argued, really isn’t so unlike the fight game.

For a few reasons, actually, but high atop the comparison chart is this: in both spheres, when a deal is made, it is smartest for participants (and people who are eager to consume the product) to only pop Champagne corks when the thing is done done done.

When the fighters are in the ring, and the timekeeper whacks the bell, then the promoter and production crew can breathe a sigh of relief.

Same goes for Hollywood–when you read, for example, that we are going to be seeing a Mike Tyson feature film, with Jamie Foxx playing the lead role, you are well advised to wait to celebrate until you see more than Foxx looking jacked and an optimistic IG post. 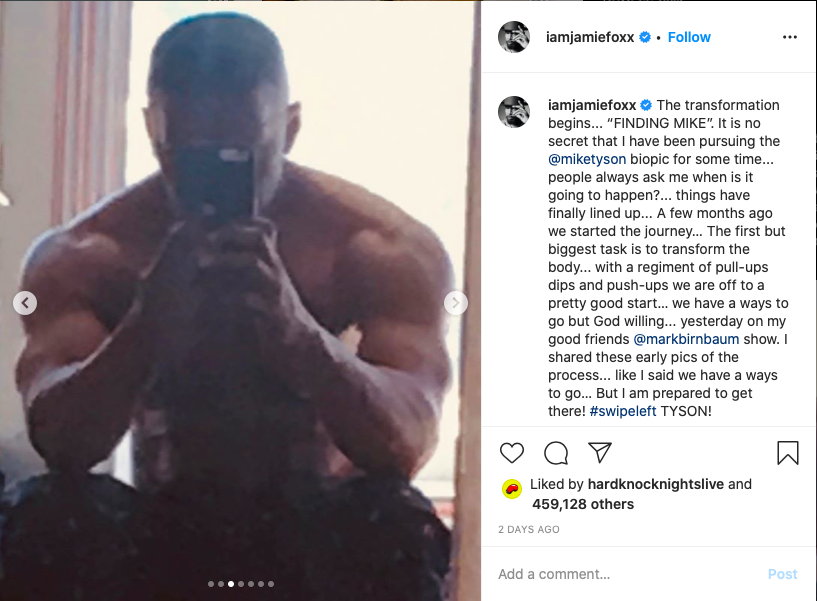 Jamie Foxx has been talking about doing a Mike Tyson movie for many, many years. And maybe we are really closer to seeing that project get off the To Do list, to the in production stage.

You maybe saw the Foxx post on Instagram (see above), referring to the actor’s hit on the June 17 edition of restaurateur Mark Birnbaum’s Instagram Live show, “Catching Up.”

If you saw that hit, you didn’t see how ripped a shirt-on Foxx looked. But you did on his June 19 Instagram post which announced that his desire to do a Mike Tyson bio-pic is “finally lined up.” Foxx knows for sure how much is left to go to hit the finish line, to start a production, but judging by his upper body, he’s already shed sweat to get his upper body into a Tyson-esque state.

Fans of the funnyman turned agile actor might already know that he does mimics voices capably, so vocally, we think the entertainer will vocally resemble the Brownsville, Brooklyn icon.

For the record, Fox is 52, and turns 53 in December. The 5-9 Texas born talent won an Oscar for playing Ray Charles, in a 2004 release. In 2008, Tyson, just three past his last fight, and, frankly, still finding his way mentally, to the rough transition out of the prizefighter container he was in, but he said he thought his guy Foxx would play him.

In the July 30th, 2014 Variety, Justin Kroll wrote that, “Jamie Foxx looks ready to get back in the ring to portray one of the most recognizable boxers and sports figures of this generation. Sources tell Variety that Foxx is attached to play Mike Tyson in an untitled biopic that Terence Winter is set to pen. Rick Yorn, who is Foxx’s manager, is shepherding the project and will produce. The package is still coming together and is currently without a studio, but once the final details are ironed out and it is presented to the market, it shouldn’t be hard to interest a distributor.”

And, now, near July 2019, the package is still coming together, with Foxx’s pecs now closer to being in “Iron Mike” form, and Tyson’s wattage higher even than he enjoyed in 2014.

The Foxx selfie flurry informing followers that he’s nearer now to ushering the Tyson story to the “big screen” (because we are assuming that coronavirus will have receded enough so that once again going to movie theaters will be a thing).

“The transformation begins… “FINDING MIKE”. It is no secret that I have been pursuing the @miketyson biopic for some time… people always ask me when is it going to happen?… things have finally lined up… A few months ago we started the journey… The first but biggest task is to transform the body… with a regiment of pull-ups dips and push-ups we are off to a pretty good start… we have a ways to go but God willing,” Foxx wrote. “I said we have a ways to go… But I am prepared to get there! #swipeleft TYSON!”

Tyson’s popularity level isn’t where it was in 1987, when “Kid Dynamite” looked out at you from newsstands, a mix of ferocity and humility, somebody you could fear, marvel at, and identify with. 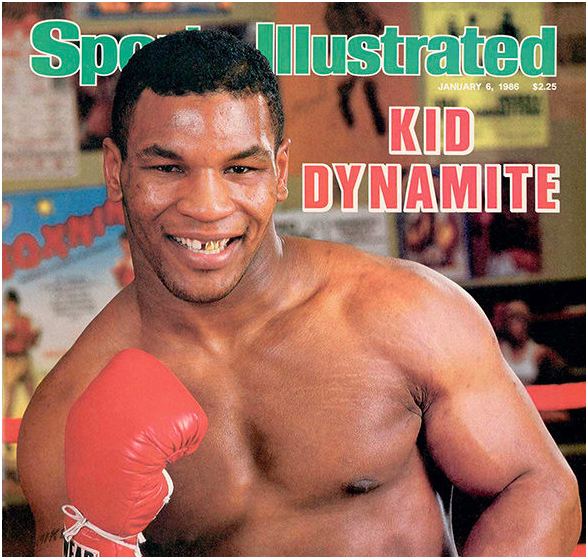 Mike Tyson had them buzzing unlike any boxer since Muhammad Ali. And he still has them entranced and intrigued by him. Jamie Foxx will attest.

But it is pretty damned stunning how the 53 year old has shown adaptability and durability as a being, money-maker and buzz driver. The one man show, the cannabis component, the podcast which wins him new fans even among people who are inclined to bring up his multiple missteps, including a stint in prison–Tyson’s profile among people 18-80 makes him a solid subject for Foxx to delve deeper into.

On May 1, Tyson shared a post by Foxx, which had them posing together, with Foxx’ inscription: “Thank u for the trust…One step closer.” 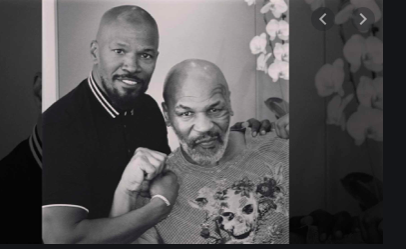 That same day, the mini clip of Tyson ripping shots on pads held by a trainer. Media took the bait, and branded the launches as “terrifying” and “explosive,” and made that snippet go viral. Could he? Would he? Might “Iron Mike,” head seemingly screwed on plenty tight as opposed to his tapdance with sanity from the later 80s, off and on, into the earlier 2000s, return to the ring and prove that at 53, he was still the top draw in the sphere?

That topic got debated heavily among the masked and unmasked masses last month.

Now, I am not so insider that I know if Tyson is being managed really well, and his PR crew is earning their keep, or if he simply has a knack for knowing what goes viral, what perks interest in media and the masses–but his effectiveness at forming a new identity, which expertly folds in elements of his old persona, cannot be refuted.

And back to Foxx; that wasn’t his born name, he changed it when he realized he could make them laugh to the extent that borrowing the last name of one of the nation’s Top Ten comedians for the ages, Red Foxx, was only a minor risk. On “In Living Color,” they scored with Tyson skits, though Keenan Ivory Wayans and David Alan Grier mostly mimicked Mike.

And with “Any Given Sunday,” he informed us that he could switch stages seamlessly. In 2001, hardcore fight fans who didn’t watch Fox comedies dug his portrayal of hype-man/mood-lifter/punching bag Bundini Brown, as a foil to Will Smith’s Muhammad Ali.

Boxing stayed in his blood, apparently. In April of 2015, he went on Hot 97, and said that he was feeling confident the Tyson flick would get made. Years passed, but that plan, that challenge spoke to Foxx; in 2013 Foxx said he craved playing Spawn or Tyson.

On the 2015 radio hit, Foxx said production would be aided by the usage of the tech that Martin Scorsese used to have Robert denier take a few decades off, and play Jimmy Hoffa’s blood-taking bud Frank Sheeran in “The Irishman.”

Oh, about that; a Scorsese rep reached out to author Charles Brandt, about securing the rights to his 2004 book “I Heard You Paint Houses,” that same year. A deal was reached in 2005, but wheels grind slow in the justice system and almost as slow in H’Wood. In 2008, we were told that Scorsese and De Niro would be re-teaming, on a script from Steven Zaillian, based off the Brandt book. Not so fast. Slow, in fact.

In 20011, De Niro told press he was readying to play Sheeran, who, some say, had better aim slinging, bullshit than bullets. In 2013, we heard about a script read through, and in Sept. 2014, Al Pacino told a journo that he would be involved. “Isn’t that something?” he said, when it was noted he’d never done a Scorsese shoot. It was something….looking like a can to get booted down the street.

The director told Variety in 2015 yep, still planning on doing another Mafia epic, “It’s Steve Zaillian writing and Bob and I are working out the schedule and the financing.”

In May of 2016, some did a victory dance because it was reported that international rights to “The Irishman” were bought. Dancers weren’t in the end zone, though. They got closer when Netflix purchased the property, in February 2017. By September, scenes were being shot, and by now, cynics had the right to be upbeat, but also cognizant of the fact that Scorsese and DeNiro, were both 74. DeNiro, especially, maybe wanted to avoid Donald Trump news, so his blood pressure would stay in a safe zone. It did–people watching the 2019 Oscars on Feb. 24 saw a teaser and pulses raced.

And the CGI that we were told would make DeNiro look like he did in “Godfather.” You wanted your money back, you wanted the old man back. He looked airbrushed, and besides that, writer Steven Zaillian wrote forgettably. You maybe saw the whole movie, what scenes were classic and enduring like what Nicholas Pileggi with input from Scorsese sculpted in “Goodfellas?” 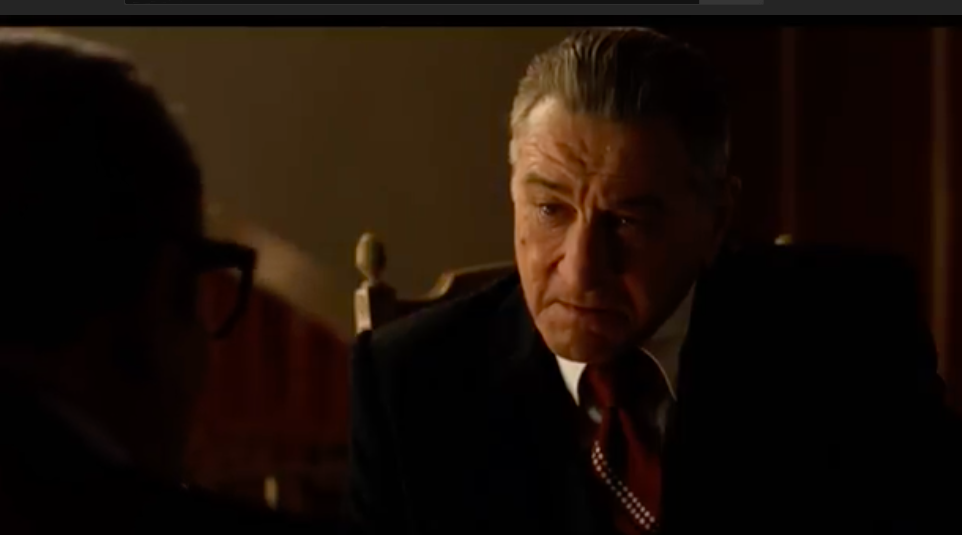 We hope the frustration at the slow pace for the Foxx-Tyson pic is brushed aside, because of the quality of the long discussed project.

The cameras too loved DeNiro and Pacino, the Marty had too much power over the editing sessions, and the makers thought that the presence of the ATGS could lift the scene quality and dialogue quality above B grade. A supposedly twenty years younger DeNiro, his energy didn’t match the age reduction.

You get the point. That world isn’t like the boxing one, really. You don’t use words like “gestate” much in the pugilism sphere, and if you do, you are discussing a project that probably disappointed, as the too late to market Manny Pacquiao v Floyd Mayweather fight did.

The aim isn’t necessarily to warn you that IF the Foxx movie gets made it will under-deliver.

If they use what Terence Winter has supposedly worked on, and he’s on form like he was for his 19 Sopranos eps, and not what he delivered to the Scorsese-HBO collab “Vinyl,” then Tyson fans and even non boxing fans could get their money’s worth.

As long as Foxx and the check-signers/risk takers get an in-prime director to handle it, I bet it works.

I just wouldn’t lay any money down on exactly when that will be.