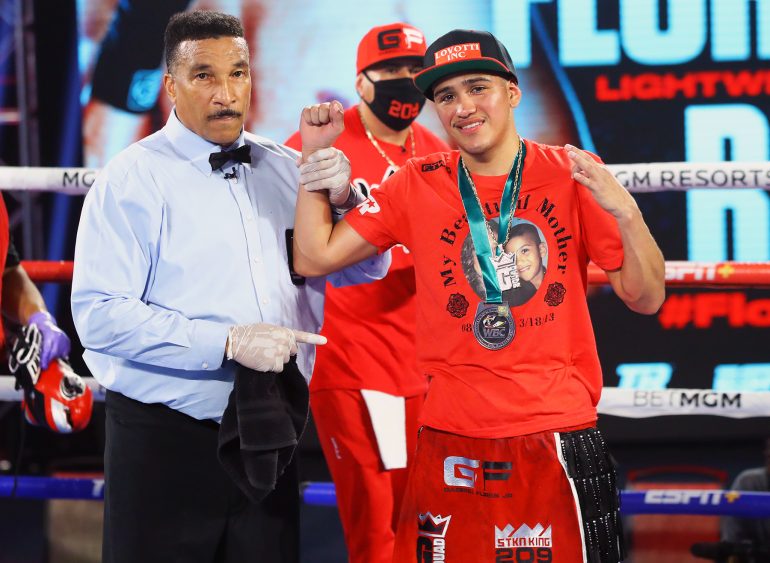 He wins, she wins. It’s the prevailing thought Gabriel Flores Jr. constantly carries with him.

Seven years ago, a baby-faced Gabriel watched his mother’s casket lowered into the ground. He walked away from the cemetery knowing that as long as he’s still moving, his mother Juanita Maldonado is still alive within him.

It’s why Flores, just 20, fights with such exuberance and confidence. It’s why he knows he’s going to win.

Thursday night on ESPN from the Grand Ballroom at the MGM Grand Conference Center, in Las Vegas, Flores flourished in his first main event on national TV, blasting out veteran Josec Ruiz in easily winning his first 10-round fight by unanimous decision. 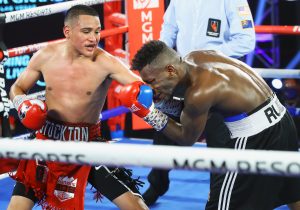 Gabriel Flores, Jr. said he injured his back in sparring and felt limited in doing everything he could against the game Josec Ruiz (Photo by Mikey Williams/Top Rank).

Everyone seemed pleased—except for Flores.

“I did great for the condition that I’m in and I had to stay focused,” said Flores, who dedicates each fight to his mother who was murdered on March 17, 2013. “In my last sparring, the last sparring is always the scariest because of injuries, and this is the worst injury that I had to deal with in the fight.

“That second round when he hit me in my back, it was accidental, but that took a lot out of my back. Tonight was the night to show everybody what a great performance was, and I didn’t get to show them. I showed them 50 percent of me, not 100 percent.”

Flores had the door opened to the main event when the originally scheduled junior welterweight main event between Jose Pedraza and Mikkel LesPierre was canceled Thursday morning after someone in LesPierre’s camp tested positive for COVID-19.

He wasted little time by walking right through and dominating Ruiz from the opening bell to the last.

Ruiz proved durable enough to take a punch. But he was too slow, and not skilled enough to keep Flores away.

With 1:07 left in the first round, Flores pulled off a sweet move, spinning off the ropes in avoiding being trapped, and nailed Ruiz with a left hook. 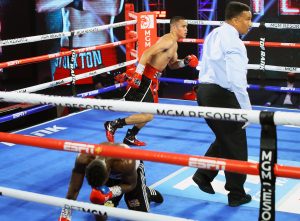 Gabriel Flores, Jr. looked sharp, knocking down Josec Ruiz with a left hook and a right in the second (Photo by Mikey WIlliams/Top Rank).

In the second, Flores knocked down Ruiz for the first time in his career with a left hook with 1:20 remaining in the round, followed by a right. Flores put more heat on, and Ruiz could do little but stand there and take it.

One of the transparent, intimate points of empty arenas is that there is nothing to hide. And if you listened closely, you could hear someone breathing heavily—and there is strong likelihood it wasn’t Flores.

You could also hear something else—the dull thud each time Flores landed a punch.

“He was a tough guy, but he was not on my level,” Flores said. “Going 10 rounds for the first time in my career was a valuable learning experience.

“I see a world title in the next 12 months. That’s my goal, but we have to see what’s out there first. I’m training in Vegas now, and the sparring and training out here has helped elevate my game.”