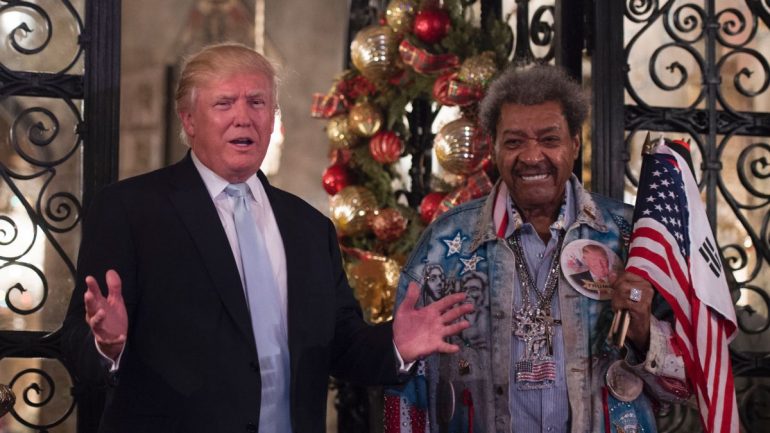 Only in America.
12
Jun
by Michael Marley

Recently on this website, I described usually hyperactive and loud promoter Don King as being as quiet as a church mouse while his beloved America has been in the throes of riot and rebellion. But do not think the 87-year-old boxing icon has been asleep in the wake of constant demonstrations and debate about systemic racism and the murder by police of unarmed black man Floyd George.

I sensed that, in his comfy South Florida seaside lair, King has been watching TV news and tracking the twists and turns, including mass arrests, steady marching and some wanton looting. DK remains a political activist in his own way, including his longtime friendship with President Donald Trump. 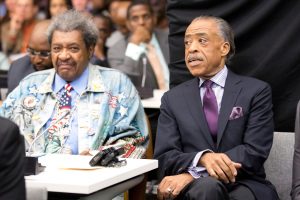 “The American Freedom Train got derailed by the system of slavery, but it can be put right and the president who is draining the D.C. Swamp can be part of making it right. Just like Rev. Al Sharpton is playing his own part so is and will be Donald Trump. God is in charge in this cause and God is using people for certain parts and certain roles,” the effusive King said.

Has he chatted with Trump during the ongoing protest period?

“Not lately, no,” the self-styled “Republicrat” told me. “But I will be speaking with him soon.”

“We’ve got to look at everyone without bias, with impartiality and fairness. I am involved in fixing America, in bettering this great nation and so is Sharpton, who I thought did some magnificent eulogies for Floyd George, and so is, despite all those lined up against him, is our president. We all have a common problem named racism and common cause to remedy it.”

King, known for steady declarations of “Only In America,” is heartened by the thick crowds of young people of all races who keep on marching and demanding changes in a criminal justice and beyond. He, too, thinks “this time will indeed be different.

“I am optimistic, very much so,” King said. “God don’t like ugly. This can be a turning point in the history of this great country. I think people are getting the real message loud and clear. Like I say, this all stems from slavery, the whole system.

“Maybe we’ve been in the darkness, but it has all come very much into the light now.” 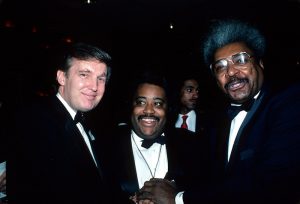 Could these three longtime homies be “agents of change”?

King repeated his assertion that both President Trump and Preacher Sharpton can be positive agents of change.

“So many are lined up against our president and they see him as guilty as charged without real proof. They make him guilty until proven innocent and that is not right either. We must all work to Make America Great Again.”

King and Trump had numerous boxing dealings dating back to when a young Iron Mike Tyson was the maddest, baddest man on the planet and Tyson fought at Trump owned hotel casinos in Atlantic City.