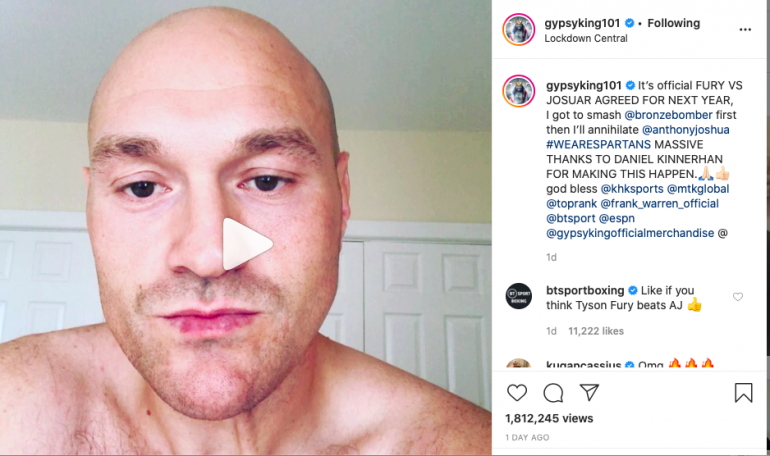 Tyson Fury took time to chat with Joe Tessitore, the lead man in boxing coverage for ESPN’s on air crew, and viewers heard from “The Gypsy King” before the main event of the Thursday Top Rank programming slate.

In the main event Thursday, Jessie Magdaleno got the W against ultra chippy Yenifel Vicente, in a 128 pound max faceoff. Top Rank is in a ramp up mode, so they aren’t looking yet to conjure some of the the A side vs A side coin flip matches which would be more likely to be catnip to casuals.

Hardcore fans know that the 31 year old Fury took to Instagram on Wednesday, and shared that an agreement had been made for the ultra charismatic work in progress, to fight Anthony Joshua, in 2021. 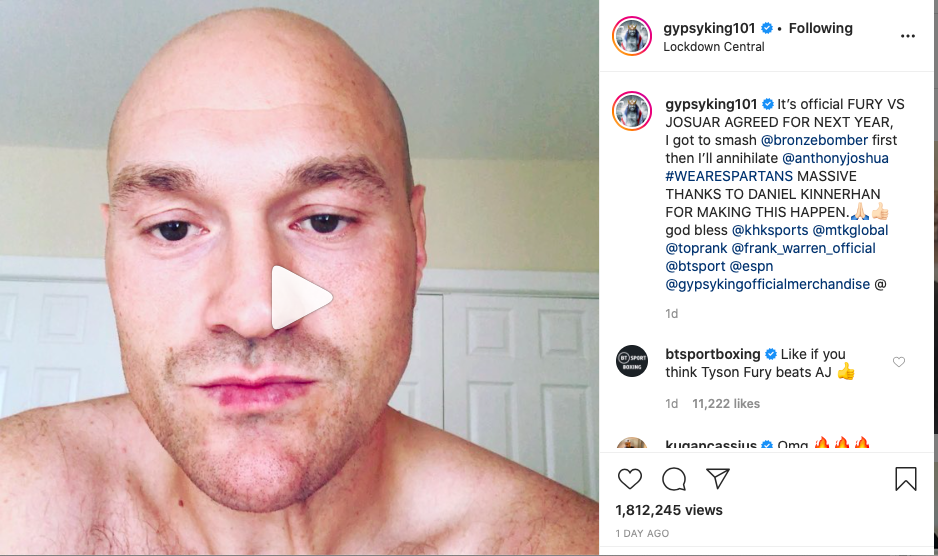 He grinned as he said that he’d just been off the phone with advisor Daniel Kinahan, a quite controversial figure who left Ireland and is now based in Dubai, apparently.

On Wednesday, ESPN.com ran an AP story which referred to Kinahan as someone who’s been investigated for untoward activities.

“The High Court in Dublin (Ireland) previously named Kinahan as a senior figure in an organized crime gang involved in international drug-trafficking operations and firearm offenses, the British Press Association reported,” read an excerpt from the AP piece.

Top Rank bossman Arum is comfortable working with Kinahan and told IFL, a videography site gets sponsor money from MTK Global, the management company purchased wholly by Kinahan in 2017,  that, “We have great confidence in Dan. He is in effect our adviser regarding the Middle East.”

Mind you, Arum worked in Robery Kennedy’s Justice Department before he entered the boxing sphere, and in boxing since 1966, so he’s no stranger to all the different sorts of bedfellows than can cross paths in the world of big money commerce, and the boxing sphere. “He is one of my favourite guys. No-nonsense, whose word is his bond,” the Brooklyn born deal-maker continued.

Kinahan also advises Billy Joe Saunders, another fighter who makes headlines when he steps in it now and again, to put it gently. “People don’t respect him because they fear him,” Saunders has said, “they respect (Kinahan) because he’s a good businessman and knows his way round the boxing world very well.”

Arum (below, left) has regularly sparred in the media with Brit Eddie Hearn, who reps Joshua, so him finding someone else who can apparently be a buffer and save him interaction with Hearn may help keep his blood pressure down. 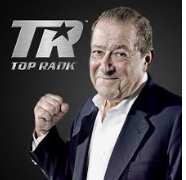 The AP story was headlined “Outrage in Ireland,” though, so this may well be a sub plot which gains more steam and attention. Boxing’s low (no?) barrier to entry means that many of those involved have a policy which centers on now what a possible partner may have done in the past, but how the interaction in the present proceeds. Arum seems to have eyes wide open, as he told the Irish Sun: “I’m not naive. I was a federal prosecutor myself. I’m saying I can disregard all of that stuff. It doesn’t affect me. It hasn’t affected me.  When it does, I’ll have to deal with it. But right now, I have absolutely no involvement with the Irish authorities. Nobody has come to me, nobody has questioned me. So my philosophy is, ‘Stick to your business son’ —  meaning me. Stick to your business and don’t be distracted by the background noises…Anything that went before — allegedly went before — that’s none of my business.”

Fury in his IG update cast not half a hint that Kinahan is anything but a skilled negotiator, though, regularly, Irish media goes at the man who has beefed up his following by sharing details of his mental health travails, including periods of suicideality, for his alignment with Kinahan, whose father Christy Kinahan, age 64,  has served time.

“(Daniel Kinahan) just informed me that the biggest fight in British boxing history has been agreed,” Fury said, with heavy enthusiasm on the IG bit. “Two fight deal,” said the 30-0-1 boxer, doing his social hit shirtless.

First, though, Fury said he’d have to meet and defeat Deontay Wilder (42-0-1), who he called “a hurdle in the road.” A hurdle that he promised to once again stop, for the record.

Tessitore talked a shirted-up Fury, in a taped hit, and the man still on a fight from his Feb. 22 triumph over Wilder had a grin just as gleaming as on his IG sesh. 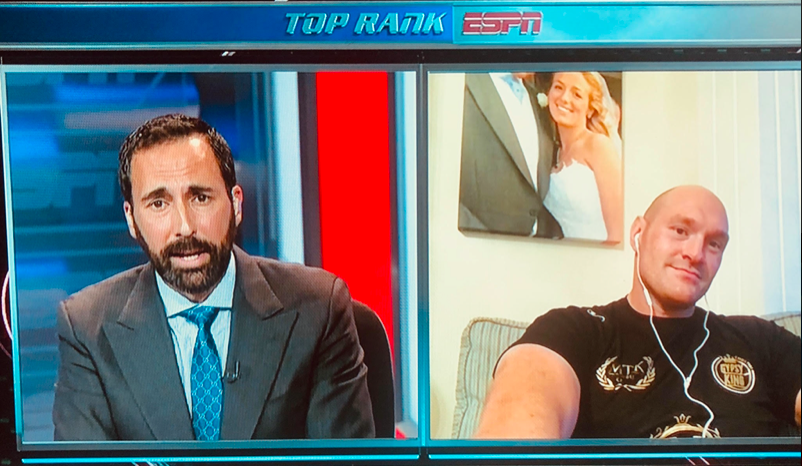 Fury, 32 in August, told Tess that he knows that some say it’s unwise to book fights in advance, because that can leave one overlooking the “first foe.” But he said he’s studied the last fight against Wilder and won’t assume he will roll over the Alabama boxer.

Joshua too has to hop a hurdle, in Kubrat Pulev, and the tall ring general stated that yes, terms for an AJ scrap are in the prelim stage. Also, no date or venue set for Fury-Wilder 3. Fury said he’d like to meet Wilder in Las Vegas, but, again, AJ has other business to take care of. Rememer what Andy Ruiz did to AJ, he reminded.

Fury looked fit, it seems that he’s staying on message mentally, and not celebrating with too frequent trips to the fridge. He has spent time watching, and re-watching, maybe ten times, his stoppage of Wilder. He promises to be totally focused, because he thinks this is Wilders’ last chance at a big time tango.

Fury proved to be an upbeat ambassador for the sport, saying that boxing is on an upswing, because the sport can actually pick up eyeballs, because there’s a dearth of live sports available. So, fan free events are great, “but I cannot wait to get back to capacity stadiums sold out, like the Deontay Wilder last fight with myself, and hopefully one day we get to sell out that new Raiders stadium in Las Vegas, 45,00 seater, and I believe if there’s anyone to sell out it would be ‘The Gypsy King’ in his new home.”

ESPN offered up more news tidbits, including sharing on the status of Shakur Stevenson’s left hand. He dropped it pretty good on Tuesday foe Felix Caraballo, but winced at one point, and feared he busted something on the head of the loser. 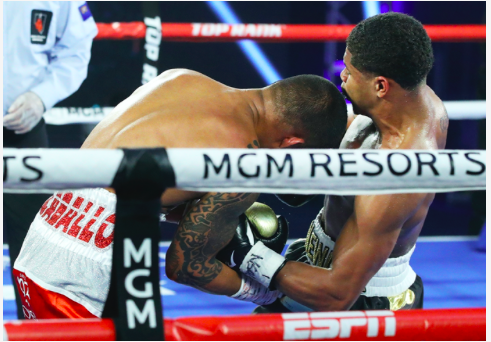 That left hand that Shakur threw at Caraballo has been x-rayed and seems to be A-OK. (Photo by Mikey Williams for Top Rank)

Post-bout, a doc probed the winner’s left hand, after it got unwrapped. We saw video of the exam, the masked doc gingerly pressing. The hitter, who liked how he felt at 130 in scoring a round six stoppage, shared that “My hand good the doctors cleared me.”

His co manager Andre Ward said that there is some inflammation, but no fracture, not even a micro. The fighter turned analyst said there will maybe be a September return, and Leo Santa Cruz could well be the targeted next. What about Josh Warrington? The Brit would like a crack, but Mark Kriegel said that he thinks Miguel Berchelt would be a sweet style match for Shakur.

This was the second Top Rank card during the “return to business” phase of the coronavirus era in America. It reminded us from the ring action, and from the out of the ring segment which featured Fury, that no other sport can match boxing for variety of theater offered by the compelling cast of fighters, promoters, advisors and more who constantly find new ways to surprise us.