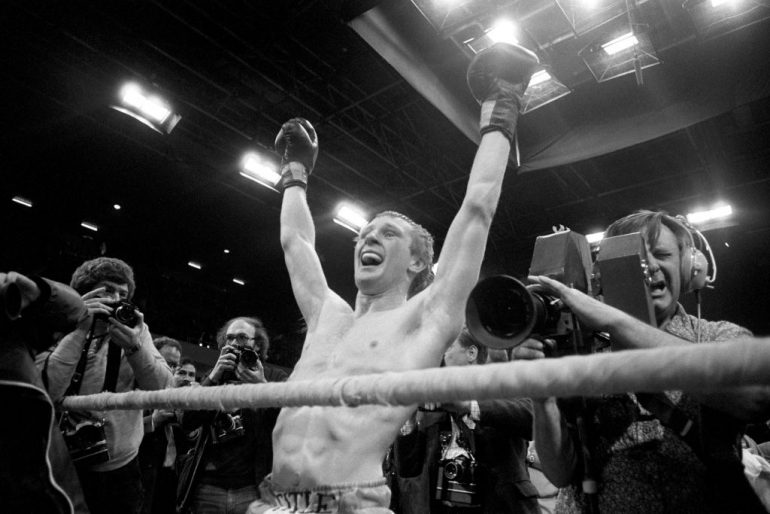 Losing to Ken Buchanan was a turning point in the career of Jim Watt.

The two Scottish lightweights locked horns for Watt’s British title on January 29, 1973 in Glasgow. It would be Watt’s 18th bout of what had been a domestic career to date. Buchanan, meanwhile, returned to Britain after a three-fight run at Madison Square Garden, which included losing his WBA lightweight title to Roberto Duran in June 1972.

A win for Buchanan in his 48th contest would give him the British title for keeps. It was the 24-year-old Watt, unproven at world level, against the 27-year-old Buchanan, who was arguably the second or third best lightweight in the world at that time, depending on where you placed Esteban De Jesus.

“I have absolutely no regrets about taking the fight,” said Watt, who lost a 15-round decision in his first defense.

“I was champion and if you want to be champion you’ve got to beat the best, so I took the fight and although I lost on points, what a battle it was. The performance I put up against Ken probably did me more good reputation-wise than any of my victories up to that time. So, although I lost the title it was a good decision to take the fight because it did me an awful lot of good. I think I was looked upon with a lot of respect from that fight onwards. Also, it let me know I can compete at that level.”

Almost two years later to the day, Watt regained the British lightweight title by stopping Johnny Cheshire in seven and his development continued apace. The Glasgow-based lefty captured the European championship in August 1977, and, in his second defense, he scored an impressive victory over former WBC lightweight title holder Perico Fernandez.

“Nobody got a points victory in Spain,” said Watt of the Fernandez fight.

“If the fight went the distance the local guy got the verdict. Perico was a massive puncher, a real good fighter, and I’m facing him in Madrid. He knocked me down in the opening round. I got up and for the next 14 rounds I did not leave him alone. I did not give him a second to catch a breath. I gave him three standing counts in the later stages. I won it so clearly, they couldn’t not give me the decision. I won it clearly so that again told me I could be world champion.”

Fourteen months later Watt would get his opportunity at the vacant WBC lightweight title and that is where the now 71-year-old begins his look back at five of his biggest nights.

“The atmosphere was terrific. Pitalua was a good fighter, not a well-known fighter, but he was No. 1 contender in both ruling bodies (WBA and WBC) at the time. I was almost 31, so I knew this was the only chance I was going to get to become world champion. I wasn’t going to get a second chance, so I think it may have tightened me up a bit in the early rounds. Pitalua was a fast starter and he threw loads of combinations. He was very strong and he could punch. I found the early rounds a bit rough but I stuck with him. The longer the fight was going I could feel that I had a grip on the fight. In the exchanges I was having the last word and one of my advantages in my career was that I was a right-handed southpaw. When I threw a jab, when I landed a jab, it may not have looked much but there was power behind it. It was my strong hand I was landing the punches with. It was a real hard fight, but I could feel that my jabs and my follow through punches were taking their toll on him. He set a tremendous pace and I probably paced the fight better than he did, so by the 9th or 10th round I pretty much knew – I’m going to win this fight; I’m going to become world champion. Pitalua was tough and it was a great night. If you ask me what the greatest night of my career was, for me, it’s that night. I won the title. Other people tell me they seen better performances from me, but that’s my favorite night.

“When I was British champion Charlie became No. 1 contender for the title. I was ordered to defend against him, but I was offered the chance to fight for the vacant European title, so I gave up the British and won the European. Two years later Charlie was nominated European No. 1 contender. I was ordered to defend my European title against Charlie, but I got the chance for a world title and gave up my European title. So twice I’ve been told to face Charlie Nash and twice I’ve given up the title. So you can imagine Charlie beating the drum that Jim Watt is scared to fight me; he’s ran away twice. Charlie knocked me down with a two-punch combination in the first round. I wasn’t hurt at all. I was down and bounced straight back up. I don’t know if that early success made Charlie a bit more aggressive than he should have been, but he gave it a real go and we teed off on each other. I was certainly stronger than Charlie and my punches were having the effect whereas Charlie’s punches weren’t, but I would never have dreamed that Charlie and I would have been a four-round fight. If Charlie had boxed to his normal style it probably wouldn’t have been, but Charlie picked the wrong tactics that night because of the early success.

“I think everyone, not only in America, but in Britain as well were of the impression that Jim is world champion until Howard comes along and takes it off him. I think that was the perception. Howard was faster than me, he probably had more natural talent than I had, but I was the one with the experience. He was making statements [like] he could beat me with one hand behind his back, smoking a cigarette – that was one of the quotes. I think he came over [to Scotland] over-confident and badly prepared because he thought it was going to be a lot easier than it turned out to be. Howard was doing the right things in the early rounds, but they weren’t working, I wasn’t letting them work. He was getting caught and he couldn’t understand why his punches were missing. I old manned him out of it. I beat him clearly. As soon as it was over, I walked to the crowd with my hands up, to the four corners, I didn’t need to wait for the decision. Everybody knew I’d won it because of experience. He was very quick, he was very clever, he just didn’t have the experience needed that night. I was sorry to hear that we lost Howard recently.”

“The Sean O’Grady fight was big. He only lost once to a great fighter [Danny Lopez]. He was a white, all-American boy, he was big news and that was a big fight for me. It was such a big fight American television wanted to show it live, so the fight took at place 2am in Glasgow. Sean, although he had many fights, they weren’t [against] top notch opponents. I just thumped away and forced him to make mistakes and punished him for the mistakes. I was badly cut, I think in the 9th round. I was well ahead on points at this time. The fight carried on, so I had to tighten my defense and keep doing what I was doing. The next round there was an unintentional clash of heads. I think I coped with my injury better than Sean did. My corner did good work with the injury to stop the bleeding. Sean’s corner didn’t do such a good job. The next round and the round after that the blood kept coming down on to his face and it was obvious the referee couldn’t allow it to continue. Sean, he was badly upset with what happened. I was landing punches on him, he wasn’t landing punches on me. The referee eventually waved it off. People have said since it should have gone to the scorecards and I think they’re right. Sean lost the early rounds, he got himself into the fight in the middle rounds, and then the clash came, I think it just broke his heart. He must’ve watched the blood coming from my cut and thought I’m going to become world champion and then bang, a clash of heads. Not the way you want to win fights but there you go. Thankfully, Sean challenged for the WBA title and did a real job on Hilmer Kenty.

“We knew he was a great fighter, a hell of a fighter. What a gentleman too. The first time I met Alexis was at a press conference in London and he walks up to me, puts a hand out, shakes my hand, and says, ‘Pleased to meet you Jim, how’s your family?’ I knew he was a great fighter but a little bit mechanical. I thought, I’ll be able to confuse him, get him rattled, get him annoyed, get him to make mistakes because that’s what I did with people. As the fight goes on I’m doing things, offering stuff and Alexis is just looking at me. It’s not happening for me. As we get through the fight, I think I pretty much knew that I wasn’t going to win. Maybe if the fight had taken place a year earlier, I don’t know. It was my sixth world title fight in the space of two years. I was getting my biggest ever purse. I think I was maybe looking at retirement as well. I got a bad cut on the inside of my lip, maybe 10 rounds in, and I come back to the corner. [Trainer-manager] Terry Lawless could see that it wasn’t going to go my way and I wasn’t going to change. He was desperate to pull me out and I think if it had been any of Terry’s other fighters, he would have just pulled them out. It was a bad cut, I’ve still got the scar in my mouth, but I said no way. There is no way I’m going to quit. If a fighter gets knocked out, well and good. Some of the greatest fighters in the world have been knocked out. I’m not going to quit. I’m going to be retired a long time and I’m not going to quit. I didn’t quit, I went the whole 15 rounds, but it was a hard night for me – a real hard night. I lost but I had a great run. I had six world title fights, which I think, at the time was a post-war record for a British fighter. My life had changed for the better forever and I lost my title to a great fighter.”