Andy Vences is looking at what’s next 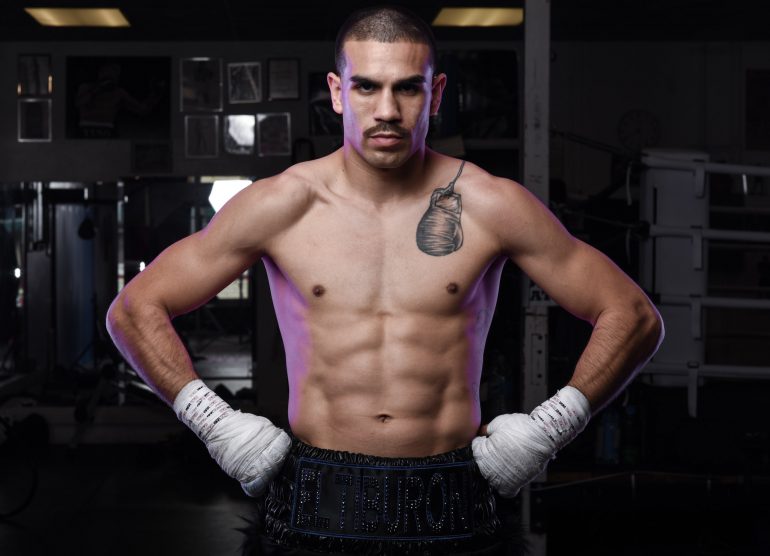 28
May
by Joseph Santoliquito

Andy Vences turned 29 on Thursday. The junior lightweight contender fought three times last year, including his first professional setback, an upset 10-round loss to Albert Bell on June 15 at the MGM Grand Arena in Las Vegas.

It was tough to deal with, Vences admits. He also admits that he has to be held accountable.

Vences at least got one more fight in, beating Mark Bernaldez in October, before the COVID-19 pandemic shut down the boxing world for what has been much of 2020.

In the long run, “El Tiburon” feels he’s going be even better after the Bell defeat. Vences (23-1-1, 12 knockouts) knows what he did wrong, and he also knows it’s correctable. 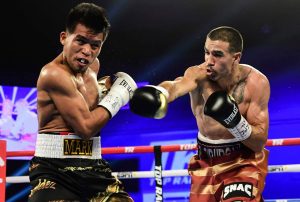 Andy Vences got back in the win column in October by beating Mark Bernaldez,

“The next time around, I can’t assume a fight will go a certain way,” Vences said. “What I learned from the Bell fight is we were looking at footage of Albert Bell before I fought him. What we didn’t see was his ability to move around and show the boxing skills that he had for 10 rounds.

“The footage we saw were his feet stuck in the ground. We sparred against taller fighters (Bell is 6-foot, Vences is 5-foot-8½). We didn’t think he would fight that way for that many rounds. He looked like he was vulnerable to get hit.”

Vences will know better next time.

“I needed to go forward, and I didn’t get really aggressive the way I would have until late in the fight,” Vences said. “I did learn that I am a 12-round fighter. I learned that in both my loss and my draw. I was coming on. If both fights would have been 12-round fights, I would have won.

“I know now that I need to start a little sooner.”

Vences, who is trained by Angel Cordon, managed by Peter Kahn and promoted by Top Rank, is holding out hope to still fight two, possibly three more times before the end of the year.

“My head is right, my age is right, and I discussed this with Peter, I’ll fight anyone in this division,” Vences said. “It’s all about making it happen and getting these fights.

“I can beat anyone in this division. I’ll train hard and I’ll be ready.”

Vences was aiming at WBO titlist Jamel Herring (21-2, 10 KOs), but those plans were temporarily scuttled by the Bell loss. Moving forward, Herring does make sense, considering the two fall under the Top Rank banner. Another future possibility is WBC beltholder Miguel Berchelt (37-1, 33 KOs).

Though Vences realizes he’s going to have to do some backtracking before he can move forward.

“It could be anyone, but I am training and looking to fight within the next two months, and I’ll be ready for a fight for anyone if someone falls out,” Vences said. “I know I have to get one more fight, before I get a title shot. I’ve been following the social-distance guidelines, but I have been training and running.

“We’re doing everything that we’re allowed to do. I will be ready for anyone in July.”

Vences had hopes of fighting four times in 2020. That goal has been chopped in half.

“The priority is getting one more fight, and I have to take that one big step, before I take the next big step,” Vences said. “I’m walking around at around 145, so even a week before a fight, I’m usually about 140, 141.

“I’m one of the bigger 130-pounders, closer to 5-foot-9 than 5-8. I train hard and spar hard. I monitor things and my weight comes down very easy. Looking back, Bell won the fight. I give him all of the credit. I started too late, and by the time I started catching him, I thought I could pull off Julio Cesar Chavez-Meldrick Taylor comeback. There’s no losing—only learning.”

“I would say our aim is to get Andy back in the ring in late-July,” said Kahn, a 2019 BWAA Manager of the Year nominee. “I think Andy’s loss to Bell as a blessing, because it will help Andy approach his next fight differently, and take advantage of every opportunity it presents.

“Andy will be better prepared to win these big fights.”