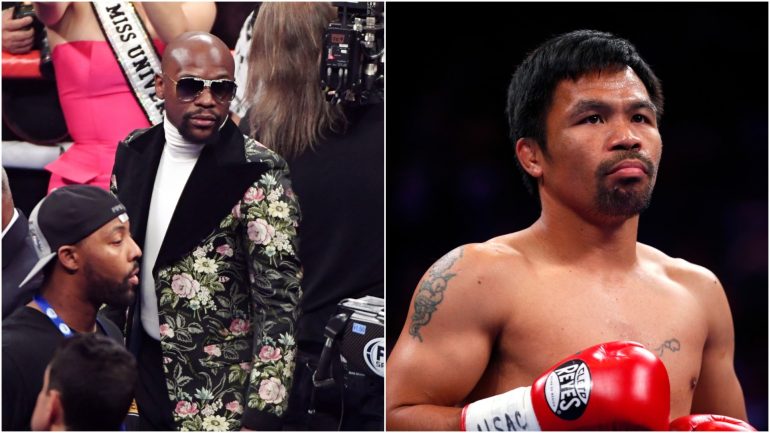 26
May
by Sporting News

Manny Pacquiao suggested Floyd Mayweather Jr. is jealous of his prolonged career after the American labelled the veteran welterweight an “old man.”

Mayweather was critical of younger fighters “chasing” a bout with 41-year-old Pacquiao, who won his most recent fight against the previously-undefeated Keith Thurman to claim the WBA super welterweight title last July.

“I don’t have anything against him, but it’s not me. It’s sad that you hear guys say, ‘I want to fight Manny Pacquiao.’ But Manny Pacquiao is 41 now. Don’t chase him. You young guys chase each other. Stop chasing this old man. If the opportunity presents itself, go out and do what you got to do,” Mayweather told Fight Hype. “Let Manny Pacquiao pick and choose who he wants to fight. With everything he’s accomplished, hopefully, he’s made some smart investments.”

MORE: Mike Tyson’s first opponent in comeback fight may have been revealed

However, Pacquiao has little regard for Mayweather’s comments, claiming the 43-year-old, who last fought in 2017 against UFC star Conor McGregor, wishes he was still fighting.

“He is just envious because he’s already retired. We’re still active and have a crown,” Pacquiao told The Manila Times. “I’m not thinking about that yet. I’m concerned first and foremost about our countrymen. No retirement [plans] yet. I’m still training, God is good.”

With the majority of sporting events currently on hold due to the coronavirus pandemic, Pacquiao – who is also a senator in the Philippines government – is focused on helping his country’s people during the crisis.

“I’m concerned first and foremost about our countrymen and about how to resolve this [coronavirus] pandemic,” he added.