Trinidad Vargas Was Born To Box 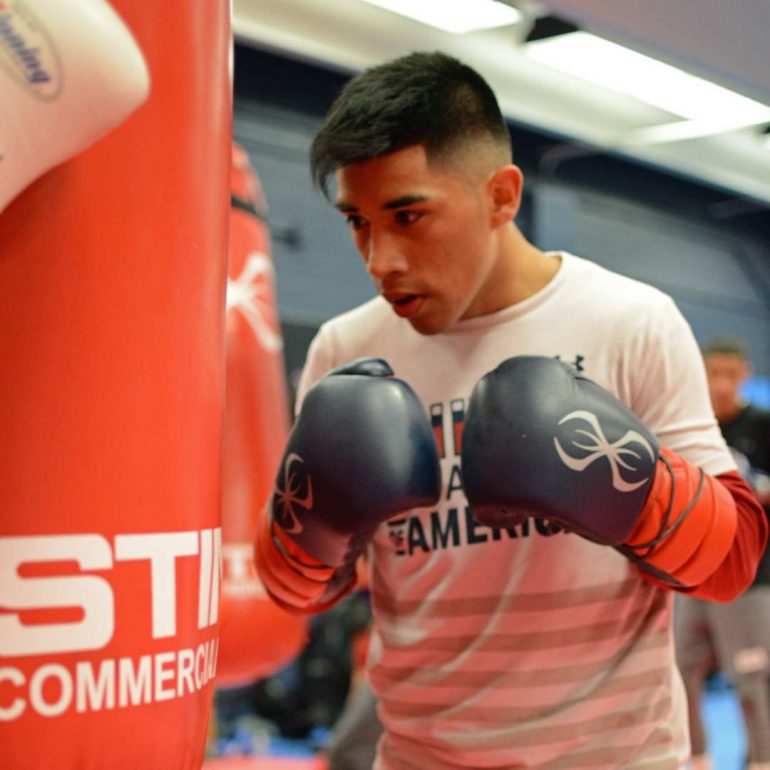 21
May
by Joseph Santoliquito

Trinidad Vargas used to move around every time he heard the sounds of the gym, his mother Angie would tell him. The whomp, whomp, whomp, of the heavybag or the tinny, grating sporadic chime of the bell was enough to stir him in Angie’s womb.

Whether or not Trinidad was really throwing placenta punches before he entered the world, the 16-year-old prodigy seemed destined to box.

Despite being barely old enough to drive, it has not stopped Trinidad from turning pro, when he signed with Peter Kahn in January. Based in Dallas, Texas, Trinidad posted an impressive 198-12 amateur record. Since he is about to turn 17 on June 19, he was not about to wait four more years for the 2024 Olympics.

He already possesses one of boxing’s coolest names.

Trinidad, who’s named after Hall of Fame fighter Felix “Tito” Trinidad, as well as the Holy Trinity, is looking to validate a distinguished amateur career that includes being a two-time Junior Olympic gold medalist, being ranked No. 1 in six different weight classes (114 lb., 110 lb., 106 lb., 101 lb., 95 lb. and 90 lb.), picking up an international bronze medal and being a five-time best fighter national tournament award winner.

Kahn is looking for Trinidad’s pro debut at junior bantamweight to fall sometime between late June or August, possibly in Nevada, New Jersey, or his home state, Texas, where 17-year-olds are allowed to fight.

In June, Trinidad will adjust to his new life, making the move from Texas to Davie, Florida, where he’ll be trained by his father, Nick, and Javiel Centeno at the Sweatbox Boxing and Fitness Center.

He’ll also be home schooled in the fall, finishing up his senior year of high school.

It’s a lot to juggle for any normal teenager. Though to Trinidad, it’s not.

This is something he appeared ordained to do. When Trinidad was barely able to walk, Nick would prop him up when they would watch fights. Trinidad, who’s 5-foot-5, would mimic what he saw on TV.

“I started fighting before then,” said Trinidad, laughing. “If I could have, I probably would have come out with boxing gloves on when I was born. My mom used to go and watch my father at the gym.

“She used to tell me when I was in her belly that I was ducking and throwing punches when I was cooking.”

Trinidad formally began boxing when he was six, and won his first tournament by eight. The oldest of four boys, who range in age from 16 to 3, Trinidad was throwing combinations when he was three.

His early influences were Floyd Mayweather Jr., Canelo Alvarez, Vasiliy Lomachenko and Jo Jo Diaz. He’d incorporate what he liked about their styles into his own.

“Starting so early and knowing more at a younger age I think gives me an advantage,” said Trinidad, who won his first national title at 13. “I consider myself an athlete who boxes, but I am a boxer.

“It’s something I always wanted to do. There are a lot of sacrifices someone my age has to make.”

His regimented schedule meant being home from school by 3:15 p.m., having a light snack, doing homework and then hitting the gym from around five-to-eight.

Then, going home to have dinner.

“Over the years, I got used to it,” Trinidad said. “I can commit fulltime to that schedule. The only difference now is I’m being home schooled.”

Still, he’s up at 5 a.m. doing road work before the Texas sun rises.

“I accept the fact that boxing is a lifestyle,” Trinidad said. “I have different dreams than other kids my age.

“I remember one time in grade school, they asked all of the kids to stand and announce to the class what they wanted to be. I said I wanted to be a boxer. Here I am in 2020, committed and turning professional. 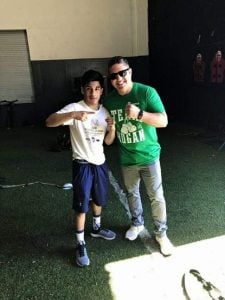 Trinidad Vargas with manager Peter Kahn, who has big hopes for the 16-year-old prodigy.

“Not a lot of kids I went to school with could say they stuck with their plan. I’ve held mine down.”

Trinidad says his parents, Nick and Angie, are the reason. They’ve kept him disciplined on the rare occasions when Trinidad needed a nudge to get up and run, or remind that he couldn’t attend a dance because he had an upcoming tournament.

Nick was a pretty decent fighter himself in the early-1990s and competed in a few national tournaments. Although, he was never as good as Trinidad. Nick exposed Trinidad to boxing at an early age. His son married the sport quickly. Around the time Trinidad turned eight, Nick had a feeling he could do some things.

But all children like shiny new toys. Boxing was Trinidad’s glittery fresh outlet. The toy is great for one hour, maybe two, maybe for a day, before they get bored and move on.

“Angie and I instilled the discipline to make Trinidad understand what had to be done outside what I was telling him,” Nick said. “As he got older, he started doing things on his own. When he was younger, 8, 9, 10 years old, I had to get on him to run and train.”

When Trinidad was around 14, Nick noticed that he was making the kind of commitment he needed to succeed. He was getting up on his own; training on his own.

“That told me he was serious,” Nick said. “Like any father would be, I’m proud of him; very proud of him.”

Kahn, a 2019 BWAA Manager of the Year nominee, was impressed by Trinidad’s amateur record. But he had to see for himself. In April 2019, Kahn flew Trinidad and his father down to Florida for a month.

Kahn, who also has hot prospects Xander Zayas, Aaron Aponte, Nikoloz Sekhniashvili and lightweight Charlie Sheehy, liked what he saw. He found Trinidad possesses a maturity that belies his age, combined with power and speed in the ring.

What really convinced Kahn to commit to Trinidad was his family. They’re salt-of-the-earth folks who follow old-school tenets.

“Trinidad is a promotional free agent, because we haven’t pursued anything and he turns 17 in June,” Kahn said. “A lot of people might say he’s too young, but I don’t know when anyone decided that you had to turn pro at 22 or 23.”

Look back historically, Kahn noted. Look at the successful fighters who had longevity, he stressed. Sugar Ray Robinson had his pro debut when he was 19. Mike Tyson turned pro at 18. Manny Pacquiao and Alvarez turned pro at 16.

“So, when you can start a kid with 198 wins over a lifetime amateur career, why keep him in the amateurs any longer, when he can move patiently, efficiently as a pro?

“By the time Trinidad reaches that maturity, let’s say at 21, he’ll be beyond ready to fight for a world title, with almost a decade ahead of him to move up in weight, defend titles and retire by 30 from the sport.

“He has the makeup and skill to do it.”