From the archive: George Foreman is a gentle giant 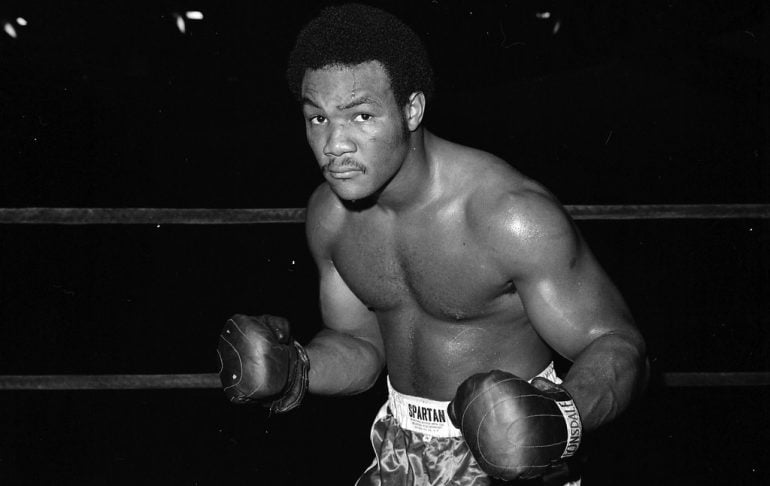 George Foreman circa 1970. Photo from The Ring archive.
17
May
by The Ring

Editor’s Note: The feature originally appeared in the May 1973 issue of The Ring Magazine.

The shockwaves of George Foreman stunning two-round knockout of Joe Frazier are still being felt around the world. There are many who feel that big George’s victory over the heretofore invincible Frazier was simply a fluke, that Frazier was (a) not in top condition and (b) failed to take Foreman seriously enough. And, if you listen to Muhammad Ali, he’ll have you believe he’s the one who really beat Frazier, and that Foreman, despite the fact he is the heavyweight champion of the world, is the rankest of amateurs.

But George Foreman is as big as life and hits twice as hard. He is a gentle giant, goes about his business quietly and efficiently, believes in God and the United States of America, not to mention Mom’s apple pie.

A fellow who waves a little American flag after winning the Olympic heavyweight gold medal can’t be all bad. 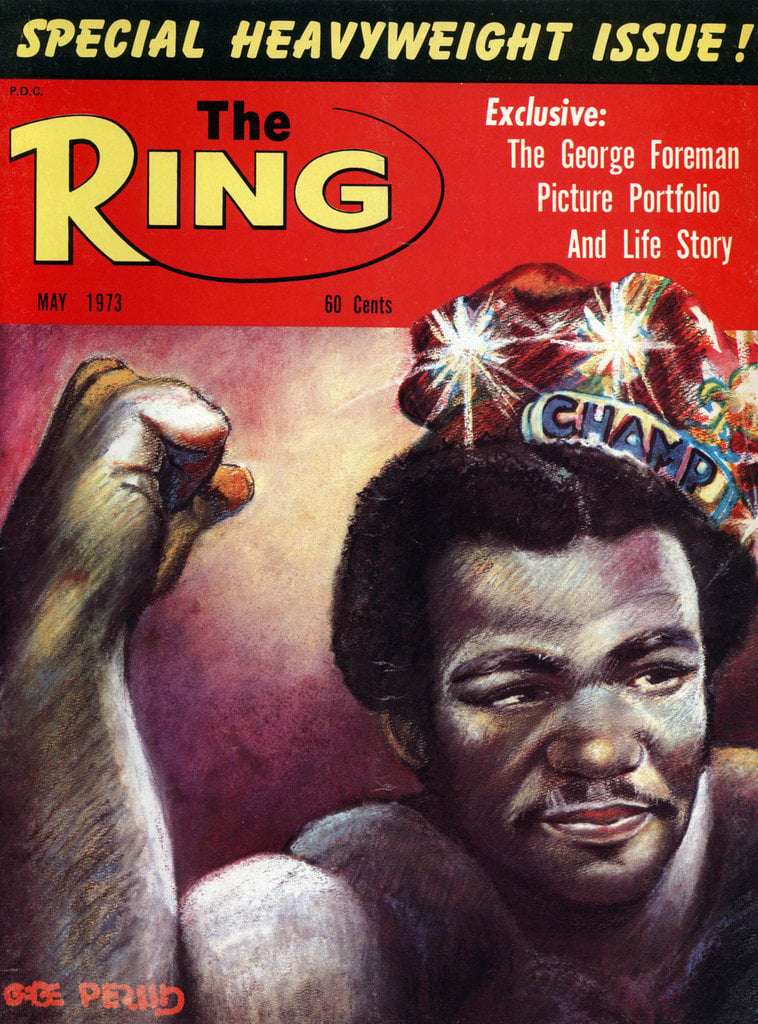 The 25th boxer to hold the heavyweight title was born in Marshall, Texas, on January 22, 1948, when Joe Louis was a year away from retiring as heavyweight boss.

George was the fifth of seven children born to a railroad construction worker and his wife, Nancy.

“I was always in trouble as a kid,” George candidly admits. “The juvenile authorities were always after me. I grew up in the Fifth Ward in Houston, which is mostly black. The cops knew me. You name it, I had done it. There was one week when I broke 200 windows and didn’t even get caught. But the next week I’m walking down the street with a rock in my hand and the cops pick me up.

“In the Bloody Fifth I mingled with dope addicts, ex-cons, the worst of thieves and criminals. At the time it seemed as if I would end up just like them. And I was always in some kind of street fight.

“I was also a high school dropout, quitting E. O. Smith Junior High in 1963, then took to hanging around on street corners because there didn’t seem to be much of anything else to do.”

Of course that spelled more trouble. Then came the dawning and a complete turnaround in the life of George Foreman, future champion of the world.

When he was 16, he saw pro football star Jim Brown on television talking about the Job Corps. Deciding that he had nothing to lose, Foreman joined up in 1965 and was sent to the Fort Vannoy Conservation Center, near Grands Pass, Oregon, where he learned bricklaying and carpentry.

In February 1966, George was assigned to the Parks Job Corps Center, operated for the Job Corps by Litton Industries, in Pleasanton, California about 40 miles east of Oakland. It was there he qualified as an electronics assembler and earned his high school equivalency certificate.

Always a good athlete, Foreman spent many of his off-duty hours playing tackle on the Pleasanton football team where his size and speed attracted the attention of Nick (Doc) Broadus, the camp’s vocational guidance director.

Broadus talked Foreman into trying some boxing. The youngster put on a pair of boxing gloves for the first time in December 1966, and as Broadus recalls, was given a rather rough time of it by veteran Max Briggs. For several days thereafter, George stayed away from the gym.

“I went looking for him,” remembers Broadus. “He told me he didn’t have any tennis shoes, so I got a pair for him and invited him to work out with the team. He trained for a few weeks, then disappeared again when he was scheduled to appear with the Parks’ team in a local meet. But later, he showed up and began working out again for the squad.” 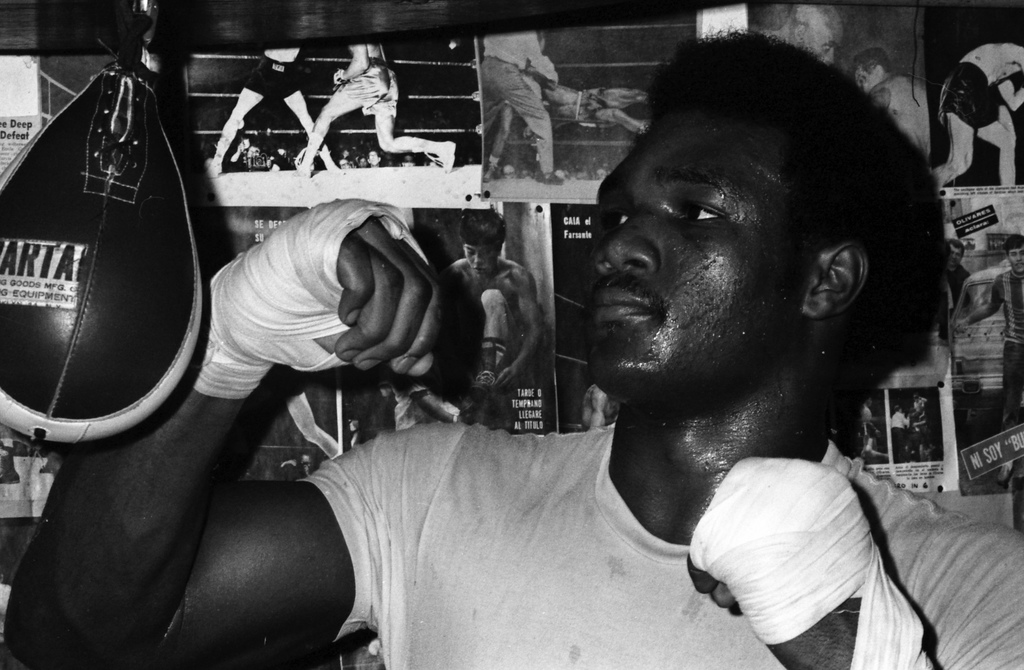 Foreman’s debut as an amateur boxer occurred on January 26, 1967 when he scored a one-round knockout in the Parks Department Diamond Belt Tournament.

In early March, Foreman lost a split decision in the Senior Division finals of the National Golden Gloves.

Doc Broadus was extremely pleased with the progress of his young charge. He felt that in George he had a future ring great, predicting, “He’ll stop everybody in sight because he’s a natural. God bless the puncher.”

But it wasn’t until much later than George began to appreciate the faith Broadus had in him. “Doc kept talking about the 1968 Olympics and how I could win a gold medal in Mexico City. But it didn’t make too much of an impression on me. What did I know about the Olympics? Broadus kept telling me about Floyd Patterson, Cassius Clay and Joe Frazier and what the Olympics had done for them. Suddenly, I developed a lot of interest in what Doc had been telling me.”

In July 1967, Foreman completed his training with the Job Corps and went back to Houston. He couldn’t find a job, however.

George then decided to return to the Job Corps as an avocation instructor, being paid $465 a month in the Parks’ physical education department.

In recalling his failure to find work in Houston, George says, “I think it was discrimination, but I can’t prove it.”

He went back to boxing with an eye set on the Olympics. George won his first fight in 58 seconds, and the next in 54 seconds. In January 1968, Foreman took on Clay Hodges, the National Golden Gloves champion, but lost a split decision.

In February, George won the Examiner Senior title in San Francisco with a KO over L. C. Brown. A bit later that month, in Las Vegas, Foreman dropped another decision to Hodges.

Then in March, Foreman captured the National AAU heavyweight championship in Toledo, Ohio by winning four bouts, three by knockout. That accomplishment virtually assured George of a place in the U.S Olympic team.

In August 1968, the AAU sent a 10-man team to West Germany, where Foreman won two of his three bouts, the loss coming on a disqualification for an accidental punch to the back of his opponent’s head.

Upon returning to the U.S., Foreman faced a final match for a berth on the Olympic squad against Otis Evans, whom Foreman had decisioned in Toledo for the AAU crown. It was on September 21 at the Olympic training site in Santa Fe, New Mexico that George defeated Evans via a unanimous decision, thus becoming the heavyweight representative of the U.S.A. at Mexico City.

In his first contest Foreman defeated Polish southpaw Lucjan Treia, then took care of Romania’s Lon Alexe. In the semi-final, George was matched with the favorite, Giorgio Bambini of Italy. It was in round two that Foreman stopped the Italian with a tremendous right to the head. Then it was into the final against Ionas Chepulis, who was defeated in two rounds when the referee halted matters due to the battering being taken by the Russian.

It was then that George Foreman won his way into the hearts of his countrymen. At the medal presentation, Foreman began waving a miniature American flag, a patriotic gesture which thrilled millions back home who were watching on television.

“I did it, first because I’m an American,” explained George. “Second, because I’m George Foreman, and third, because I was proud to be representing my country. I had on this one robe that I still wear that says on the back, ‘George Foreman, The Fighting Corpsman.’ It was given to me by Doc Broadus. In the pockets I had my lucky beads and a little American flag. After the finals I just pulled out the little American flag. People saw it and applauded, so I waved it around. I didn’t look at it as a protest or anti-protest. It was just the way I felt at the moment.” 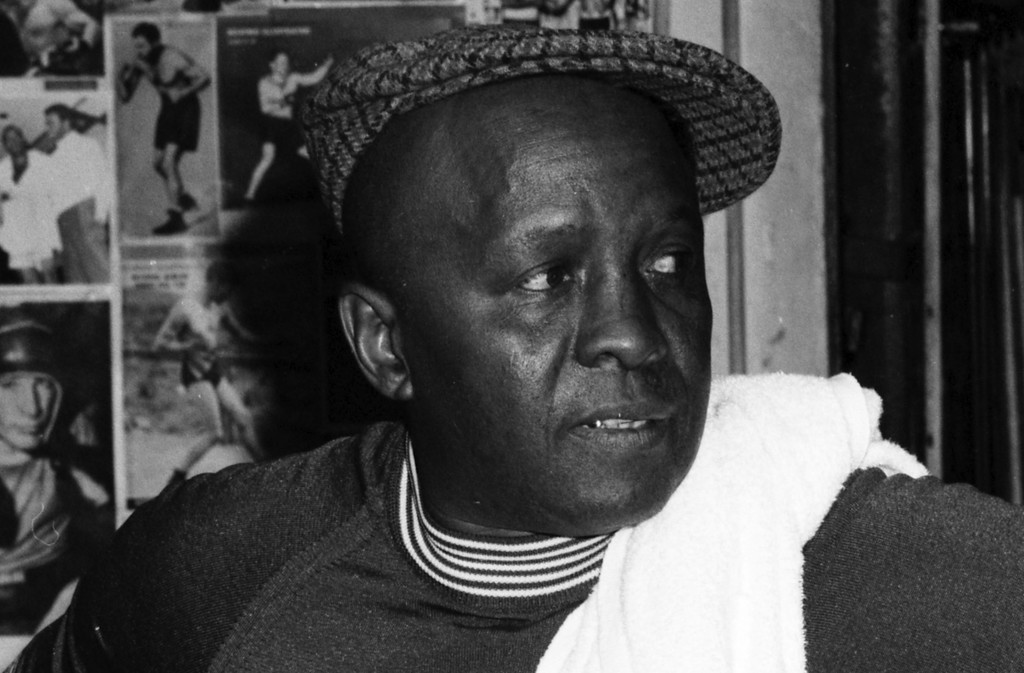 Just as the Job Corps changed his life, so did the Olympic victory. Foreman decided to turn to professional boxing and signed on with Dick Sadler, an old vaudeville song-and-dance man, who was very knowledgeable and had worked with such boxers as Archie Moore, Sonny Liston, Freddie Little and Charley Shipes.

It was a preliminary bout at New York’s Madison Square Garden on the Joe Frazier-Jerry Quarry card. Foreman disposed of Don Waldheim in three rounds. Six more quick kayos followed, among them a three-round stoppage of Chuck Wepner.

It was on October 31 that George was taken the full distance for the first time, winning an eight-round decision over Roberto Davila in New York. Three more knockouts followed before George decisioned Levi Forte in 10 sessions at Miami Beach. Foreman closed out 1969 with a one-round stoppage of Gary Wiler, giving him 13 victories in his first pro year.

George began 1970 with knockouts of Charley Polite and Jack O’Halloran before going the 10-round distance with Gregorio Peralta, a tough hombre from Argentina. Since then, Foreman has scored 22 straight knockouts including the Frazier bout – thus the Peralta bout was the third and last time George has gone the scheduled distance. All three contests, oddly enough, took place in New York.

George scored 12 times in 1970, among his other victims being James J. Woody in three; George Johnson in seven; George Chuvalo in three; and Boone Kirkman in two.

Slowing down a bit in 1971, George was sent to the well by Sadler on seven occasions. His KO victims were Charlie Boston, Stamford Harris, Gregorio Peralta, Vic Scott, Leroy Caldwell, Ollie Wilson and Luis Pires. Peralta, who was halted in the 10th, was the only one to last beyond four rounds. 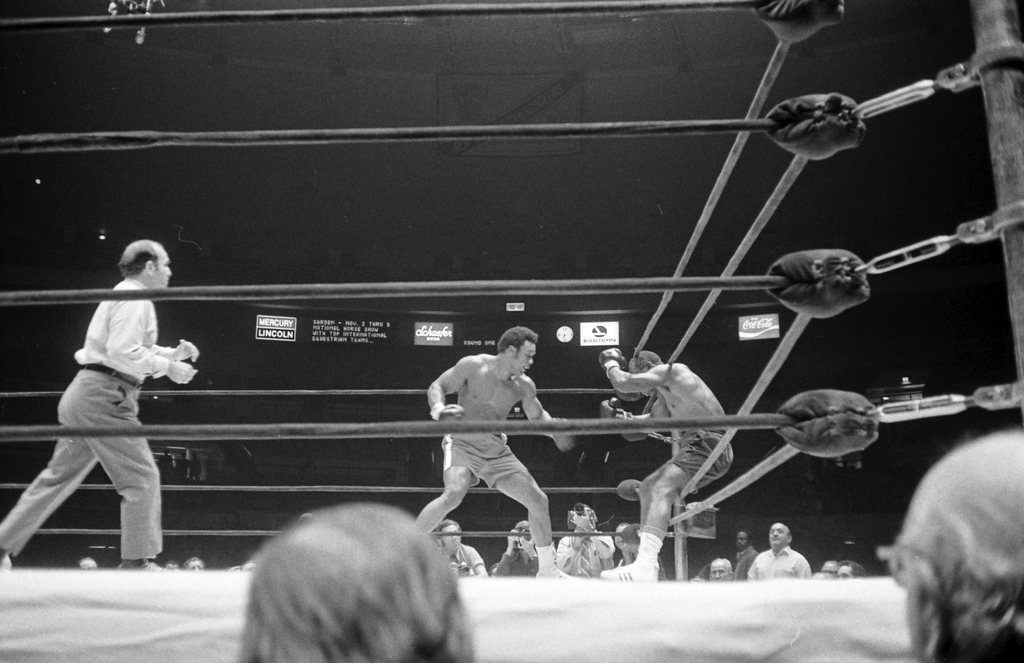 Foreman backs Luis Pires to the ropes during a bout at Madison Square Garden on October 29, 1971. Photo from The Ring Magazine

George’s father, J.D., and his mother, Nancy, both live in Houston. George who loves animals and likes to train dogs, recently became the proud father of a little girl named Michi, born to his wife Adrienne, in Minneapolis. George and Adrienne met on a blind date two years ago.

Foreman makes his home in Hayward, California, where Sadler also resides. George also has a home in Minneapolis, his wife’s hometown.

Archie Moore, one of Foreman’s advisers and handlers, predicted Foreman would stop Frazier. Ol’ Arch says, “George is an excellent fighter. He just needs a little smoothing out.”

It is true that Foreman is a clubber. He wears his opponents down. Every punch George lands is a hurting punch. He’s game, very strong and very determined. He’s a hungry fighter and he’s young. Scaling 6-foot-3 and weighing in the neighborhood of 220, Foreman possesses a reach of 78 ½ inches.

If size, strength and determination alone are the vital factors, then George Foreman will be the heavyweight king for many years to come.

George’s thoughts on the heavyweight title itself are very interesting. He knows he can’t hold it forever.

“The title belongs to the people, not to an individual,” he says. “When it’s my time to go, I’ll exit smiling.”

If George keeps on fighting the way he did against Frazier, he’ll be around long after all the other current pretenders are long gone.