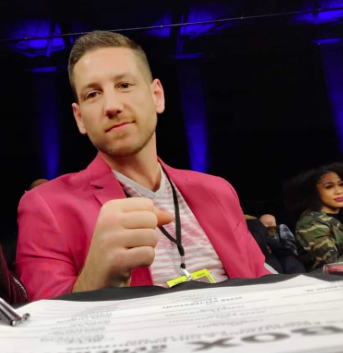 Dr. Andre Foy believes the danger of coronavirus has been over stated and would, with a state's sign-off, be part of a boxing promotion.
04
May
by Michael Woods

No promoter has yet taken the plunge, and set up a pro boxing card inside the US, as the live fight freeze is still in effect, since it began in mid March.

No surprise, maybe, being that the pandemic’s harsh effects are still playing out in America. Word dropped today one model of the coronavirus pandemic favored by the White House nearly doubled its prediction for how many people will perish from the virus in the U.S. by August.

The Institute for Health Metrics and Evaluation at the University of Washington’s School of Medicine is now projecting 134,000 coronavirus-related fatalities, up from a previous prediction of 72,000. Inside the US, we are on the edge of 70,000 deaths from the viral assassin.

But, in all states, to varying degrees, there are pushes, from puppet-masters and also Regular Joes and Janes alike, to get back to business.

UFC’s belligerent bossman Dana White is full steam ahead with his May 9th in Jacksonville, Florida card, UFC 249, and of course, extra eyes will be on that promotion.

People like Dr. Andrew Foy, the cardiologist/promoter, will be curious to see how the logistics play out. Foy is a PA resident, and ran shows from 2017 until, in 2019, he joined forces with fightgame lifer Marshall Kauffman. Marshall rides point for Kings, and him and Foy are pondering now when they can get back to business, after their March 14 show got nixed, for public health reasons.

Kings did their March 13 weigh in, and thought that the show would go on. But sentiment turned, and powers that be thought there’d be too much risk for the public to attend. The show was axed…and so Kings, like all of us, wonders when business will get humming again.

I asked Foy if he agreed with White’s plan to have MMAers trading sweat and blood in the Octagon? 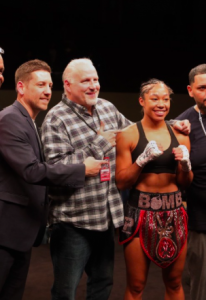 Foy, Kauffman and one of their best hitters, Alycia Baumgardner, exult in a W. All are seeking the go-ahead to fight on.

“I could just tell you that in my opinion, I think it would be okay now,” he said.

Foy continued: “I think it’s a good idea to have people be tested, prior to getting there because you don’t want somebody going to the event, finding out they’re positive and you travel them on airplanes and stuff like that. Although the reality is that this is still occurring every day. People are traveling with the infection and whatnot because we haven’t totally stopped air travel and other things but the optics of it could look bad. So I think you want to make sure that you have the people tested before they travel but otherwise, I wouldn’t personally have huge reservations to be quite honest with you.”

Would Dr. Foy run a mid May card, as part of Kings Promotions, if the state gave the OK?

“I think so and I think it depends where in Pennsylvania, I don’t think we’d want to do in a place like Philadelphia, which is a hot spot, but to do an event in Dauphin County, in Harrisburg, for example, I think that would be okay.”

He’s been monitoring the re-opening pushes in various states. “I think what we’ve seen so far is reassuring,” Foy stated. “Hospitals aren’t overwhelmed. That’s the metric. Really that’s all that matters.”

Marshall Kauffman is Kings CEO. Kings did more pro cards than any other US promoter in 2019, for the record. Are he and Foy putting a return to live action in motion, have they laid any firm groundwork?

“Marshall is enthusiastic to get back as soon as it’s allowable,” Foy said. “I can tell you just from my standpoint as somebody in medicine, I don’t feel uncomfortable about moving forward with it. But I also have to acknowledge and this is one thing that we don’t talk about enough when it comes to how to manage COVID going forward, we have to acknowledge that there’s always going to be a level of uncertainty and then it comes down to people’s risk tolerance. I’m a pretty risk tolerant person and I this is one of the things we study when we look at psychology of decision-making so I don’t feel very uncomfortable with it.”

Of course, the state commission, led by Greg Sirb, will need to be comfortable that risk management is locked down.

“It doesn’t matter so much how I feel or even how Marshall feels, it has to do with what the state commissions are going to allow and what kind of testing that they’re going to mandate. And is it (economically) feasible to comply with and do we have sufficient support to do it is one thing I was talking about with Marshall. We’re doing everything we can to get back to business ASAP. But it’s not up to us.”

I chatted with another promoter, who does business in the US. That person is thinking that yeah, people will see how White does. And said that the situation is still so fluid, that there is nothing close to clarity regarding who will stage fights in the near-ish future.

Some people say, hey, go to a “safe” state, book a show there. Well, getting the fighters to that state, which probably isn’t going to be filled with upper tier professionals who might look to get on the show, that isn’t a slam-dunk.

Maybe a “rebel” state, like Texas, would make sense to place a card. Florida, with the Republican Governor, is seemingly comfortable with the risk of being “first,” in the fight-game space of returning to live action. Texas also has a GOP Governor, and Republicans have been the “get back to work” party, using the line that we “can’t let the cure be worse than the disease.” That’s code, possibly,  for “people have to get out of their houses, and buy shit, or our GDP is goin’ to zero.”

But so much of this comes down to risk tolerance. Some would advise all of you to remember that so many of those business bigs who are talking about us as the land of the free are going to be at home, in a safe zone, while the humble souls will be sent back to the factory jobs, the server jobs. The bigwigs have the best medicine money can buy, it goes without saying, and the lessers may well have no insurance at all. The argument? Basically, consider the motivations of the people whispering in your ear to ‘give you the right to go back to that $12.50 an hour job that doesn’t give benefits, or give you death.’ Because those whispering won’t get as exercised from you dying, as they do knowing their fortunes are circling the drain if they don’t have labor to drive that revenue collection.

Yes, some people are lauding White. “I commend and respect Dana,” De La Hoya said on the CBS podcast. “We did have our differences. When I wanted to get involved with the MMA, I did Chuck Liddell (vs.) Tito Ortiz. It was a huge success. I dipped my toes into the water, and I experienced it. It was actually wonderful. I love the MMA. Dana came out and criticized me and ridiculed me and all that stuff. You know what? Dana is doing a phenomenal job in defending his sport, growing his sport, and he’s doing it big. He’s doing it great, man. I commend him.”

Then, on other wide, Bob Arum is taking a “better safe than sorry” stance on a return to the arena. “Good luck to them,” Arum said to Boxing Scene. “I just hope that they’re not endangering the safety of anyone. But this kind of cowboy behavior doesn’t do anybody any good.” Arum said he wants to let more dust settle, maybe the second half of June could work. “We’re only gonna do this if it’s safe for the fighters and everyone involved, and if it’s approved by the medical authorities. We’re not gonna be cowboys, like Dana White,” Arum continued. “I don’t wanna get politics involved, but I have really very little respect for Dana and what he’s doing.”

Lots of us are now thinking about what a “second wave” of hits from the coronavirus, even as we are still reeling from the first one. What a “second wave” might look like will affect when a pro boxing show gets booked, depending of course on where the promotion is slated to appear. I asked Foy to look a bit ahead…what will things look like in, say, August? 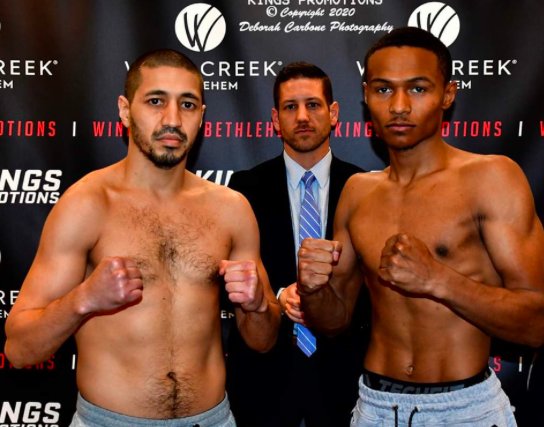 Foy wants to get back in the scrum. He says athletes are young and strong and their immunity to COVID-19 is likely to be superb.

“The answer boils down still to people’s emotions and how they’re going to deal with those emotions and channel it into regulatory policy to be quite honest,” said Foy, and you can hear much more of his take on coronavirus here. “I think that we will see rolling waves of infection after the lockdown is relaxed. I think that there’s going to be places where that leads to overreactions and then people are going to pull the trigger and do more episodes of self-isolation or lockdown whatever you want to call it. But I do think that by August for the most part, the economy will be back to business in a lot of ways particularly in areas that are not hit very hard, but I still don’t think we’ll have fans yet at the events. I kind of think that they’ll that fans will be allowed when football starts again, because football is just so big in this country that people are just not going to be able to tolerate it any longer, and I think the NFL has had a lot of power as well. I think that by August of this year,” Foy finished, “we’ll all feel better than we do now, about about how bad this can be.”

My three cents: White will assume the risk, and could gain much of the reward, if his May 9 event comes off without obvious hitches. Other companies will wait and see, and then perhaps follow suit if the water’s warm. Also, signals from the mega-leagues, the MLB crew and the NFL gang, that will spur movement. But boxing could hop in harder by the end of the month, into June. The roster is small, no need to truck in too much personnel, and the ring doesn’t take up much room…Me, I’d take it to a low infection state, and hold the card outdoors. Infection likes to spread in tighter spaces. I bet we see plenty of live fights in June…Unless we see bad blowback to “second wave” damage, from all those “liberty rallies.”  Then, you might see cans getting kicked toward August.