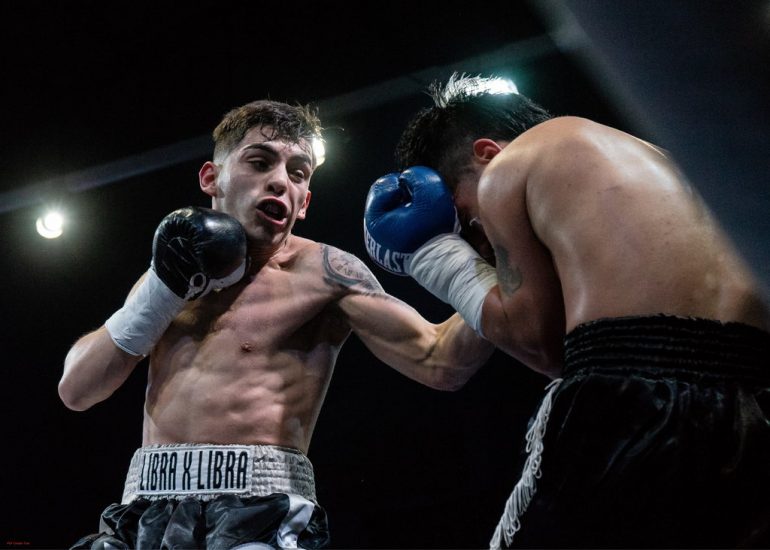 Best night of pro career and why: Campos dropped and outpointed the previously unbeaten Pedro Villegas over 10 rounds for a variety of regional titles. “Thanks to God I can win against a 12-0 guy,” Campos told The Ring. “My pro debut [was special] too.”

Worst night of pro career and why: The 23-year-old rose from a knockdown to entertain the crowd in outpointing Marcos Emilio Villafane. “I don’t know if I have a ‘worst’ night because I have a 9-0 record,” he said. “Maybe in one or two fights I didn’t feel so comfortable and wasn’t so good, but I think I grew a lot in all my fights.”

Next Fight: The working plan was for Campos to fight in Chile in mid-June. Those plans have now been shelved until after the COVID-19 pandemic is resolved. “I keep training at home, hitting the bag and running on a treadmill,” he said. “I am keeping fit and as soon as this is over, I’ll return to the gym and immediately prepare for a fight.

Why he’s a prospect: Campos is a five-time Chilean national champion and that is a solid achievement.

He was the Chilean Boxing Federation Centenary International champion, the South American champion, and he won the Dolphin Cup in Brazil in 2016.

Campos has gained experience from his amateur days, training in Australia, Brazil, Cuba, the Dominican Republic, Ecuador, Mexico and Peru.

In March 2019, Andrew Moloney traveled to Chile and stopped Campos’ countryman Miguel Gonzalez in a world title eliminator. It was during that time that the young prospect caught the eye of Moloney’s manager.

“Andres and his team were so welcoming, just good-hearted people,” said Tony Tolj. “I’m always about giving back. I could see the passion, the desire but, most importantly, the raw ability of Andres.

“We have partnered with Nico ‘Maverick’ Martinez and formed ‘Dragon Fire Latino’, based in Chile, to give Andres every chance to fulfill his potential. Campos is now a superstar in Chile.

“We have had Andres ‘Crocodile’ Campos train and fight in Australia, and every day he gets better and better. There’s a long way to go, but we are moving in the right direction and we’ve been stepping him up. I truly believe that Campos will usher in a golden age of Chilean boxing. ‘Crocodile’ Campos is ready to take a bite out of the flyweight division.”

Campos feels that he has a few key assets. “I believe that my greatest strength as a boxer is the effort, the commitment, the desire to advance and grow,” he said. “My greatest virtue in the ring is my speed, and I try to be smart all the time.”

Why he’s a suspect: Campos is a big fish in a small pond at home, but on the world scene he’s a small fish in a big pond.

How will Campos perform when he’s moved up a level? He appears comfortable right now and will benefit from a few more 10-round bouts before moving on.

The lighter weights are full of talent, so it won’t be easy for Campos. With most of the top fighters in his division residing in Asia, it’s almost certain that he’ll have to go on the road. Can he secure wins in enemy territory?

The Chilean fighter possesses a strong work ethic, but he has a modest 22-percent knockout ratio. If he’s not stopping fighters at this stage, how will he hold off fighters as the competition grows stronger?

“I think I have to improve many areas of my boxing,” he openly admitted. “I am 23 years old and this is just the beginning. I would like to put more pressure on my opponent. I like to be smart in the ring and listen to instructions.”

Storylines: Campos was born and raised in the Chilean capital of Santiago de Chile. He is one of six children. His mother took care of the family, and today she combines a day job with university.

“I was a drug addict and had bad habits when I was young,” he said. “I grew up in a poor neighborhood, with easy access to drugs and crime.

“When I was younger, I was a problem boy. I fought on the street and at school. I found boxing with some friends when I was 15 years old.

“I owe my life to boxing and that is why I will be the first Chilean world champion.”

Manny Pacquaio is a big inspiration to Campos for several reasons. “For his history, for his humility and for being a tremendous boxer,” he offered. “I identify with his boxing style, with his beginnings, and I intend to be like him.”

Campos has a long-term girlfriend and dedicates his time to boxing.

“I train from Monday to Saturday, doing double or triple sessions,” he said of his training regime. “I will not rest until I become world champion, and I intend to stay at the top for a long time.”